EU, Canada and US impose new sanctions on Russia

The EU, Canada and the US have announced new sanctions targeting individuals and companies. They come in response to Russia's actions in the Kerch Strait, the detention of Ukrainian sailors and the annexation of Crimea. 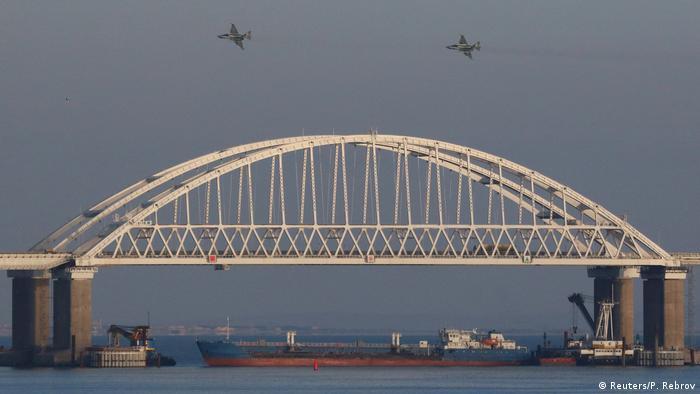 The European Union, Canada and the United States slapped new sanctions on a number of Russian individuals and entities on Friday for their involvement in a naval standoff in the Kerch Strait in November 2018.

EU sanctions target eight senior Russian security personnel and military officers responsible for detaining three Ukrainian vessels in disputed waters off the coast of Crimea, which Russia illegally annexed in 2014. Twenty-four Ukrainian sailors were taken into custody when the ships were fired upon and then seized on November 25, 2018. They are still in Russian detention.

Russian provocations 'will not go unchecked'

Canada imposed sanctions on 15 entities and 114 individuals. A statement released by Canadian Foreign Minister Chrystia Freeland read: "Canada and its allies are unwavering in our support for Ukraine's sovereignty and territorial integrity. Russia's provocations in the Kerch Strait and its illegal and ongoing occupation of Crimea will not go unchecked."

The United States announced that it would impose sanctions on four members of Russia's FSB security services as well as six defense companies active in Crimea, "several of which misappropriated Ukrainian state assets to provide services to the Russian military" during the annexation of Crimea.

Unified call for the release of detained Ukrainian sailors

US Treasury Secretary Steven Mnuchin said, "The United States and our transatlantic partners will not allow Russia's aggression against Ukraine to go unchecked" when announcing the measures. The US also imposed sanctions on two Ukrainian separatists for their support of "illegitimate separatist government elections."

"We call upon Russia to immediately return to Ukraine the seized vessels and detained crew members," said US State Department spokesman Robert Palladino, adding, "We also call on Russia to respect Ukraine's sovereignty and territorial integrity within its internationally recognized borders, including its territorial waters."