A Crimean court has ordered that several Ukrainian sailors be detained for two months pending trial after a flare-up with Russia’s coastguard. They face charges that could eventually carry a 6-year jail sentence. 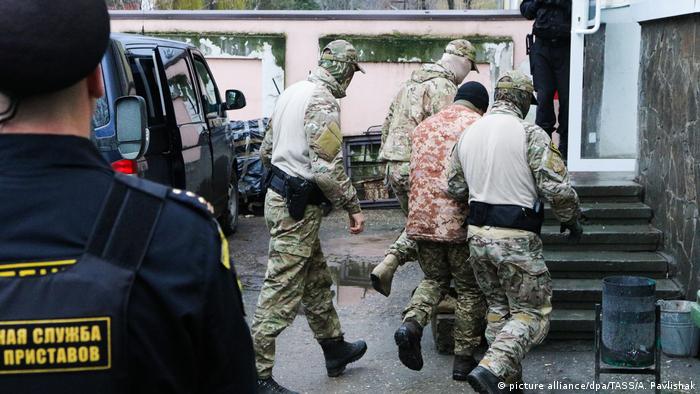 A court in the Russian-annexed Crimea region on Tuesday ordered that several Ukrainian sailors be remanded for two months, pending trial, after their naval confrontation with Russian forces.

The detained individuals, who were among more than 20 naval personnel taken into custody on Sunday, are to be held until at least January 25. Several other sailors were expected to appear before the court in the city of Simferopol on Wednesday.

While Kyiv says Russia is holding 23 sailors, Moscow puts the number at 24. Ukraine's Foreign Minister Pavlo Klimkin said he had asked the Red Cross to visit the group.

Russian state television featured interviews with three of the men on Tuesday. In this footage, sailors agreed with Russian claims they had violated an international border — charges that can carry a jail sentence of 6 years.

Although it was not immediately clear if they had spoken under duress, Ukraine's SBU intelligence agency demanded that Russia stop using "psychological and physical pressure" against the men.

Read more: What you need to know about the Sea of Azov conflict

Russia and Ukraine have blamed each other for the clash in the Kerch Strait, which links the Black Sea with the Sea of Azov — a body of water containing both Russian and Ukrainian ports. Since the annexation of Crimea by Moscow in 2014, a bridge has been built across the strait, connecting the Crimean peninsula with Russia.

Russian maritime border guards on Sunday opened fire on three Ukrainian naval vessels sailing from the Black Sea port of Odessa to Mariupol, on the Sea of Azov. Ukraine alleges that a Russian ship also rammed one of its boats.

Russia then seized the vessels and the crew members, claiming they had entered Russian territorial waters without permission. Ukrainian authorities said they had given advance notice to Russia that the boats would be moving through the strait.

The Kremlin on Tuesday warned that Ukraine's declaration of martial law in border and coastal areas could lead to a flare-up of hostilities in the country's conflict-ridden eastern provinces.

Members of the Kyiv parliament on Monday adopted a motion that allowed President Petro Poroshenko to declare martial law for 30 days.

Germany has offered to mediate between Russia and Ukraine.

The Kremlin said Russian President Vladimir Putin did not plan to speak to his Ukrainian counterpart about the incident. Russia has claimed the confrontation was engineered by Poroshenko as a ploy to delay Ukraine's March presidential election, with polls putting the incumbent well adrift of the leading candidates.

The German government has called on both Ukraine and Russia to de-escalate following a military crisis near the Crimean peninsula. Russia has seized three Ukrainian ships. (26.11.2018)