Germany offers to mediate between Russia and Ukraine | Europe | News and current affairs from around the continent | DW | 27.11.2018

Germany offers to mediate between Russia and Ukraine

German Foreign Minister Heiko Maas has said Germany could mediate between Ukraine and Russia in the ongoing crisis in the Sea of Azov. But some critics in Germany are calling on Berlin to help Kyiv militarily.

Women in the Azov battalion in Ukraine

Angela Merkel and various members of her Cabinet have appealed to both sides of the Ukraine-Russia conflict to de-escalate amid Ukraine's calls for more military support from Germany and NATO.

A major crisis in the four-year conflict was triggered on Sunday when Russia fired on and seized three Ukrainian navy ships entering the Sea of Azov through the Kerch Strait. Russia accused the crews of a border infraction, and the Russian intelligence agency FSB said the presence of intelligence officers on board, admitted by Ukraine, amounted to a "provocation."

The German chancellor phoned Vladimir Putin on Monday evening to emphasize the "necessity for de-escalation and dialogue," government spokesman Steffen Seibert said in a statement. For his part, the Russian president condemned Ukraine's "provocative behavior" and said he hoped Berlin could "influence" Ukraine to refrain from such actions in the future. Putin also expressed concern about Ukrainian President Petro Poroshenko's decision to impose martial law for 30 days.

Poroshenko warned on Tuesday of the threat of war as Russia had increased its military presence on the border: "I don't want anyone to think this is fun and games. Ukraine is under threat of full-scale war with Russia," he said during an interview on national television.

The tentative solution hashed out by Merkel and Putin, Seibert reported, was "an analysis of the incident with the participation of Russian and Ukrainian border-security experts." The two leaders agreed to consider this option.

Read more: What you need to know about the Sea of Azov crisis

Normandy Format to the rescue

Meanwhile, Foreign Minister Heiko Maas has said France and Germany have offered to mediate between the two countries — albeit within the framework of the so-called Normandy Format, which has seen government officials from France, Germany, Ukraine and Russia meeting occasionally for the past four years to oversee the implementation of the Minsk cease-fire treaty between Ukraine and the Russian-supported separatists in Donetsk and Luhansk. 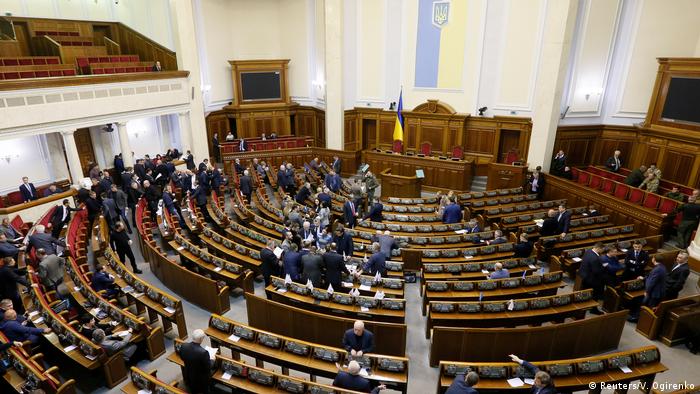 The Ukrainian parliament in Kyiv has imposed martial law

The quartet convened in Berlin on Monday, when the four countries had agreed "to work on a solution," Maas said during the Körber Foundation's Foreign Policy Forum in Berlin on Tuesday. "We have to do everything to achieve a de-escalation in order to prevent the crisis turning into a much more serious danger to the security of Europe," he said.

Norbert Röttgen, chairman of the German parliament's foreign policy committee, said Russia had broken international law during the incident. "We have to steer the military conflict onto political tracks and insist that Russia cooperate with Ukraine and return to the rule of international law," he told reporters. He also refused to rule out calling for new sanctions against Russia.

German Defense Minister Ursula von der Leyen added her voice to the chorus of western leaders calling on Russia to release the 23 Ukrainian servicemen detained on Sunday on board the three vessels — two artillery boats and a tugboat. 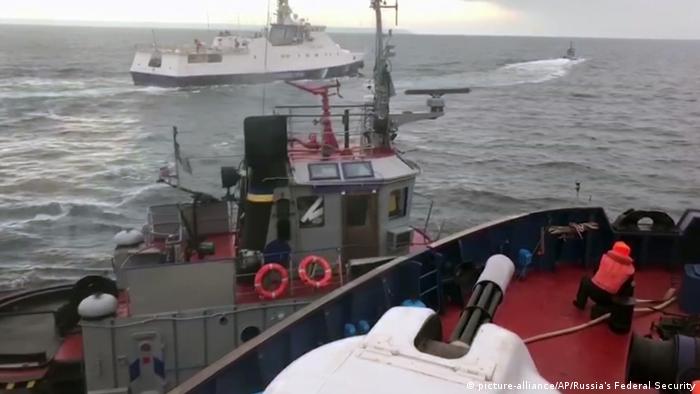 "In this current situation, both sides, Russia and Ukraine, must show that they are actively contributing to de-escalation," she said at a security conference in Berlin, according to Reuters. "The seized ships and sailors must be released; Ukraine must present evidence of the exact events. Russia must guarantee free passage through the straits and not act disproportionately."

Kremlin spokesman Dmitry Peskov said on Tuesday that the Ukrainian men were in the hands of the courts and the Russian government had no say in their release. They are likely to be arraigned on charges of violating Russian borders by entering the waters of the Crimean Peninsula, annexed by Russia in 2014. Ukraine still claims Crimea as part of its territory. It remains unclear whether or not the boats were in international waters when they were seized.

But the calls for stronger action from Germany against Russia have also grown in the past day. Ukraine's ambassador to Germany, Andrij Melnyk, called on Germany to provide military help. "We expect from our German partners that navy ships of the EU and NATO be sent to the Black Sea and the Sea of Azov as soon as possible in order to prevent such acts of war from Moscow," he told the Bild newspaper.

Roderich Kiesewetter, foreign policy spokesman for Merkel's Christian Democratic Union (CDU), also suggested that Germany needed to do more than make diplomatic complaints. "The crisis in the Sea of Azov has been building for a long time and has not received enough international attention," he told DW in an email.

He added that if the ships aren't returned, the EU should impose further sanctions on Russia and consider supporting the Ukrainian coast guard. "Complaining about violations of the law and making declarations of solidarity won't be enough to get Russia to back down," he said.

US President Donald Trump told the Washington Post newspaper on Tuesday: "I don't like that aggression," in reference to the maritime clash between Russia and Ukraine. Trump also suggested he may not meet with the Russian president at the G20 summit being held in Argentina on Friday and Saturday. "Maybe I won't even have the meeting," with Putin, he said.

The US ambassador to the United Nations announced the planned meeting on Twitter. Russia said it opened fire after the Ukrainian ships illegally entered its territorial waters on Sunday. (26.11.2018)