Moscow and Kyiv are locked in dispute over an incident in the Kerch Strait off the coast of the Crimean Peninsula. What is it all about? 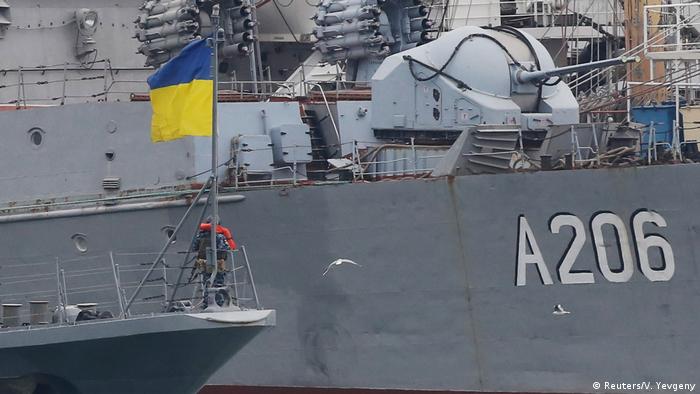 The events since Sunday

On Sunday in the Kerch Strait off the coast of the Crimean Peninsula, the Russian navy stopped three Ukrainian military vessels from passing into the Sea of Azov. The ships were en route from Odessa on the Black Sea to Mariupol on the Sea of Azov, Ukrainian officials said. The Russian side was informed about the move, according to the Ukrainian navy command. But the Russian Federal Security Service (FSB), which is also responsible for border protection, claims that the ships illegally entered Russian waters. The FSB alleges that crews did not comply with demands to stop. In the scuffle, a Russian border patrol ship rammed and damaged a Ukrainian Navy tugboat. Russian forces later seized all three Ukrainian ships, confiscating them for violating Russia's border. Six Ukrainian navy soldiers were injured, the Ukrainian navy reported. 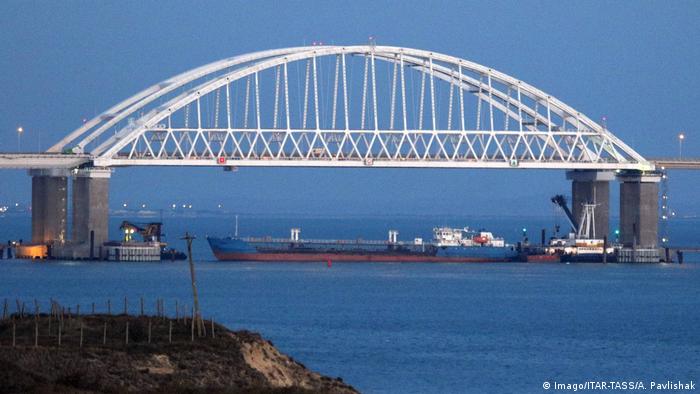 The controversial Crimean Bridge across the Kerch Strait

Why the Kerch Strait is important

The Kerch Strait is the only connection between the Black Sea and the Sea of Azov, and the only way to reach two important Ukrainian ports, Mariupol and Berdiansk. The route is vital for Mariupol's two large metallurgical plants. Russia has controlled the strait since annexing Crimea in 2014, which has made traffic significantly more difficult for Ukrainian ships. The consequences of Russian control have become particularly noticeable since the completion of the Crimean Bridge in May 2018. The bridge connects the Russian mainland with the occupied peninsula. The FSB inspects all ships bound for Ukraine, sometimes taking days, which has aggravated the situation. The volume of freight has steadily declined since then. The war in Ukraine's Donbass region is also problematic for Ukraine's ports.

Ukraine and Russia accuse each other of violating international maritime law. They refer to the 1982 UN Convention on the Law of the Sea, which both states joined in the 1990s. Ukraine insists on freedom of movement in the Kerch Strait and the Sea of Azov in accordance with this agreement, while the Russian side is trying to draw territorial borders. The countries also have a bilateral agreement on the free use of the Kerch Strait and the Sea of Azov, an accord that Russia has never called into question.

As a result of the incident in the Kerch Strait, Kyiv has proclaimed martial law for the first time in its conflict with Russia. Ukrainian President Petro Poroshenko signed a decree on Monday that was approved by the country's parliament. According to the government, the move is a defensive response and not a declaration of war on Russia. The president's decision is seen as controversial, even in Ukraine. Initially, martial law will only be introduced for 30 days, a time frame in which the rights of Ukrainian citizens, such as freedom of assembly, can be restricted. Speculation is rife as to whether presidential elections can take place in March 2019 as planned. Should martial law be extended, the elections would be called into question.

This most recent escalation in the Kerch Strait is aggravating the already existing conflict between Ukraine and Russia that began after the annexation of Crimea in 2014. Russia occupied the Ukrainian peninsula after the fall of Ukrainian President Viktor Yanukovych in what initially was a covert action that eventually led to official annexation. The Russian leadership justified its actions by pointing to the results of a controversial referendum held on the peninsula at short notice and under the supervision of the Russian military. The annexation of Crimea is not recognized by Ukraine, or by the international community. The dispute over the peninsula has already led to several international court cases, most of them initiated by Kyiv.