The war in eastern Ukraine has arrived at the Sea of Azov port town. The city center is deserted, the situation uncertain. One in five people here is an inland refugee. Christian F. Trippe reports from Mariupol. 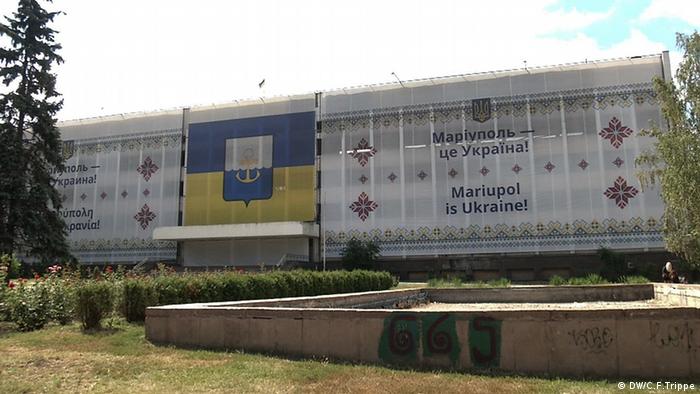 The war has moved into the suburbs of Mariupol: It sleeps during the day, and rages at night. The demarcation line dividing the separatists from areas more or less controlled by the Ukrainian government is about six kilometers (3.7 miles) outside the city limits.

The war in Donbass has left its mark on the port city. The former police headquarters is covered by a tarp. It hides the fact that the building can no longer be used because so many of its offices have been burnt out.

"Mariupol is Ukraine," is written across the tarp in four languages - Ukrainian, Russian, English and Greek. Mariupol is an ancient Greek commercial settlement, a polis, in which some 20,000 Greeks still live today. The police headquarters was occupied by separatists in the spring of 2014; then fighters from the Ukrainian "Azov" volunteer battalion drove them out.

Yet normalcy did not return with the liberation of Mariupol. Evenings, the city seems strangely deserted, despite high summer temperatures, there are very few people moving about. Only a few motorcyclists hang out in front of a bakery near the city theater - which only advertises Russian-language plays. Taxis drive past, but they pay no attention to the few tourists that attempt to hail them. 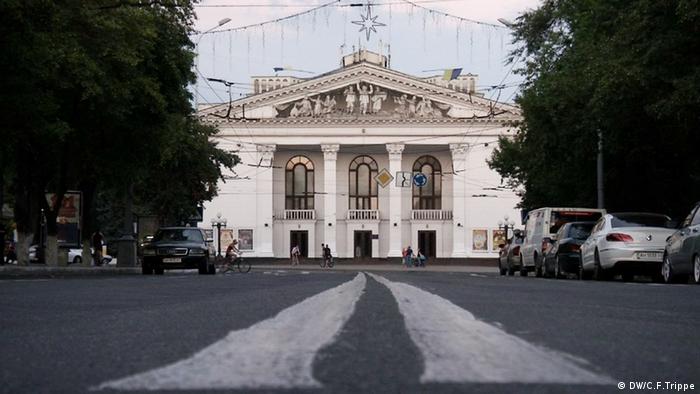 The streets of Mariupol are empty - most people are staying home

Nevertheless, many people have fled to the city - Mariupol's population has grown by roughly 100,000 residents since the war began. According to the Ukrainian government, some 1.8 million people in the country are now inland refugees. The UN Refugee Agency (UNHCR) estimates the number to be around one million. Numbers are imprecise because many residents have not registered as refugees. Others have registered despite the fact that they are not on the run, but rather have remained in areas controlled by the separatists. In order to receive their Ukrainian retirement payments they must prove that they reside in non-occupied areas.

Those who have to make the arduous journey across the demarcation line each month are happy to pick up the supplementary inland refugee payment. And that is having consequences for the Ukrainian welfare state and the people that live here. Yelyzaveta Levchenko and her family are officially registered as inland refugees. After fleeing Luhansk in the summer of 2014, the mother of four and her husband have been living in a suburb of Mariupol.

Lots of uncertainty - but no money

Ukraine pays her and her family 70 euros ($77) in child benefits and about 90 euros special assistance for inland refugees each month. The family of six cannot live on this 160-euro payment, especially since neither parent is currently employed. And now even this money has stopped - the government has been unable to hand out the payments since May. 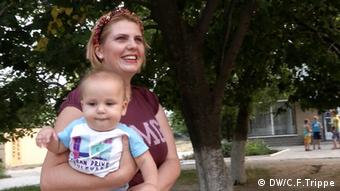 Yelyzaveta Levchenko fled with her family to Mariupol two years ago

That is a catastrophe for Yelyzaveta, who says "pension tourism" from the occupied areas is the reason for the impasse."The state has no idea how to continue dealing with the inland refugee problem," she told DW.

At least the city itself has come up with a few ideas, and with the help of the UN it is connecting organizations that care for refugees.

But much more has to be done in the meantime says Pablo Mateu, director of the UNHCR in Ukraine. "We can repair their houses, but if there aren't any jobs people will not return to their villages. That is exactly where economic and development programs must be directed."

But such programs cost money - money that the Ukrainian government will not be able to raise for some time. The societal consequences of the war and the repair of infrastructure in the Donbass will continue to be a challenge for the national budget for generations.

First, tiny steps will have to do, even those that are merely symbolic. Mariupol, which, thanks to the help of non-governmental organizations (NGOs), has been able to master the flow of inland refugees surprisingly well, bears the title "City of Solidarity" - the UN has designated it as such for its generous reception of inland refugees.

The Deputy Minister for the temporarily occupied territories, George Tuka, hopes that the honorary title will serve as an example for others. "Ukrainian society should show solidarity with Mariupol, now home to more than half a million people and where shots are being fired every day."

Vladimir Putin's conscription drive to bolster his forces in Ukraine is being met with resistance. More than 1,300 people have been arrested at nationwide protests. And many men of draft age are leaving the country while they can.

As Russia threatens to annex more Ukrainian territory, Oleg Ustenko, economic adviser to the Ukrainian president, wants the EU to agree on even tougher sanctions against Russia.