Crimea's parliament has requested annexation by Moscow. The move came after final results from Sunday's referendum showed that 96.8 percent of Crimeans have voted to break away from Ukraine. 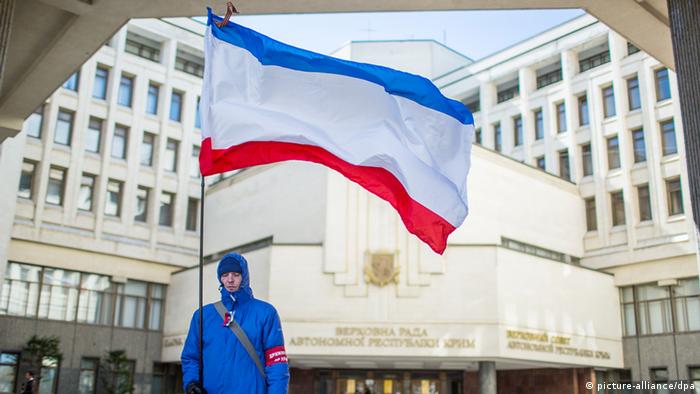 On Monday morning, electoral officials in Crimea confirmed the official results of the peninsula's referendum. According to the head of the referendum commission, Mikhail Malyshev, 96.8 percent of ballots cast had voted yes for the region to join the Russian Federation. Voter turn out was estimated at 83 percent, a high figure considering that many opponents on the motion had pledged to boycott the ballot.

Soon after the official results were made public, the Crimean parliament convened to officially request annexation by Moscow and to declare independence.

"The republic of Crimea appeals to the United Nations and to all countries of the world to recognize it as an independent state," a document approved by Crimea's regional assembly said on Monday.

"The activities of state institutions of Ukraine on the territory of Crimea are finished and their powers, their property and their budgets are transferred to the state organs of the Republic of Crimea," the statement said.

Russian President Vladimir Putin was scheduled to address a joint session of the Russian parliament on Tuesday to discuss Crimea, according to Russian media reports.

Meanwhile, Ukraine's parliament approved a presidential decree to partially mobilize a military reserve unit within the next two months, according to news agency Reuters. The plan, which would involve some 40,000 reservists, was aimed at preventing "a repeat of the Crimean scenario in Ukraine's southeastern regions," the Ukrainain secretary of the National Security and Defense Council, Andriy Parubiy, said on Monday.

Russian media outlets praised the outcome of Sunday's referendum, hailing Crimea's decision to become part of the Russian Federation over remaining in Ukraine, whose interim government favors closer ties with the EU.

"Crimea is returning to Russia," the widely-circulated newspaper Komsomolskaysa Pravda said. The Black Sea peninsula fell under Russian rule until 1954 when Soviet officials transferred its power to Ukraine.

Referring to Western leaders' rejection of the vote, the Izvestia newspaper said: "Someone may not like it, but we are happy."

Meanwhile, EU foreign ministers were scheduled to meet at 9:30 local time (0830 UTC) in Brussels to decide whether to impose sanctions such as visa bans and asset freezes on Russian authorities.

"You can't simply sit back and say this situation can be allowed to happen," EU foreign policy chief Catherine Ashton said ahead of the Monday meeting. "I call upon Russia yet again to meet with Ukrainian leaders and to start dialogue with them, and to try and move to de-escalation please as quickly as possible."

German Foreign Minister Frank-Walter Steinmeier told the German daily newspaper Bild that the EU would waste no time responding to the situation.

"Europe will give a clear and definitive answer to the referendum which violated international law," Steinmeier said, adding that it was, however, necessary that "every effort be aimed at avoiding a further escalation [of the crisis]."

Russia's actions in the Ukrainian crisis have deeply worried foreign leaders, who fear that the rising tensions in eastern Europe could foreshadow further Russian aggression.

Following the ouster of Ukrainian President Viktor Yanukovych in February, Russian President Vladimir Putin deployed troops to the Crimean peninsula, where they have gradually taken over Ukrainian military bases. While the Russian leader admitted to providing political support to ethnic Russians in Ukraine who felt threatened by the pro-EU interim government in Kyiv, Putin has denied sending troops to the region.

Members of the Group of Eight have already suspended preparations for a planned summit in Sochi this June in response to Moscow's political actions over the past month.