Crimean Tatar leader Refat Chubarov tells DW why he called for a boycott of the referendum in Crimea and why he thinks the international community must act. 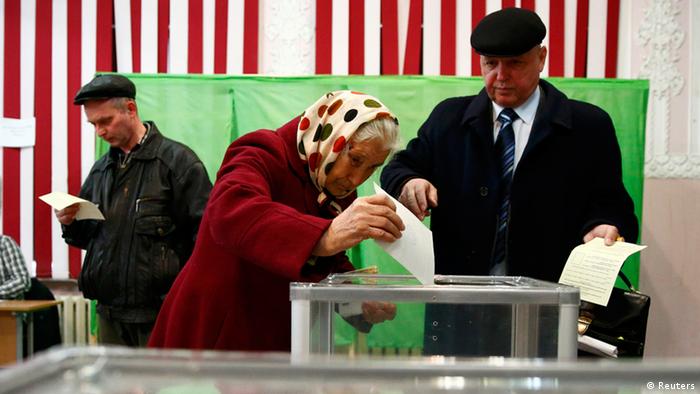 The population of Crimea has voted in favor of the Autonomous Republic of Crimea should joining the Russian Federation, but the chairman of the Mejilis - the unofficial political association of the Crimean Tatars - explains why his community opposes the referendum.

The Crimean Tatars are a Turkic ethnic group that currently make up 12 percent of the Crimean peninsula's population. During World War II, they were accused of collective collaboration by Stalin and deported.

DW: Mister Chubarov, why did you call on the Crimean Tatars to boycott the referendum on the future of Crimea?

Refat Chubarov: We have not only appealed to the Crimean Tatars, but also to various other ethnic groups and denominations in Crimea. We've called on them to actively boycott the referendum, not to take part in the voting, because the referendum is illegal. It is against current Ukrainian law. It is being carried out even as foreign troops have occupied the whole of Crimea. People are in a state of fear about their future - and their present. 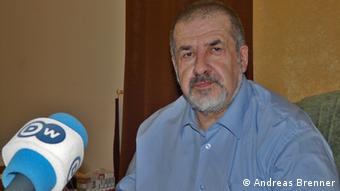 The so-called referendum and its aftermath will be exploited to maximum effect by the leadership of the Russian Federation for their further political undertakings. The consequences for Crimea and all its inhabitants will be even harder than what is happening today.

I'm not even going to talk about insignificant details like the fact that the referendum was announced 10 days before it was carried out, and the fact that there was no opportunity nor any provisions for people to calmly discuss the questions that are being put forward in the vote. We are sure that our position is the right one in this case, because the international community considers this referendum to be unlawful.

You've just warned about the "further political undertakings" by the Kremlin. What do you mean by that?

The forceful annexation by one government of parts of another country under the cover of a simulated referendum - especially since this is a simulation that is being carried out at gunpoint - is the most horrible act of political speculation that could take place in the 21st century. It is a threat to the entire world order.

Russian President Vladimir Putin called you in the run-up to the referendum. What did you talk about?

He didn't call me. [Tatar community leader and former head of the Crimean Tatar Mejlis] Mustafa Dzhemilev was the one who talked to Putin. He made our position known to Putin, which is that there isn't any issue that can't be resolved in other ways and by other means - without sacrificing the territorial integrity of the Ukrainian state.

Be that as it may, the result of the referendum seems to be a foregone conclusion. What actions will you take after Crimea takes the decision to become part of Russia?

I wouldn't say the result of the referendum is a foregone conclusion because of the position of a majority of the Crimean population. If these sorts of measures had been put up for discussion under normal circumstances - without the deployment of troops and in a period when a comprehensive discussion of these kinds of questions could take place - then I am sure that no more than 30 to 35 percent of the Crimean population would be in favor of them.

You can only talk about a foregone conclusion for this referendum because the result has been predetermined. And the result isn't being determined in Crimea. No matter how many people turn up, they will paint the picture they need to paint.

So where was the result determined?

Well, certainly not in Crimea and not in Ukraine.

So in Russia, then?

All the same, what actions will you take when the results of the referendum begin to be put into practice?

The whole mechanism of international law in all its aspects must be set in motion - not only the political elements but the economic and human rights ones. We will continue to live in our homeland. We have a lot of experience gathered in various historical circumstances and we know that these sorts of undertakings don't last for ever.

Will you recognize the new authority in Crimea?

I think that we will proceed within the legal framework that is defined by the international community. And to be honest, I would like the governments of Western countries to find the answers to these questions. Especially the countries that have taken, let's say, a liberal position towards Russian politics.

But the current situation has turned out to be so unusual that all the governments, including Germany, have adopted a very clear and tough position. And we are waiting for measures to be taken.

The current Crimean government has already suggested its own measures with regards to the Crimean Tatars: a 20-percent representation in governing bodies. And the Kremlin, is seems, is prepared to provide monetary assistance. What do you think of these promises?

I don't know of any situations in the history of human civilization when injustice could be the basis for even the slightest positive expectation of things changing for the better.

The interview was done before the results of the referendum were known.

Sanctions and harsh words for Russia matched with solidarity with Ukraine's interim government: The US president has exhausted his options in the Crimea crisis, but his Russian counterpart still has cards to play. (14.03.2014)