Crimea: A breach of international law | Europe| News and current affairs from around the continent | DW | 08.03.2014

Armed soldiers are in control in Crimea. Politicians and legal experts have accused Russia of breaking international law. Moscow insists that it has not contravened any agreements, but its arguments do not stand up. 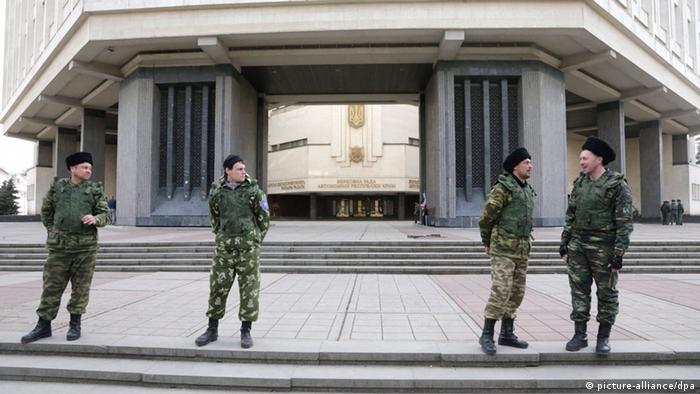 "What the Russian leadership has done in Crimea is in clear contravention of international law," said Jean-Claude Juncker in an interview with the German broadcaster Deutschlandfunk. The former prime minister of Luxembourg, currently the leading election candidate of the conservative bloc in the European parliament, did not mince his words. "This does not constitute abiding by the obligations that the Russian leadership made in the 1990s with regard to Ukraine and Crimea," he said.

German Chancellor Angela Merkel seems to agree. The deputy spokesman for the German government, Georg Streiter, confirmed that Merkel had accused Russian President Vladimir Putin over the phone of conducting an "unacceptable Russian intervention in Crimea."

The United Nations Charter, which forms the basis for international law, forbids countries from starting wars of aggression. Russia, however, is convinced that military intervention across its border does fall under international law. Putin has justified sending soldiers to Crimea on the grounds that the lives of Russian compatriots are in danger. 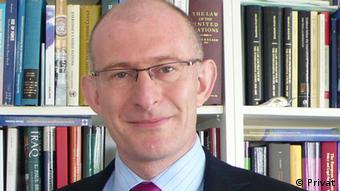 Talmon: Events in Crimea do not conform with international law

However, Stefan Talmon, a professor of international law at the University of Bonn, argues that Putin is wrong. "There is no circumstance under international law in which it is permissible to send armed troops into another country to protect sections of the population there," he said.

This, he explained, means that a country's territorial integrity and political independence takes precedence over protecting the population. Without the permission of the UN Security Council, not even the gravest violations of international law or genocidal acts are sufficient grounds for intervening in another country. "If not even humanitarian intervention is generally recognized, then what is happening in Crimea right now does not in any way conform to international law," Talmon told DW.

Sending in troops would, he said, only be compatible with the UN Charter if the Ukrainian government asked Russia for help. "A government in exile can also issue such an invitation," said Talmon, "and ex-President Yanukovych is currently in Russia." 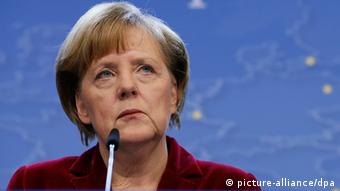 However, this option is only legitimate if the new government has come to power by way of a coup, Talmon explained, and in the case of Ukraine, Yanukovych was ousted by the Ukrainian parliament. Nonetheless, Russia's ambassador to the UN Vitaly Churkin justified the military intervention before the UN Security Council by saying that Yanukovych had requested "the restoration of law and order." Meanwhile, Talmon says, other voices in the Russian government in Moscow insist that they sent the protection force on their own initiative.

The problem, as the legal expert points out, is that this argument is contradictory: "You can't say, on the one hand, 'There are no Russian troops in Crimea,' and on the other, 'The Russian troops are there by invitation.'"

The peninsula has been sealed off by uniformed soldiers who do not have Russian insignias on their uniform, along with Russian soldiers who are already stationed in Crimea according to an agreement with Ukraine, which is valid until 2042. Russia claims that the soldiers are a kind of civil defense unit made up of Crimeans in favor of integration with Russia.

However, even if it was not Russia who sent the troops, this changes nothing in terms of the legal situation, according to Talmon: "Even then it would still be a breach of international law." The people described as "armed civilians" have a professional manner which, he says, can only imply that they are indeed Russian troops. But "even if that were not the case, international law forbids states from equipping and supporting irregular armed groups in another state." 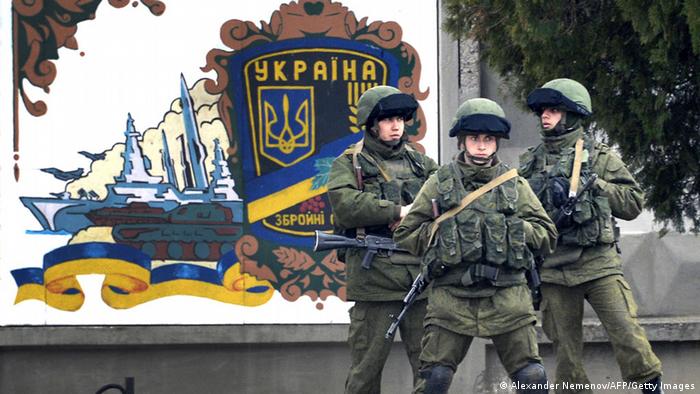 However, Talmon believes that Russian contravention of the UN Charter is unlikely to make much difference to the situation in Crimea. "The problem is," he says, "that international law is hard to enforce."

In an interview with DW, Otto Luchtenhandt, an expert in constitutional law, warns that the referendum scheduled for mid-March, in which the residents of Crimea will be asked to decide the future of the peninsula, is unconstitutional, and that this may fan the flames still further. "Article 73 of the Ukrainian constitution states very clearly that questions of Ukraine's territorial sovereignty can only be decided by referendums put to the whole of the population," he said.

In Stefan Talmon's view, the logical consequence of this is that any declaration of independence from the Ukraine by Crimea would be invalid under international law. "There are hardly any countries that would be prepared to recognize Crimea as a part of Russia," he says, pointing out that the declaration of independence by northern Cyprus resulted in a similar situation. When the region broke away from Cyprus in 1983, it was occupied by Turkish soldiers. To this day, however, Turkey is still the only country to recognize it.

Talmon also sees parallels with the NATO intervention in Kosovo in 1998. "The West walked all over international law back then, and Russia's behavior now is similar," he says. "Six years after it declared independence, the Republic of Kosovo is recognized by only 100 states; 90 states do not recognize it."

Where the situation in Crimea differs, he says, is that in the case of Kosovo nine years elapsed between NATO's military intervention and the declaration of independence, during which time the region was administered by the United Nations. "A similar process is now supposed to take place within a matter of days, and in the presence of Russian troops," Talmon comments.

European politician Jean-Claude Juncker, at least, has expressed a clear opinion with regard to Russia's actions. "We have to ensure that it is made very clear to the Russian side that this kind of behavior is unacceptable," he said. "This is a Cold War by other means."

Crimea has drawn frequent comparison with South Ossetia and Abkhazia. Even though the parallels between the two are far from simple, decision-makers could still learn from looking at Russia's behavior in Georgia. (08.03.2014)

Klaus Mommsen on the geopolitical importance of Crimea