The Russian parliament has said it will support the inclusion of Crimea into the Russian Federation. The announcement came a day after Crimean lawmakers voted to hold a referendum in a move to break away from Ukraine. 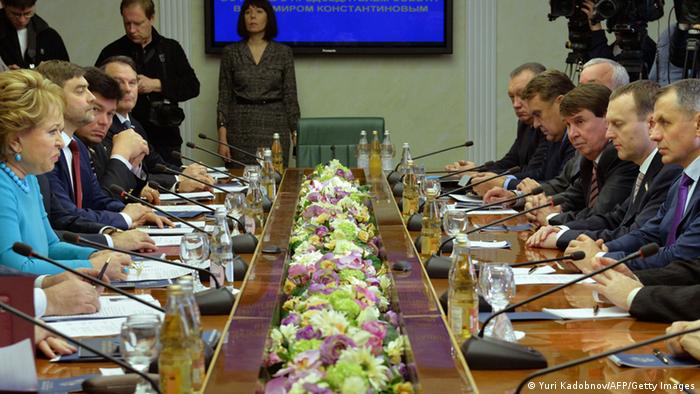 Both the upper and lower houses of parliament signaled on Friday that they would welcome the will of voters in Crimea to join the Russian Federation. Lawmakers in the Black Sea peninsula, which has a majority Russian-speaking population, have scheduled a referendum for March 16 to determine the region's allegiance.

"We support the free and democratic choice of the population of Crimea," the speaker of the lower house – the Duma - Sergei Naryshkin said at a meeting with a Crimean delegation in Moscow on Friday.

"We will respect the historic choice of the people of Crimea," Naryshkin added.

The speaker of the upper house - the Federation Council - echoed this sentiment, also dismissing international charges that the vote for a referendum had occurred illegally.

"The decision [by the Crimean parliament] is fully in line with international practice," Federation Council speaker Valentina Matviyenko (pictured left) said. "If the people of Crimea take a decision to join Russia then the Federation Council will undoubtedly support that decision."

She also pointed to the current political situation in Scotland, where voters will go to the polls on September 18 to determine whether the country will become its own sovereign nation or remain a part of the United Kingdom.

"It's complete nonsense, it absolutely does not reflect our intentions, the feelings of empathy and the pain we feel for the Ukrainian people," Matviyenko said.

The pro-Russian regional parliament in Crimea announced the referendum on Thursday, prompting dismay from Western allies and Ukraine who already blame Russia for heightening tensions in Ukraine with the deployment of troops to Crimea last week.

Commenting on the move, German Chancellor Angela Merkel said in Brussels on Thursday that the proposed vote was a "referendum based on a foundation that does not even exist."

Amid the Western backlash for the recent political developments in Crimea, Russian President Vladimir Putin continued his litany of reasons for standing against the interim government in Kyiv, which came to power in late February after ousting President Viktor Yanukovych.

"Regardless of all the efforts of our president, his readiness to explain Russia's position practically on a daily basis, we still hit a wall of no understanding," Putin's spokesperson Dmitry Peskov told state television Rossiya 24 on Friday.

"It is rather sad and what is worse is that it is very bad from the point of view of possible repercussions," Peskov added.

The Russian president has maintained throughout the diplomatic crisis that he cannot ignore calls for protections from ethnic Russians and other Russian supporters in Ukraine who face persecution from the pro-EU transitional government in Kyiv. However, members of the UN Security Council have dismissed these claims as unfounded, citing a lack of evidence for any mistreatment of that segment of the population in Ukraine or Crimea.

Continued Russian activities on the Crimean peninsula prompted the EU and the US to levy sanctions Moscow, including a suspension of a EU-visa negotiations and travel bans, respectively.

German Foreign Minister Frank Walter-Steinmeier, who has played a prominent role in negotiations in Ukraine, warned Russia against annexing Crimea.

"Russia has added fuel to the flames with its decision to promote the [Crimean] referendum and the introduction of a law in the lower house, according to which Russia will be ready to take on a new member into the Federation," Steinmeier said on Friday, adding that not just the EU, but the world community in general would "vehemently" condemn it.

The German foreign minister added that Putin was still being held accountable for his earlier statement that there was "no intention to annex [Crimea]."