In 2013, hundreds of thousands of Ukrainians took to the streets demanding an independent judiciary and an end to corruption. Since then, some progress has been made, but activists say much more work lies ahead. 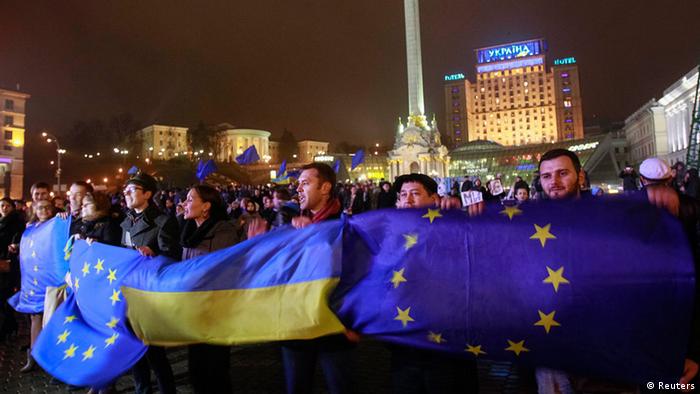 Mykhailo Zhernakov will always remember the tumultuous days of November 2013. Like many other pro-European Ukrainians, he had eagerly awaited the signing of the Ukraine–European Union Association Agreement, after years of negotiations between both sides. But on November 21, 2013, Ukraine's pro-Russian president, Viktor Yanukovych, announced he would not sign the treaty. When a pro-European rally one week later was brutally suppressed on Kyiv's Independence Square, Zhernakov, like many others, took to the street to protest.

At the time, the then-28-year-old was working as a judge for a regional administrative court and had a bright future ahead of him. But he soon realized that he was part of the very system he opposed. "I was lucky to work with a relatively young team and quickly saw how corrupt and politically biased Ukrainian courts really are," he told DW.

A few weeks after Yanukovych and his corrupt clique fled to Russia in February 2014, Ukraine's successor government signed the Ukraine–EU agreement. The government's former pro-Russian apparatchiks were largely replaced with young, Western-oriented ministers, and the leadership swiftly implemented a range of reforms. With bankruptcy looming, legal loopholes that had allowed previous leaders to siphon state funds into their own pockets were closed. Economists at Kyiv's Institute for Economic Research and Policy Consulting (IER) have calculated that reforms demanded by international lenders and enacted in 2014 have saved the Ukrainian state some $6 billion (€5.3 billion) annually.
"Before, state money was regularly embezzled," said IER economist Oleksandra Betliy.

Ukrainian oligarchs, for instance, abused their control over large state-run power companies to pocket some of the revenue.

Less than two years later, however, this reform zeal waned. In early 2016, the young economy minster, Aivaras Abromavicius, who had focused on wresting state-run enterprises from the control of Ukrainian oligarchs and leading politicians, resigned. Abromavicius cited pressure from President Poroshenko and his allies as the reason.

Judge Zhernakov, too, soon became disillusioned with the direction his country was going. He regularly traveled to Kyiv to give advice on judicial reform. One of his biggest concerns was to help isolate the country's legal branch from the influence of politicians. But, to his disappointment, he soon had to accept that the country's leaders preferred the old way of doing things.

In late 2015, Zhernakov quit his job in protest against the political subversion of the judiciary. While activists and a new generation of politicians had, with help from the EU, managed to reform how judges self-govern their profession, little changed in practice.

"Judges still depend on those in power. Bodies for the self-government of the profession are now abused to punish judges who oppose the powerful," Zhernakov said. He believes judicial reform failed because old Kyiv elites refused to have their power curtailed, and because older judges were unwilling to fight for the independence of the judiciary.

Zhernakov nevertheless vowed to keep fighting. He founded a nongovernmental organization that, with international backing, aims to deliver radical change in the long term. "Changes need to be felt early on, namely during the training of young lawyers," he said.

Daryna Kalenyuk of the Ukrainian Anti Corruption Action Center has also lost faith in the country's leadership. She says that it deceives international lenders like the World Bank, the International Monetary Fund and the EU by pretending to carry out reforms. "We need to expose these lies and make our international partners understand this is happening," said Kalenyuk. Her NGO and that of Zhernakov is receiving financial support from governments and foundations in various EU countries.

Kalenyuk and Zhernakov represent a new generation of Ukrainian reformers who have become increasingly professional about what they do. They are well connected in the world, and European leaders visiting their country and meeting Ukrainian politicians often also meet these young anti-corruption activists. Progress, despite the setbacks

Five years have passed since the 2013 Euromaidan protests, and Ukraine is a radically different country today. While the reform process has slowed, much progress has been made nevertheless. For instance, Ukrainians today no longer require a visa to travel to the EU. Since 2017, almost 1.5 million have made use of this new freedom.

In 2015, the National Anti-corruption Bureau of Ukraine (NABU) was created, for which President Poroshenko was widely praised. But NGOs have warned that the independent anti-corruption body has been repeatedly prevented from doing its work by Ukraine's public prosecutor — who happens to be an ally of Poroshenko.

Anti-corruption court to be set up

NABU has shown dozens of influential politicians to be corrupt, including several of Poroshenko's allies. But so far, not one of them has been tried. The old generation of judges tend to wait years before initiating court cases against corrupt politicians. Often, lenient rulings in favor of the corrupt are the result.

That is why a coalition of NGOs has been fighting for years to establish an independent anti-corruption court. Activist insist judges should be selected by a renowned international commission of legal experts in a fully transparent process. Poroshenko has finally, though begrudgingly, agreed to such a court. Zhernakov said he was pleased by that decision, and is convinced that international pressure had a lot to do with it.