Following days of protests in the Moldovan capital Chisinau, a new alliance between opposition parties has formed. It is calling for recent election results to be honored and for an independent judiciary. 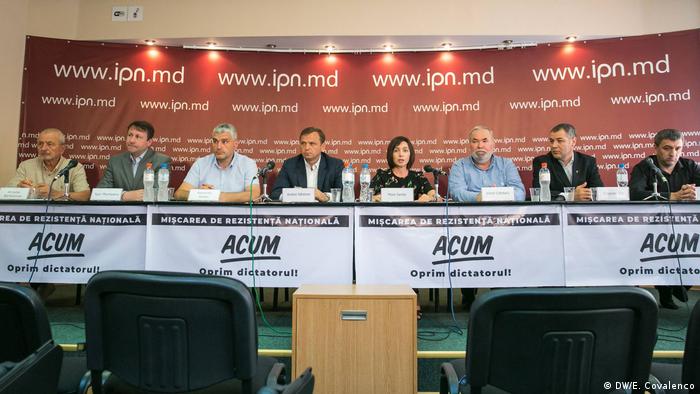 The new alliance between opposition parties emerged not with a plea for power but with a common aim to fight corruption, manipulations of justice and the dense network of oligarchs in the non-EU state.

The new front of resistance front was launched by the two pro-European opposition politicians, Andrei Nastase, the head of the Dignity and Truth (DA) platform, and Maia Sandu, the leader of the Action and Solidarity Party (PAS).  Leading civil representatives backed the new alliance.

The latest wave of new mass protests was triggered after a court annulled the results of a mayoral election held on June 3, 2018. Nastase had apparently won the runoff ballot against the socialist candidate Ion Ceban, but a court annulled the poll result for alleged irregularities. The country's Supreme Court then upheld the verdict, a decision which came as a surprise because international observers and even the losing candidate himself had described the result as correct.

The dubious reasoning of the court is that the winning party had carried out "unauthorized agitation" on election day. Nastase had called on Moldovans to vote in the election, without making a partisan recommendation, which is forbidden.

Many Moldovans see the verdict as a desperate attempt by the ruling Democratic Party (PDM) and its leader Vlad Plahotniuc, a mighty powerbroker and oligarch, not to lose political control of the country.

According to preliminary polls on the parliamentary elections set take place in the autumn, the PD will not enter power in parliament. The strongest forces are the Socialists (PSRM), led by pro-Russian President Igor Dodon, and Sandu's PAS.

The electorate of Moldova is split. Those opposed to the government claim there is a secret alliance between Plahotniuc and Dodon that conspires to discredit pro-European politicians via any means. Swathes of Moldovans, especially disenchanted young people, have left the country to seek work abroad and lead a normal life, turning their backs on their homeland.

Fearful of another Euromaidan

Nastase warns of a "Yanukovych scenario," a reference to the anti-government unrest that broke out in Ukraine five years ago, which became known as Euromaidan. A scenario that could also be implemented by Plahotniuc in Moldova, Nastase told DW. Such an outcome would be incompatible with democracy and unacceptable to the citizens of the landlocked country in Eastern Europe. "Our goal is to free the country from this stranglehold and to restore democracy and stability in our country," Nastase said.

His colleague Sandu sees the annulment of the free and fair local elections as concrete evidence of Plahotniuc's control of all state institutions - including the judiciary. In an interview with DW, the former World Bank consultant and former education minister said the situation in her country was critical. "We want to work together with all concerned to ensure democracy in Moldova," Sandu said.

EU responds to the unrest

Brussels has also responded to the current crisis in Chisinau, in a letter signed by the EU's foreign policy chief, Federica Mogherini, and Johannes Hahn, the EU's enlargement commissioner. The letter outlines the bloc's expectations for the sanctity of the democratic process and that all those responsible respect the outcome of the election, which has been "recognized by national and international observers and reflects the will of the electorate."

The reaction of the ruling PDM to recent developments has been rather cautious. Parliamentary leader Andrian Candu stated that one could not simply intervene in a judicial act, however, he wants to campaign for judicial reforms. Plahotniuc, warning of an escalation of the situation, spoke of a vague threat of "other, much bigger surprises." What the leader specifically meant by this remains his secret.

Meanwhile, the new opposition alliance has called for a further demonstration in the center of the capital on Sunday, July 1. Many Moldovans across the country are expected to attend.

In an exclusive DW interview, Moldova's president, Igor Dodon, tried to downplay his reputation as a pro-Russian leader, arguing that his country shouldn't side with either Russia or the West. (26.02.2018)

The EU has invited representatives from six post-Soviet states to take part in its fifth annual Eastern Partnership summit. On the agenda: reforms and closer economic ties. Bernd Riegert reports from Brussels. (24.11.2017)

Moldovan President Igor Dodon has had his powers suspended for refusing to appoint seven ministerial nominees in late December. The pro-Russian president has repeatedly clashed with Moldova's pro-European government. (02.01.2018)