Ukraine's Yulia Tymoshenko to run in next year's presidential election

The two-time ex-prime minister, who spent three years in jail for corruption, says she will run against Petro Poroshenko. Although she enjoys undying support in some quarters, many voters see her as part of the problem. 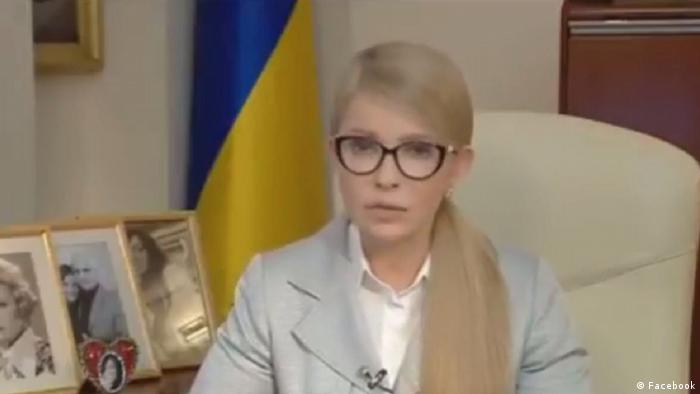 Ukrainian opposition leader and political veteran Yulia Tymoshenko confirmed on Wednesday that she would seek to challenge Petro Poroshenko in the country's presidential elections due next year.

"I will run for the presidency of Ukraine," she said during a question-and-answer video posted on her official Facebook page.

She said it wasn't her intention to "play an authoritarian game ... the presidential office for me is not a PlayStation."

Tymoshenko is possibly Ukraine's most influential woman and is the leader of the All-Ukrainian Union "Fatherland" party, which has 19 seats in parliament.

The 57-year-old was twice the country's prime minister — the first time was for less than eight months in 2005 following the country's Orange Revolution, which saw the country's post-Soviet establishment overthrown.

She returned to the position from 2007-2010, before losing the presidential election to Viktor Yanukovich, who aligned the country towards Russia.

Following her defeat, the pro-European Tymoshenko was convicted of embezzlement and abuse of power and sentenced to seven years in prison, of which she served three. The case was denounced as selective justice by the West.

She was freed following the toppling of Yanukovich's government by a pro-Western uprising in February 2014 and re-elected to parliament.

Read more: The mysterious case of Babchenko's staged murder, one week on

During the 2014 presidential election, she came second to Poroshenko with nearly 13 percent of the vote.

Tymoshenko led an opinion poll conducted in May by the Ilko Kucheriv Democratic Initiatives Foundation and the Kiev-based Razumkov think-tank, with support among likely voters of 13 percent.

But her candidature could be brought to an abrupt halt by an investigation into whether she took cash from Moammar Gadhafi's regime in Libya to fund her 2010 election campaign.

Kadhafi met Tymoshenko during a visit to Ukraine in 2008. He was killed in Libya in October 2011 by rebels.

Dozens of far-right activists have been arrested following scuffles before a gay pride march in the Ukrainian capital, Kyiv. Some 5,000 police and soldiers were deployed after organizers received threats. (17.06.2018)

Former Ukrainian Prime Minister Tymoshenko has said she plans to run for president. The former opposition leader was freed from jail last month following the ouster of President Viktor Yanukovych. (27.03.2014)

Germany's Heiko Maas has hosted the foreign ministers from Russia and Ukraine, as talks aimed at resolving the Ukraine conflict resumed for the first time in 16 months. Maas has warned that talks will be "tough." (11.06.2018)