Vladimir Putin has spoken with Petro Poroshenko about a possible prisoner swap. Several Ukrainian prisoners in Russia are on a hunger strike, including film director Oleg Sentsov, who is serving a 20-year sentence. 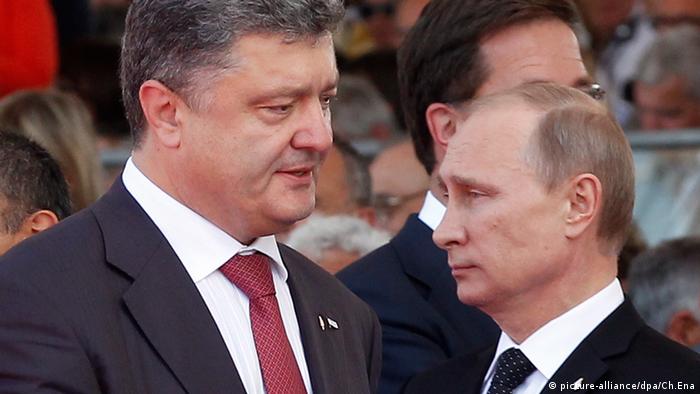 The Kremlin said the call was initiated by Ukraine and that "special attention was paid to humanitarian issues, including an exchange of people being held" by the two sides.

Both Moscow and Kyiv said the two leaders agreed that a rights ombudsmen would visit the prisoners in the respective countries "in the near future."

Tensions between the two countries have been high since Russia annexed the Crimean peninsula in 2014 and supported pro-Russian separatists in the region.

The announcement comes five days before the start of soccer's World Cup hosted this year by Russia.

Ukraine says that at least 64 Ukrainians are "political prisoners" in Russia, including 40 who are being held in Crimea. Poroshenko had placed particular emphasis on Ukrainian citizens that were on a hunger strike, saying they should be released "as soon as possible."

"The head of the Ukrainian state drew attention to Ukrainians' hunger strikes and expressed concern over their deteriorating health," his office said in a statement.

One of the hunger strikers is Oleg Sentsov, a Ukrainian film director who began his hunger strike on May 14 and demanded that all Ukrainian political prisoners be released from Russian jails. Sentsov was handed a 20-year jail sentence in 2015 on terrorism charges after helping Ukrainian soldiers escape from the Crimea in 2015.

Ukrainian activist Oleksandr Kolchenko, who is serving a 10-year sentence after being arrested along with Sentsov, is also on a hunger strike.

Putin similarly stressed that Russian journalists arrested in Ukraine should be released immediately.

Should world leaders go to the football World Cup in Russia? This has become a tricky question for politicians in several countries. Unusually, Germany's famous fan Angela Merkel has not yet said whether she will attend. (08.06.2018)

The mysterious case of Babchenko's staged murder, one week on

Kyiv says it prevented the assassination of Russian journalist Arkady Babchenko – by staging his death. How credible is this claim? One week has passed since news broke Babchenko is in fact alive. Many questions remain. (08.06.2018)

Ukrainian filmmaker Oleg Sentsov has been jailed for four years in Russia and is currently on hunger strike. His cousin told DW she is worried about his health and hopes German Chancellor Angela Merkel can help free him. (06.06.2018)