A Ukrainian filmmaker has gone on trial on terror charges in Russia. Rights groups say the case against Oleg Sentsov was fabricated as payback for his vocal opposition to the annexation of Crimea. 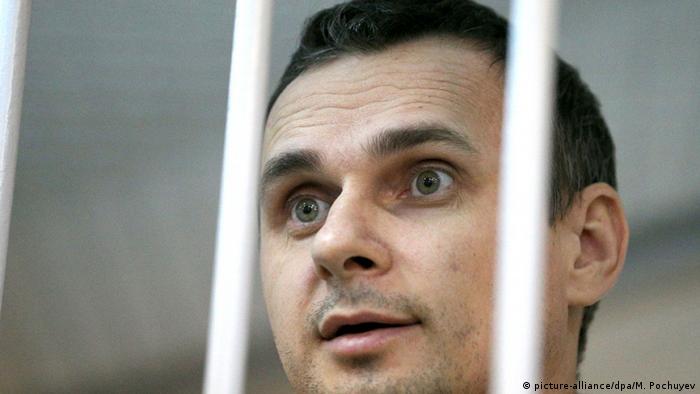 Ukrainian filmmaker Oleg Sentsov pleaded not guilty to charges of conspiracy to commit terrorism in a military court in the southern Russian city of Rostov-on-Don on Tuesday.

"I don't consider this court a court at all, so you can consider whatever you want," Sentsov said during the hearing.

The 39-year-old was arrested in Crimea by Russia's FSB security service in May 2014, two months after the Black Sea peninsula was annexed by Russia. He is accused of collaborating with the right-wing Ukrainian group Right Sector to carry out attacks on pro-Moscow organizations. If found guilty, Sentsov could face up to 20 years in jail.

Sentsov, who directed the film "Gamer," has been in jail for more than a year. His defense team describes the arrest as a kidnapping, and the case against the Crimean native as revenge for his pro-Ukrainian views.

A lawyer for the director told news agency AFP on Tuesday that he didn't hold much hope his client would get a fair trial, saying the best-case scenario would likely be for Sentsov to be sent back to Ukraine as part of a prisoner swap deal.

"I think the result will be negative. No one will acquit anyone, no one will change any charges," lawyer Dmitry Dinze said. "We hope that when all the procedures are done, Sentsov will be exchanged for some other people in Ukraine who are important to Russia."

Also on trial facing terror charges with Sentsov is anti-fascist activist Alexander Kolchenko. Two other alleged co-conspirators have already been found guilty of participating in the Right Sector and sentenced to seven years in jail.

World renowned filmmakers, including Pedro Almodovar and Ken Loach, have also condemned Sentsov's detention in an open letter to Putin.

The 71st Venice International Film Festival has begun with a screening of "Birdman." At the festival, two seats will be left symbolically empty in tribute to imprisoned directors from Iran and Ukraine. (27.08.2014)