Jailed in Russia, filmmaker Oleg Sentsov looks to Germany′s Angela Merkel for help | Europe | News and current affairs from around the continent | DW | 06.06.2018

Ukrainian filmmaker Oleg Sentsov has been jailed for four years in Russia and is currently on hunger strike. His cousin told DW she is worried about his health and hopes German Chancellor Angela Merkel can help free him.

"He doesn't eat; he only drinks warm water. He is injected with glucose and vitamin B to keep him healthy. Four years in the prison camp have really damaged his health." That is how journalist Natalia Kaplan described to DW's Russian-language service the condition of her cousin, Ukrainian filmmaker Oleg Sentsov, who is imprisoned in Russia.

On May 14, Sentsov went on indefinite hunger strike, demanding that all Ukrainian political prisoners be freed from Russian jails. He said he would hold out "until the victorious end." His cousin Kaplan was taken by surprise. "Apparently, he didn't see any other solution," she said.

Read more: Arkady Babchenko: The man who came back from the dead

Sentsov is currently being held in a Russian prison camp above the Arctic Circle, in the town of Labytnangi, Kaplan said. She explained how Sentsov, who hails from Crimea, is struggling with the harsh climate. Even before his hunger strike, he was losing hair and his teeth were deteriorating, according to a letter he sent her. And, said Kaplan, Sentsov has had heart and joint problems since childhood. 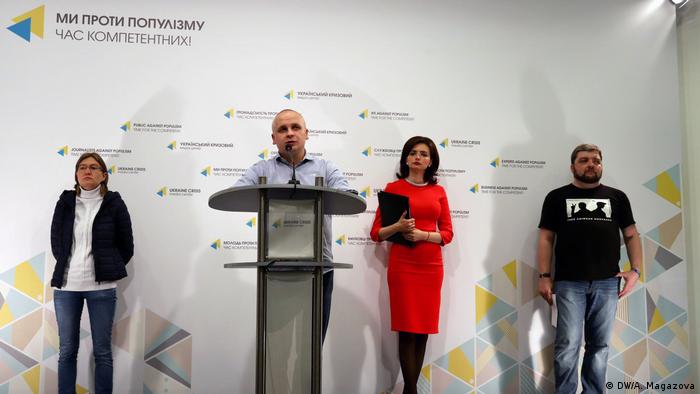 Kaplan (left) has called for her cousin's release

In 2015, a Russian military tribunal sentenced Sentsov to 20 years in prison for allegedly participating in a "terrorist conspiracy" in Crimea. The sentence came after he had participated in peaceful protests against Russia's 2014 annexation of the peninsula.

But why did Russia's secret service target Sentsov? Because he helped Ukrainian military personnel escape from a Crimea army barracks that had been surrounded by Russian soldiers, Kaplan said. Once a safe corridor was established, "he found a bus and organized their escape," she told DW's Zhanna Nemtsova. When, in April 2014, Russia began its "anti-terror campaign" on Crimea, quick results were needed, Kaplan explained. By May of that year, Russian authorities uncovered a "terrorist organization" and "Oleg was named its mastermind because he has leadership skills and organizational talent," she said. "When he was tortured, he refused to reveal anything about himself or others." 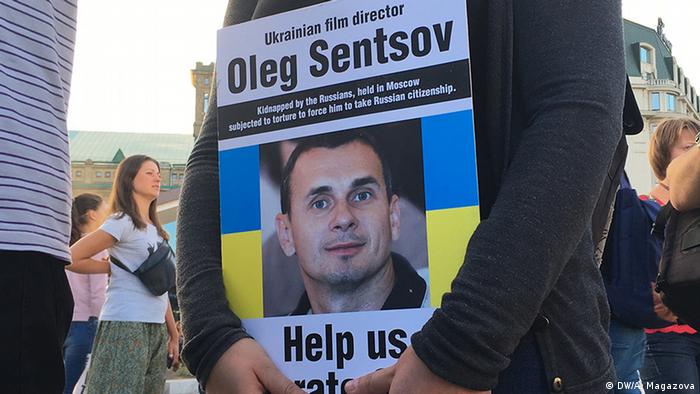 For more than four years now, Kaplan has been fighting for her cousin's release. She is hopeful that leading politicians will support her cause. French President Emmanuel Macron "already got involved but unfortunately it did not help," she said. Kaplan believes it would be productive if US President Donald Trump picked up the phone and called his Russian counterpart, Vladimir Putin.

But she is pinning most of her hopes on German Chancellor Angela Merkel. "We hope Germany, and especially Angela Merkel, could help," Kaplan said. "She has close ties to Putin and could act as a mediator, helping to get momentum into the affair."

She implied that Putin personally dislikes Sentsov because he was the only political prisoner to directly attack the Russian president in court. "I do not recall anyone, ever, with so much media present, calling Putin a 'bloody dwarf,'" Kaplan said. "So yes, maybe Putin has a personal feud with him; I mean what good is he to Russia now?" She believes Sentsov was initially used by Russia to justify the Crimea annexation and to demonstrate the activity of alleged "terrorist organizations" on the peninsula.

If Kaplan were ever to have the opportunity to meet with Putin directly, she said she would tell him: "Think about it logically. Oleg could die. What would that lead to? A new round of sanctions. Believe me! There will be uproar. Maybe the football World Cup will be called off. Either way, we would do everything to prevent other Russian sports and entertainment events."

Kaplan stressed that ultimately Sentsov's future is in Putin's hands. "Either he releases the prisoners and shows some humanity, or he suffers the negative consequences," she said.