The mysterious case of Babchenko′s staged murder, one week on | Europe | News and current affairs from around the continent | DW | 08.06.2018

The mysterious case of Babchenko's staged murder, one week on

Kyiv says it prevented the assassination of Russian journalist Arkady Babchenko – by staging his death. How credible is this claim? One week has passed since news broke Babchenko is in fact alive. Many questions remain. 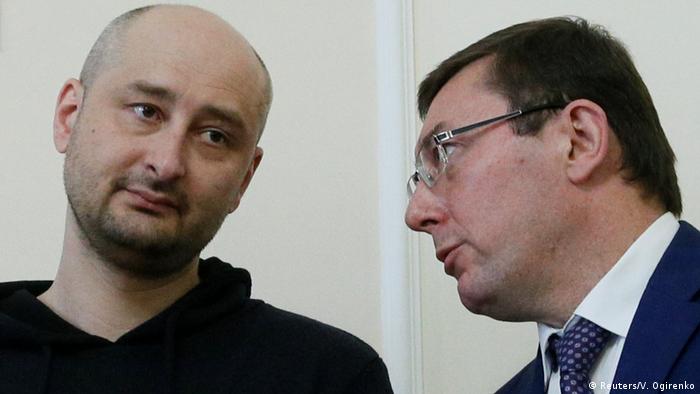 One day after Russian journalist Arkady Babchenko's staged death, Ukraine's prosecutor general, Yuriy Lutsenko, claimed his country's secrete service, the SBU, had a Russian hit list with the names of 47 Ukrainian journalists, bloggers and literary figures. Which, after apparently being leaked by an SBU employee, was published on news platform "strana.ua" on June 5.

The country's authorities have so far been mum as to its authenticity. Ukraine's secret service, meanwhile, has begun investigating the leak.

On the day Ukraine announced it was in possession of said Russian hit list, the country's secrete service invited all those named in it for a meeting. Only 17 out of 47 showed up. They are considered witnesses and have signed confidentiality agreements. Some journalists, including several on the alleged hit list, however doubt its authenticity. They think it is an arbitrary and illogical list of names.

One suspect in court

Ukrainian businessman Boris Herman is the only suspect who has been arrested in connection with the Babchenko case. Herman, a minority shareholder in German-Ukrainian arms manufacturer Schmeisser, is suspected of having planned Babchenko's actual murder at the behest of Russia. Yet his lawyer Jewhen Solodko told DW that during the trial there was never any mention of a Russian hit list with 47 names. On May 31, a Kyiv court ordered a two-month jail sentence for Herman. 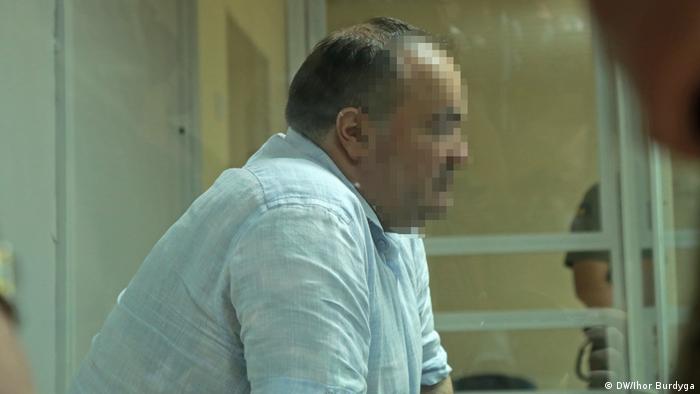 Boris Herman is one of the suspects in the Babchenko case

During the trial, Herman presented his version of events, claiming that he is a secret agent working for Ukraine's counter-intelligence unit, which belongs to the SBU. "I was tasked with finding out what influence Russian money could have on potentially destabilizing Ukraine and bringing about regime change."

Herman says he was contacted last year by his long-term acquaintance Vjacheslaw Pivovarnik, who is a former Ukrainian citizen who has relocated to Moscow. There, according to Herman, Pivovarnik works for a foundation associated with Russian President Vladimir Putin which focuses on Ukrainian affairs. Herman claims he informed Ukraine's counter-intelligence unit about his meetings with Pivovarnik and was then permitted to continue to collect information about Russian interference in Ukraine.

Ukrainian military prosecutor Ruslan Kravchenko, who is in charge of the trial, told DW he cannot confirm Herman's claims.

Herman also claims he hired Oleksiy Zymbalyuk, a former monk, to assassinate Babchenko, a fact Ukrainian counter-intelligence was well aware of, he says. Herman argues it was clear that Babchenko's murder was only going to be staged. "But we kept everything secret because we knew SBU is teeming with Russian double agents," Herman claims.

The SBU, in turn, says Zymbalyuk volunteered to fight on the Ukrainian side against pro-Russian separatists in the Donbass region. And that Zymbalyuk contacted Ukrainian authorities after Herman hired him to kill Babchenko. The secrete service then convinced Zymbalyuk to cooperate and conduct an "undercover investigation."

The SBU says when Zymbalyuk received $14,000 (€12,000) from Herman as a first instalment for Babchenko's assassination plus an extra $1,000 (€850) to buy weapons, Zymbalyuk went ahead and faked Babchenko's murder.

Herman says he then received a Russian hit list with the names of 30 Ukrainian journalists and public figures through a contact at the Moscow foundation. Herman claims he handed the list over to Ukrainian counter-intelligence, which the SBU denies, saying Herman in fact forwarded the list to Zymbalyuk. Soon after that, Boris Herman was arrested.

Little is known about Vyacheslaw Pivovarnik, who is said to work for the Moscow foundation and who supposedly ordered Babchenko's killing. Documents show he established a Kyiv-based consulting firm with Herman. Files show Pivovarnik is registered as the manager or co-founder of at least five other Ukrainian companies. According to his LinkedIn profile, Pivovarnik worked for an "Institute for Geopolitical And Economic Research" between 2010 and 2012.

Inside Europe: Taking stock of the situation in Ukraine

Facebook states that Aleksandr Skripalskiy, who served as the SBU deputy director between 1997 and 1998 as well as in 2007, heads the institute. He was also at the helm of the Ukrainian Defense Ministry's military intelligence department between 1992 and 1997. Skripalskiy told Radio Liberty his institute occasionally runs seminars and publishes articles in the media, but is currently inactive due to lack of funding.

He says he has no recollection of Pivovarnik ever working at the institute. DW tried unsuccessfully to contact Pivovarnik via social media.

'Killing' of Babchenko: A big show raises lots of questions

It had all the makings of a Hollywood story in Ukraine. Well-known Russian war correspondent Arkady Babchenko was declared dead in Kyiv and then appeared on TV very much alive. Will the incident erode trust in Ukraine? (30.05.2018)

Ukraine's secret service faked journalist Arkady Babchenko's killing ― to foil an actual murder plot against him. The country's government must now reveal what it knows to restore its credibility, says DW's Bernd Johann. (31.05.2018)

The search for dead Russian mercenaries in Syria

For two weeks now, families of the Russian mercenaries killed in Syria have been waiting for their loved ones' remains to be brought back to Russia. Where are the bodies and why are relatives keeping quiet? (21.02.2018)