Ukraine: The forgotten victims of Donbass | Europe | News and current affairs from around the continent | DW | 16.02.2018

Ukraine: The forgotten victims of Donbass

Wives and mothers are fighting for the return of soldiers who went missing in the conflict between the Ukrainian military and separatists in the Donbass. Florian Neuhof reports on their desperate search for answers. 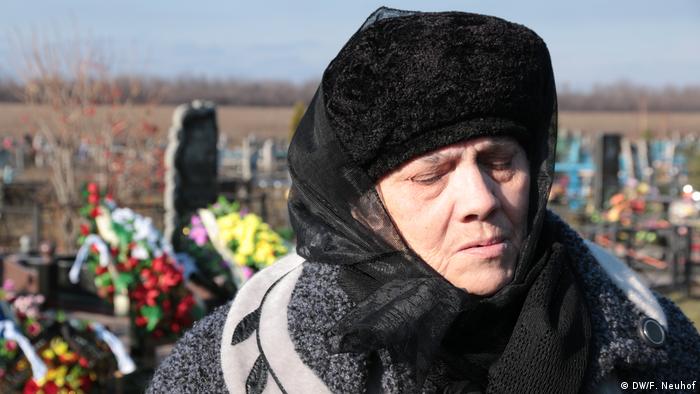 The clouds rippled low across the winter sky as Lubov Konopatska led a procession of mourners to the coffin of her son Serhiy. An old lady with a shaky gait, she wore a thick grey coat to protect her from the chill, a black cloth draped over her hat, and grief on her face.

Her son's coffin was propped up on wooden legs, and flanked by a quartet of soldiers. It stood on a stretch of gravel next to the graveyard on the edge of Shyroka Dacha, an ugly, decaying town somewhere on the vast expanses of the Ukrainian steppe.

Serhiy was killed in the fierce fighting in the summer of 2014, when the Ukrainian army and Russian-backed separatists clashed in the east of the country.

After pro-Russian President Viktor Yanukovych was ousted by the Maidan protests in Kyiv in 2014, ethnic Russians in the Donbass region rose in revolt. The Ukrainian army was sent in to crush the separatists, but Russia poured men and military hardware across its borders, and the Ukrainian advance was soon brought to a halt. The conflict simmers on as a stalemate that occasionally splutters into deadly skirmishes.

Serhiy's unit had been badly mauled in the town of Ilovaisk, where separatists ambushed retreating Ukrainian troops after promising them safe passage. The day before the ambush, Lubov had spoken to her son on the phone one last time before her calls went unanswered.

Searching for their sons

The army could not tell Lubov what had happened to Serhiy, so she got in touch with comrades who had survived the battle, and volunteer groups looking for missing soldiers. She was told that Serhiy had been wounded and brought to the in hospital in the city of Kryvyy Rih. He had been captured by the separatists, others said. 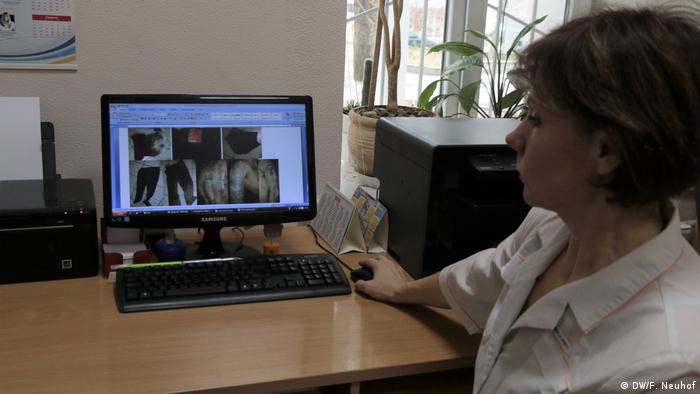 A grisly business: The corpses of fallen Ukrainian soldiers are often burnt or disfigured beyond recognition

She traveled to Kryvyy Rih, but could not find her son. Eventually, she went to the hospital in the city of Dnipro, where the bodies of soldiers killed in the Donbass region are brought to the morgue. The hospital officials dismissed hopes that Serhiy was still alive.

"They showed me pictures of very badly burned bodies lying in the morgue. They were all in a sitting position. I could see only bones and scalp, and didn't recognize my son," Lubov told DW.

The officials also handed her a charred mobile phone that they said was Serhiy's, and Lubov finally accepted that her son was dead when presented with DNA tests conducted at the Dnipro hospital.

In the confused fighting of 2014, soldiers often died in areas that remained in separatist hands. Ukrainian soldiers do not wear dog tags, making it difficult to identify badly burned corpses. Many of the men who fought during the height of the conflict were volunteers, who were not registered with the ministry of defense at the time.

Read more: Across the frontlines in Eastern Ukraine

Sitting in the living room of a modest flat in a crumbling apartment block in Kryvyy Rih, Victoriya Markina smiles as she turns the pages her wedding photo album, a reminder of happier times.

Her husband Andriy, a factory worker, was drafted in 2014 and sent to the Donbass, leaving Victoriya to take care of their two children. Like Serhiy, he went missing in Ilovaisk. During their last phone call on the eve of the retreat, Victoriya could hear the sounds of battle in the background.

"I felt like he was calling to say goodbye. I heard two other guys on the phone also trying to call their relatives. I told him not to say goodbye and said: 'The guys next to you have to make a promise to visit our house, when this is over.'"

After the phone went dead and the news of the disaster at Ilovaisk emerged, Victoriya despaired, believing her husband was dead. Then, a few days later, she saw captured Ukrainian soldiers in a report by a separatist TV station. One of them, she says, was Andriy. Victoriya threw herself into the search for her husband. 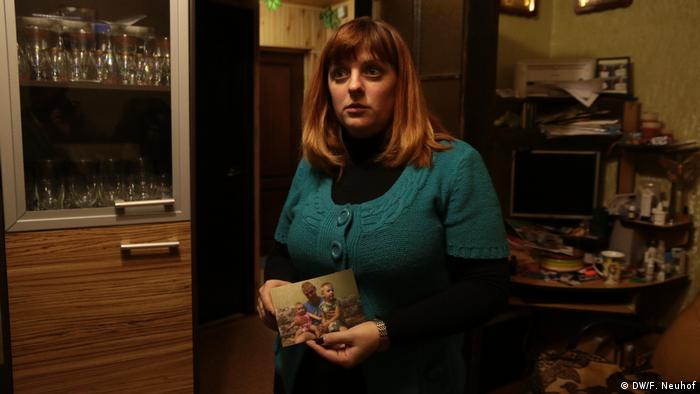 No help from the authorities

She got hold of the number of a separatist leader who had also featured in the TV report. He told her her husband had been taken to a village with other prisoners after the battle, but refused to help her. Then, one night, her phone rang. A man at the other end of the line told her to pay 10,000 hryvnia, around €300 ($375), or else Andriy would be sent back in pieces. Comrades of her husband told her it was a scam, and not to send any money.

Dealing with the Ukrainian authorities was little better. Victoriya was shocked by the lack of compassion she encountered when she visited the state security service in search for information on her husband's whereabouts. "One officer told me, 'There is a truck with dead bodies, go and pick one,'" she recalls.

Victoriya met other women who were searching for their men. They set up a Facebook group to organize protests and pressure government officials together, and call each other to give advice or comfort.

The camaraderie has given Victoriya the strength to continue her search. "I am going to believe to the end that my husband is alive," she says.

In a large reading room of a library in the port city of Odessa, Elena Suhak sits cradling a poster-sized picture of her son. After he disappeared in the Donbass in 2014, Elena relied on volunteers and bribes to separatist fighters to find out that the young soldier had been captured. Elena believes he might be used as forced labor in a coal mine in the city of Luhansk.

Elena vents her anger at those she holds responsible for the fate of her son.

"My main feeling is disappointment, because we trusted the government with our most precious thing, but the government is not doing everything it can to free our boys," she says.