Dozens of far-right activists have been arrested following scuffles before a gay pride march in the Ukrainian capital, Kyiv. Some 5,000 police and soldiers were deployed after organizers received threats. 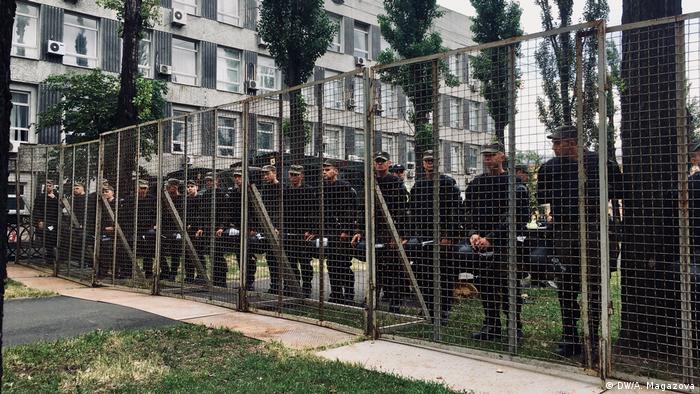 Fifty-six members of far-right groups were arrested on Sunday after they tried to disrupt a gay pride march in central Kyiv, police said.

Around 150 members of reactionary groups blocked the planned route of the march several times, and many of them threw gas canisters at riot police.

Five officers had to seek medical treatment after police moved in to clear the street.

Far-right group C14 said police had surrounded its protesters, attacking them with batons and tear gas. "Look at how they protect 'sexual minorities' and violate the rights of regular Kyiv citizens," it said in a post on Facebook.

A further confrontation took place near the city's Opera House, leading to several other arrests.

Thousands of police and army were deployed to guard the march by supporters of lesbian, gay, bisexual and transgender rights.

Some 5,000 people later took part in the 20-minute march, which took place without further incident amid a large security presence. 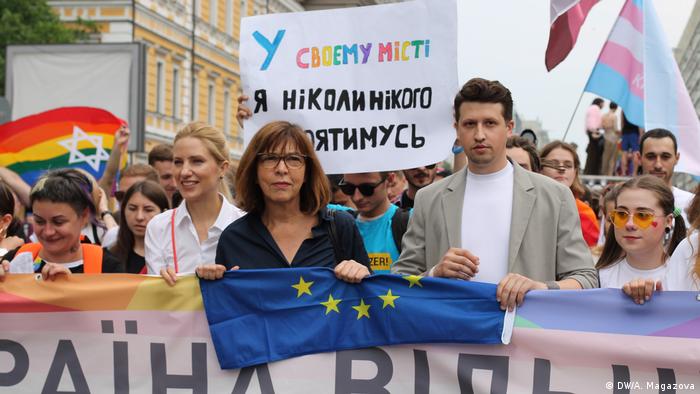 US ambassador Marie Yovanovitch and Rebecca Harms from the European Parliament were at the front of the crowd, which organizers said was roughly double the size of the previous year.

The two most recent gay pride marches in Kyiv have been largely peaceful, but the event in 2015 was disrupted by right-wing activists pelting participants with smoke grenades.

How safe is it for LGBT+ football fans to attend the World Cup in Russia?

As well as far-right activists, those who said they were defenders of "traditional family values" also protested against the march.

"They can do what they want, but we are against the propaganda, against implantation of this to our children," she complained.

The Ukrainian government has increased support for LGBT rights since a Western-backed leadership came to power in 2014, but critics say homophobic attitudes remain relatively widespread.

In many countries, civil society partners with the state. In Russia, it is the opponent. But there are groups that aren't giving up and in football, activists are standing up against homophobia. (03.06.2018)

German-born transgender pop singer Kim Petras is a rising star who has been compared to Lady Gaga and garners millions of YouTube views. She spoke to DW on the International Day Against Homophobia and Transphobia. (17.05.2018)

Some 2,500 people have taken part in the "March of Equality" in downtown Kyiv, with the authorities deploying thousands of security forces to ensure safety. A group of ultranationalists attempted to disrupt the event. (18.06.2017)