Ukraine LGBT community marches through Kyiv for gay pride parade | Europe | News and current affairs from around the continent | DW | 18.06.2017

Some 2,500 people have taken part in the "March of Equality" in downtown Kyiv, with the authorities deploying thousands of security forces to ensure safety. A group of ultranationalists attempted to disrupt the event. 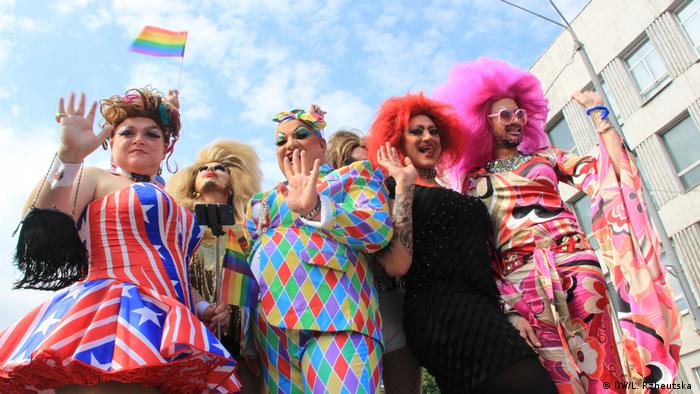 The participants walked through the center of Ukraine's capital, Kyiv, on Sunday, chanting slogans such as "We're different, we're equal!" and "Ukraine for all!"

"Finally in our country, we are able to come out for our rights and show that we exist," said one participant, Tetyana. "I feel nervous and happy that I can come out and not fear anything."

British Ambassador Judith Gough attended the event, which she said was held in a "fine party atmosphere."

Authorities cordoned off most of the area and deployed around 5,000 police officers to safeguard the parade, which has often been targeted by extremist groups in the past. Although no violence was reported at the Sunday event, the marchers were forced to change their route slightly as a group of around 100 ultranationalists attempted to block one of the streets.

Officials said they detained six protesters who tried to break through the police line.

"I'm convinced that this is wrong. It's a sin and it can destroy our country morally," said Irina, a student, who protested the event. 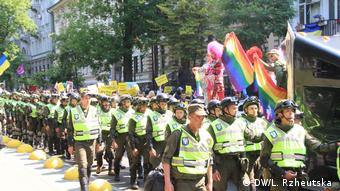 The day before the manifestation, ultranationalist group Right Sector had warned that their supporters would ensure the parade ended in a "bloodbath."

In 2014, Ukraine authorities canceled the LGBT march after police refused to ensure its safety. A year later, the gay pride event was organized outside of the city center, but lasted only several minutes before conservative protesters disrupted the event and clashed with the participants.

The first successful parade was held in 2016, with police out in force to protect about 1,500 participants.