Homophobia in Russia: ′I thought my daughter was a monster′ | Europe | News and current affairs from around the continent | DW | 10.10.2017

DW presents portraits of gay men and women in Russia, where homophobia is widespread. Our subjects tell their stories to DW's Moscow correspondent, Juri Rescheto.

"I think they should be banned from donating blood or sperm, and if they die in a car crash, their hearts should be burnt or buried in the ground as unsuitable for the continuation of life," was the message from Dmitry Kiselyov, a well-known Russian television journalist. It was directed at Russia's gay population, or those "with non-traditional sexual orientation," as some in the country refer to the LGBT community.

Kiselyov has been a prominent homophobic voice in Russian media, though he denies the accusation. His 2012 televised comments about banning gays and lesbians as organ donors were met by a round of applause from the audience.

Russian and international rights groups have criticized such public remarks as feeding a culture of homophobia in Russia. They can have deadly results: In 2013, Vladislav Tornovoi was found dead in the southern Russia city of Volgograd. The 23-year-old man had his head smashed in. He had been raped with beer bottles. A suspect told police he was killed for being gay.

Both the murder and Kiselyov's comments came amid the passing of a law banning "homosexual propaganda," especially in regard to minors. That includes a nationwide ban on events promoting gay rights and big fines for event organizers. Media outlets are obliged to carry age warnings on articles about homosexuality. 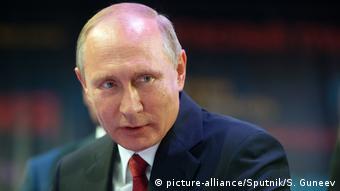 That was five years ago, and homophobia remains widespread today. Public statements against gays and lesbians can score political points, especially among conservative voters who don't see them as homophobic, but rather as upholding "traditional values" and "protecting children." Indeed, those were the words of President Vladimir Putin when he signed the "propaganda" bill into law.

When ordinary citizen Boris Konakov protested against the persecution of gays in Chechnya by chaining himself to a bridge in St. Petersburg named for the father of the current Chechen leader, Ramzan Kadyrov, lawmaker Vitaly Milonov lashed out. Milonov, a member of the Duma, Russia's parliament, called him "AIDS-infected," and suggested the bridge be washed with shampoo. The lawmaker was not reproached for his derogatory and inflammatory comments.

Elsewhere in Russia, a mother said she would "get on her knees and pray that God makes my daughter normal like everyone else." It was like being "in front of a monster," she said, when her daughter, Natalia, came out as a lesbian. Natalia's mother eventually came to terms with her daughter's sexuality, a benefit many young Russians do not enjoy. Human rights organizations have documented cases of "corrective rape," including families locking their lesbian daughters in a room with a rapist.

Russian media often rail against the cost of bread. However, little was said when Russian businessman German Sterligov posted a homophobic sign on his chain of bakeries. "Entry for 'pidarasam' forbidden," the placard read, using a vulgar Russian-language word for gays. It was part of Sterglilov's push to attract customers with homophobic messaging. Despite the sign banning his presence, gay rights blogger Kirill Egor went into one of the bakeries with his camera, finding many of the workers there to be welcoming.

Even less has been reported on the fate of more than 100 gay men who have been detained at an undisclosed location in Chechnya since the spring. Human Rights Watch has documented their mistreatment, torture and humiliation. German Chancellor Angela Merkel publicly criticized Vladimir Putin during a visit to Sochi, calling on his government to do more to ensure the safety of gays and lesbians in Russia. One man, who uses the pseudonym Viktor, described how he was told to leave Chechnya because of his sexual orientation.

Boris, Natalia, Kirill, Viktor: They shared their experiences from Moscow and St. Petersburg. Their stories are full of pain, desperation and courage – a small window into the perilous lives of thousands of gay men and women in Russia.

Gay in Russia: Viktor tells of persecution in Chechnya