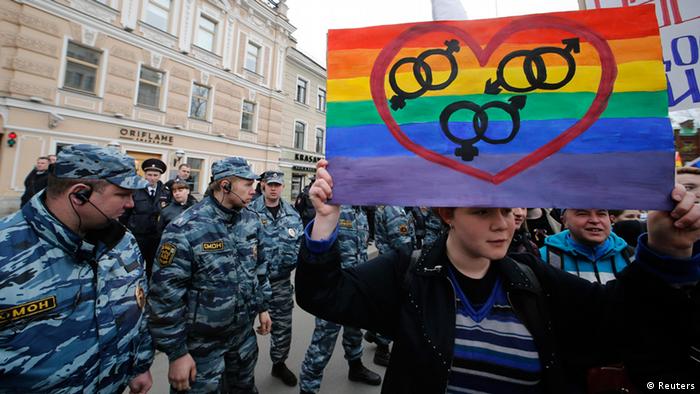 Three leading Russian gay rights activists brought their case before the court after they were fined for holding placards between 2009 and 2012 which encouraged the acceptance of homosexuality.

They claimed the law violated rights to freedom of expression and prohibition of discrimination under the European Convention of Human Rights. It effectively bans the dissemination in Russia of any materials depicting homosexuality as normal.

The Strasbourg court said in a statement that such laws "reinforced stigma and prejudice and encouraged homophobia," adding that "the very purpose of the laws as formulated and applied in the applicants' case had been discriminatory and, overall, served no legitimate public interest."

According to the court ruling, Russian lawmakers had "overstepped the margin of appreciation" of Article 10 of the convention, which guarantees freedom of expression.

The Kremlin said it plans to appeal the ruling.

"It's important to note that we're talking about (banning the promotion of homosexuality to) minors," Kremlin spokesman Dmitry Peskov. "Even when you ask a question it is very important to spell that out."

Nikolai Alexeyev, one of Russia's most prominent gay rights activists who brought the case before the European court, said the ruling was as "an enormous court victory for LGBT people in Russia," adding that it would give his advocacy group the scope to have the law scrapped altogether.

The activist is no stranger to contesting Russia's anti-gay laws before the Strasbourg court. After the Russian government banned a series of pride marches in the capital, Alexeyev took the case before the human rights court in 2010 and won. However, permission from cities for subsequent marches has nevertheless repeatedly been refused since.

Alexeyev and the two other applicants, Nikolai Bayev and Alexei Kiselyov, have staged several pickets promoting gay rights in Russia, with Alexeyev being detained numerous times. On one occasion, he claimed that Russian authorities had beaten him, breaking his finger. 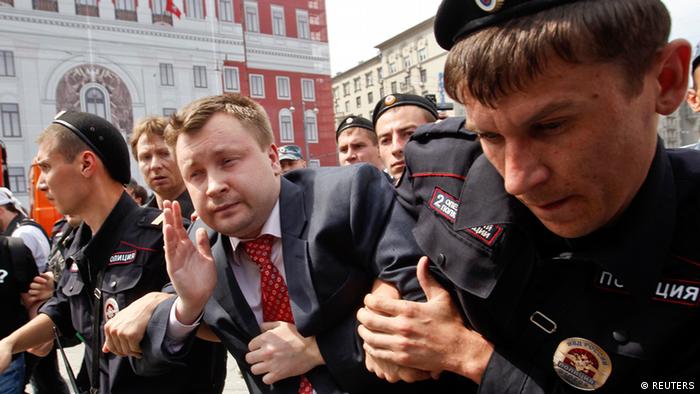 Gay rights activist Nikolai Alexeyev is detained and escorted away during a rally outside the Moscow mayor's office in 2013.

Following legislation that already been introduced in several regions, Russia adopted a federal law in 2013 prohibiting the dissemination to minors of supposed "propaganda" that legitimizes homosexuality. Rights campaigner decried the anti-gay laws, arguing that its loose wording meant even merely mentioning homosexuality in public could be deemed a criminal offense.

Russian lawmakers have defended the law, including President Vladimir Putin, citing the interest of children. Before court, lawyers representing the Russian government claimed "that regulating public debate on LGBT issues may be justified on the grounds of the protection of morals." The court rejected the claim.

The ECHR's rulings are in theory binding. However, Russia's contentious relationship with the court has seen it pass a law allowing its constitution to supersede the European Court.

In January, the constitutional court in Moscow overruled an ECHR ruling that ordered the Russian government to repay some 1.9 billion euros in compensation to shareholders of the now-defunct Yukos oil company.