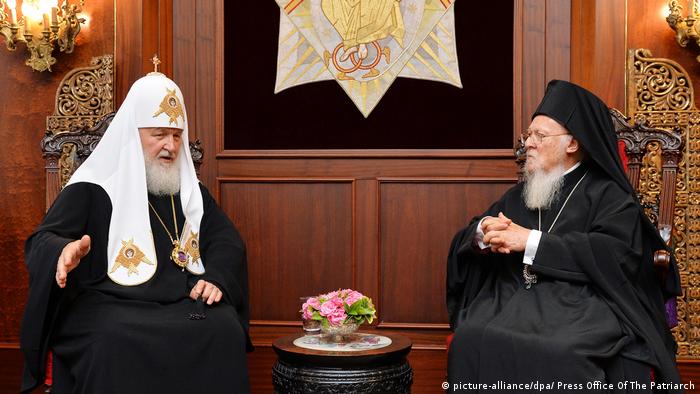 Ukraine's push for clerical independence from Russia is reaching its final stage. On August 31, Russian Patriarch Kirill personally traveled to Istanbul to visit the Patriarch of Constantinople Bartholomew, presumably to urge Bartholomew not to grant Kyiv's request.

Kirill claims authority over Orthodox believers in Ukraine. However, Orthodox Christians in that country are currently divided between a semi-autonomous branch loyal to Moscow and Kirill, and the one lead by the unrecognized Ukrainian Patriarch Filaret. The fighting in east Ukraine aggravated the dispute and prompted Kyiv lawmakers to enter the fray. Both the lawmakers and the President Petro Poroshenko have recently urged Patriarch Bartholomew of Constantinople to recognize the Kyiv branch.

To make things more complicated, Ukraine also has a third Orthodox Church, which cropped up in 1920s as a response to Soviet repression.

Who is in charge of believers in Ukraine?

Ukrainian officials hope that the patriarch of Constantinople would issue a "tomos of Autocephaly," granting the Kyiv-led church full clerical independence.

The patriarch of Constantinople is considered "first among equals" and wields traditional authority among his counterparts in other nations. He also bears the title of the "ecumenical" patriarch - meaning he represents a number of Christian churches.

Moreover, the Constantinople patriarchate boasts historical ties with Kyiv, according to German expert Johannes Oeldemann, the head of Ecumenical Institute Johann-Adam-Möhler in Paderborn.

Centuries ago, the Kyiv church was under authority of Constantinople, he told DW.

"The current dispute is about whether the church in Ukraine was definitely passed to Moscow's jurisdiction in the 17th century, or whether Constantinople is still in charge of Ukraine," Oeldemann said.

Unsurprisingly, the Moscow patriarchate believes its authority over Christians in Ukraine has been clearly established. Some of its religious figures have warned that a "tomos" from Constantinople might cause a split within the Orthodox world. However, the Moscow church leadership did not announce an official position on the issue.

The decision over Ukraine would influence long-running tensions between the two seats of religious power, Moscow and the present day Istanbul. While the Russian patriarch has less traditional authority than his colleague in Istanbul, he is also directly in charge of 150 million believers, or around one half of all Orthodox Christians in the world.

History offers an explanation for this rivalry, says Johannes Oeldemann.

"In the course of history, both of the patriarchates turned into somewhat imperialistic structures, depending either on the Russian or the Byzantine Empire, making them in charge not only of Greeks or Russians, but also other Orthodox believers living in their canonical area.

"This leads to tensions to this day, even as those two empires don't exist in the same form anymore," he told DW. "The churches still have ambitions to influence their territories, and there are some areas where they overlap, Ukraine being the biggest one of them."

The Constantinople patriarchate has already bumped heads with Moscow over Orthodox believers in other ex-Soviet countries like Estonia. Eventually, the two patriarchates settled on creating two parallel Orthodox hierarchies in the state.

Bartholomew wants to bridge the gap

Patriarch Bartholomew has so far proven to be very interested in church unity, according to Oeldemann, and made friendly gestures towards the Russian church. The Constantinople patriarch is also committed to building bridges with Christians outside of the Orthodox community.

"Specifically when it comes to the Roman Catholic Church, he has a close relationship with Pope Francis," says the German expert.

Still, Oeldemann says it would be tricky to negotiate an Estonian-like compromise in Ukraine, where three separate churches are vying for power.

"The question will be that – if you declare autocephaly on one church – which church will that be?" he told DW. "I don't believe any of them is a really worthy solution."

"Moscow will massively oppose making the Kyiv patriarchate autocephalous, because it is led by Patriarch Filaret, and he has been excommunicated by the Moscow Patriarchate."

On the other hand, setting up a new Ukrainian church and giving it authority would most likely just lead to new divisions, he said.

The decision on Ukrainian independence could come as early as September 2018, according to officials in Kyiv.