Protests in Ukraine have highlighted the division between the country's two main Orthodox churches. One has an independent streak and is protecting demonstrators from police. The other is subordinate to Moscow. 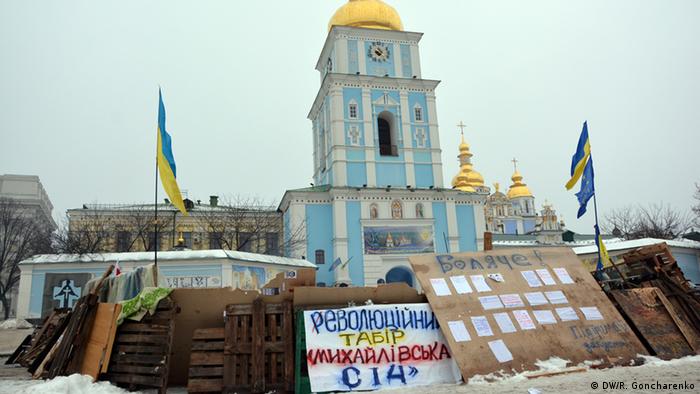 The colors of St. Michael's Monastery in Kyiv are those of the Ukrainian flag: light blue walls and golden domes. And, as people enter the building, they carry the blue and yellow flags in a steady stream.

"We have come to pray for students battered by the police," said Olena, a student from the western Ukrainian city of Lviv. She and her four friends traveled for three days to Kyiv to demonstrate for closer ties between Ukraine and the European Union - and against President Viktor Yanukovych, who recently put a stop to this process, triggering the mass protests. 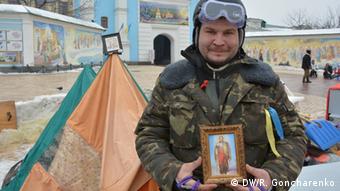 In the early hours of November 30, dramatic scenes played out before the monastery gates. A few hundred meters downhill, on the Maidan Nezalezhnosti (Independence Square), special police forces violently cleared a camp set up by opponents of the government. Hundreds of students were brutally beaten and chased into the surrounding streets. They found refuge at the monastery. Priests blocked the path of the baton-wielding police officers and did not let them through.

"There were moving scenes when, the next morning, priests quietly conducted their services so they wouldn't wake the students sleeping on the floor," Yuri Kurzilov said. The 32-year-old designer traveled to Kyiv from the southern Ukrainian city of Mykolaiv to support the protesters. "When I saw young students covered in blood, I decided, 'This government must resign,'" he said. "And when I saw how the priests helped protesters, I thought, 'The church is on the side of the people - and vice versa.'"

Symbol of the protest movement 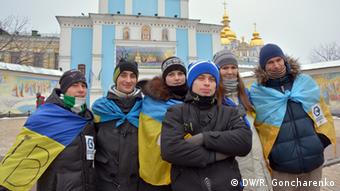 These students from Lviv are taking part in the Maidan protest

Today Yuri is standing together with half a dozen men in the square in front of St. Michael's Monastery. He wears a green camouflage jacket and has a helmet on his head. "This is how I protect myself from the police," he said. Here, a kind of sentry post has been improvised: a ten-meter-wide barricade of scrap wood and snow. "We watch to see if the police are coming, and then warn the people on the Maidan," Yuri said.

In recent days, the monastery has become one of the symbols of the protest movement. Early Wednesday morning (12.11.2013) the bells of the monastery rang out to warn protesters on the Maidan that police were again approaching. 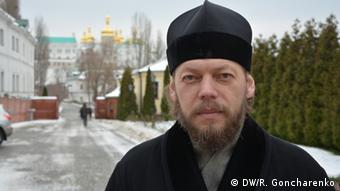 'Not under orders from Moscow': Kovalenko of the Russian-affiliated Ukrainian Orthodox Church

The monastery's opposition role does not appear to be a coincidence. It was destroyed during the Soviet era and rebuilt in the 1990s. It belongs to the Ukrainian Orthodox Church of the Kyiv Patriarchate. That church was founded after the independence of Ukraine and considers itself independent. But the Russian Orthodox Church has blocked it from gaining recognition as a part of the global Orthodoxy. The move was political, said Kyiv Patriarchate spokesman Archbishop Yevstratiy. "Russia wants to use the church to retain its influence over Ukraine."

Most believers in Ukraine belong to the Ukrainian Orthodox Church of the Moscow Patriarchate. It has its headquarters in the famous Kyiv Pechersk Lavra monastery on the steep right bank of the Dniper River. This church is subordinate to the Russian Patriarch. 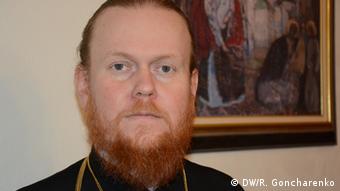 The two-decade-long division in Ukrainian Orthodoxy is reflected in the attitude toward the current events. Where the Kyiv Patriarchate granted demonstrators protection from the police, its priests praying alongside hundreds of thousands of protesters on the Maidan, the Moscow-oriented Patriarchate is behaving differently.

"Our priests may indeed go to the demonstrations, but only as citizens, and not as churchmen," spokesman Grigori Kovalenko told DW. He denied, however, that this was due to instructions from Russia. "There is no influence on us from Moscow," he said.

A few days ago, the two churches distributed a joint declaration. In it, they reaffirmed the right of citizens to take part in demonstrations, warned both sides against violence and called on them to pray. Previously, the Moscow-affiliated church had issued a separate statement addressed to the government and the president that warned of a division of the country.

Few expect the current protests to help bridge divisions between the churches in Ukraine. Or at least, that was the view of a group of students from Lviv who had come to St. Michael's Monastery to pray. "Russia will never recognize an independent Ukrainian Orthodoxy," said a man named Andriy.

Archbishop Yevstratiy of the Kyiv Patriarchate is more optimistic. If government opponents gain the upper hand, that would bring his church "several steps" closer to recognition by Moscow.

In Focus: Protests in Ukraine

Protests continue in Kyiv as the country becomes a center of geopolitical jockeying between the EU and Russia.

DW's Bernd Johann thinks that diplomatic efforts alone will not prevent more violence against the anti-government protest movement in Ukraine. (13.12.2013)

Surrounded by riot police, although more for their protection, supporters of Ukraine's President Viktor Yanukovych are also demonstrating in Kyiv. They say they also want Europe, but not just now. (13.12.2013)