Wanted in his native Georgia, Mikheil Saakashvili is engaged in a fierce political battle with Ukrainian President Petro Poroshenko. Saakashvili says he wants to "rescue" his adopted country from Kyiv's "bandits."

Former Georgian President Mikheil Saakashvili presents himself as an uncompromising reformer and crusader against corruption. Fluent in English and partly educated in the US, Saakashvili became a media darling by spearheading the bloodless ouster of Georgian President Eduard Shevardnadze, a former Soviet official, in 2003. And the reforms that Saakashvili put in place during his own tenure as Georgia's leader also earned him high praise.

Nevertheless, Saakashvili's critics accuse him of grandstanding and perpetuating the very crimes that he claims to fight. Now 50, he is facing several charges in multiple countries and controversies have stacked up over the course of his turbulent political career.

Saakashvili's high-profile conflict with Ukrainian President Petro Poroshenko escalated on Monday, when a group of masked men in military uniforms seized him from a Kyiv restaurant and deported him to Poland. Saakashvili pledged to continue his crusade against Poroshenko, whom he accuses of corruption.

Born in Tbilisi in December 1967, Saakashvili was a law student in Kyiv when the Soviet Union began its final dissolution in the early 1990s. During his studies, he became friends with Poroshenko.

Saakashvili then received a fellowship from the US's Columbia University, where he finished his master's program in 1995. He continued his studies in Strasbourg and Washington, DC.

An ally of Shevardnadze's at the time, Saakashvili entered politics in 1995, when he was elected to Georgia's parliament. The president served as his mentor in the following years. In 2000, the president appointed Saakashvili justice minister. The two split in 2001, however, when Saakashvili resigned to protest what he called Shevardnadze's corruption, saying it would be "immoral" to keep his post.

Later that year, Saakashvili founded the United National Movement (ENM) party, which led the bloodless Rose Revolution to oust Shevardnadze after the rigged 2003 vote. Saakashvili and other opposition leaders drove Shevardnadze out of the parliament without using weapons, wearing the roses that gave the revolution its name.

Saakashvili's efforts during the revolution made him wildly popular. In January 2004, he won the presidential election with 96 percent support. He was 36 years old.

The new president was unabashedly pro-Western and supported Georgia's entry into NATO. His government also signaled that it might try to reimpose control in the country's breakaway regions of Abkhazia and South Ossetia, which were aligned with Russia.

International observers praised the early years of Saakashvili's presidency, during which he launched economic reforms and a popular anti-corruption drive. The new administration also initiated a massive military buildup and started reshaping the army to fit Western standards.

Saakashvili's administration faced its first major challenge with anti-government demonstrations in 2007. In a surprise move, the president ordered the protesters to be dispersed by force and proclaimed a state of emergency, claiming that Russia was behind the unrest.

The military tensions escalated to armed conflict with Russia in August 2008. Georgia decisively lost the brief war; its forces scattered, leaving cities defenseless as Russian soldiers occupied or bombed them. The countries accuse each other of starting the hostilities, but many observers have blamed Saakashvili's miscalculations for Georgia's defeat. After the war, he called on the world to "roll back Russian aggression."

After being narrowly re-elected in 2008, Saakashvili faced growing criticism from members of the media and judiciary who accused him of attempting to suppress their work; reports also emerged that he had traded favors with the new class of businessmen closest to his government. By the end of his second term in 2013, the ENM had lost its parliamentary majority and many of his allies were arrested of charges of corruption and abuse of power.

Saakashvili left the country in 2013 for a teaching position in Boston. In 2014, Georgia's new government filed criminal charges against him for his response to the protests against the government in 2007. He was also charged with embezzling public funds. 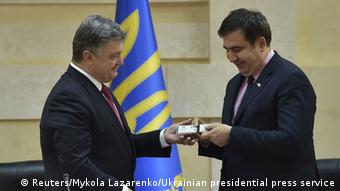 Russian troops occupied Ukraine's Crimean Peninsula in early 2014 — launching a standoff between the countries that continues today. Poroshenko won Ukraine's presidential election that spring. By 2015, he had asked his university friend Saakashvili to come to Ukraine and take over the office of governor in Odessa.

Saakashvili agreed to take the position, which required him to give up his Georgian passport for a Ukrainian one, and announced an ambitious plan to fight corruption. However, the reforms never got off the ground. After spending 18 months as governor, Saakashvili stepped down and accused Poroshenko of obstructing his anti-corruption effort.

This prompted the government to revoke Saakashvili's citizenship in July 2017. Rendered stateless. Saakashvili traveled to Poland, but returned to Ukraine in September, breaking through the border illegally with hundreds of his supporters.

Ukrainian prosecutors claim that Saakashvili took bribes from a Russian businessman to work on toppling the government.  In January, a court in Georgia sentenced him in absentia to a three-year prison term for abusing his presidential authority by pardoning four policemen who had been convicted of killing a banker in 2006.

A police attempt to arrest Saakashvili in December was thwarted by a crowd of his supporters in downtown Kyiv. Authorities managed to arrest him several days later, but he was quickly released.

In January, Saakashvili told DW that Ukraine was failing and needed to be "rescued."

Ukrainian border guards finally managed to grab Saakashvili and deport him to Poland this Monday.

Saakashvili's Movement of New Forces has described his capture as "kidnapping by Ukrainian bandits."

Talking to the Polish radio station RMF FM on Monday, Saakashvili pledged that he would return to Ukraine soon.

"I love Poland," Saakashvili said, "but my fight is in Ukraine and Georgia — and I'll fight till the end."