The Russian president has called the incident a calculated provocation designed to help Poroshenko win re-election. US Special Representative for Ukraine Kurt Volker told DW he doesn't see how it can be regarded as such. 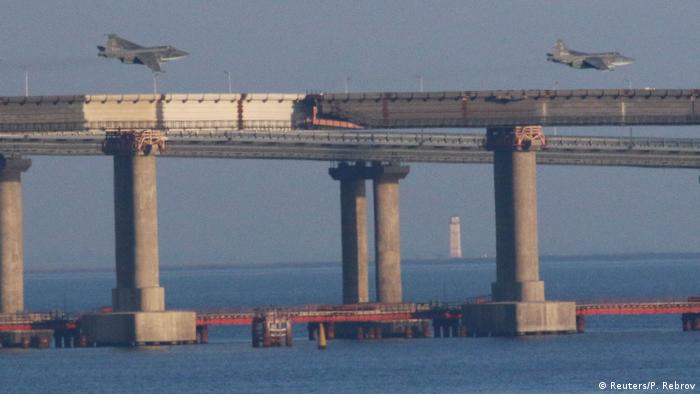 A number of international representatives weighed in on the escalating naval standoff between Russia and Ukraine on Wednesday, as the protagonists continued to blame one another for the incident that sparked it on Sunday off the coast of Crimea.

The European Union was "dismayed" by Russia's use of force against Ukrainian naval vessels in the Kerch Strait, calling the incident "unacceptable."

In interviews with German media, Poroshenko called for Germany and NATO to send naval vessels to the Sea of Azov to protect Ukraine and its interests.

EU foreign policy chief Federica Mogherini said in a statement that the bloc "expects Russia to ensure unhindered and free passage through the Kerch Strait to and from the Azov Sea, in accordance with international law."

There have been some calls among EU members for tougher sanctions against Russia following the Kerch Strait incident. Germany and France, however, have called for efforts to ease tension between Ukraine and Russia. EU leaders are expected to decide to roll the economic sanctions over for another year when they meet in Brussels in December.

Ukraine, which claims its vessels were operating in international waters when they were fired upon, boarded and seized, released data on the exact location of the ships to back that claim.

Russian President Vladimir Putin, however, directly accused Ukrainian President Petro Poroshenko of fabricating the crisis with a planned provocation. Putin said Poroshenko had done so in a bid to score political points ahead of Ukraine's 2019 presidential election. Putin's claim that the Ukrainian vessels had illegally crossed into Russian waters was echoed by Russian Foreign Minister Sergey Lavrov.

Lavrov, speaking in Geneva, said Russian border agents and interrogators had found documents on the vessels that "clearly show that these ships had been ordered to not inform the authorities of Kerch Strait and to try and break into the Sea of Azov secretly."

The Kerch Strait, which has been controlled by Russia since it annexed Crimea in early 2014, connects the Black Sea and the Sea of Azov. The European Union and Baltic neighbor states, such as Estonia, have called for Russia to restore freedom of passage to the strait in accordance with international law.

DW NewsDavid McAllister: "Russia has no right to do what it did"

'Not sure how this can be a provocation'

Speaking to DW in an exclusive interview, US Special Representative for Ukraine Negotiations Kurt Volker flatly rejected the claims put forth by Putin: "I'm not sure how this can be a provocation. A sovereign state has a navy, it's moving vessels from one of its ports to another one of its ports through its own waters. The problem here is that Russia has taken Crimea, has claimed to annex it, claims that the waters around Crimea are now Russian waters, and claims — despite a 2003 agreement with Ukraine — that Russia has unilateral control over access to the Sea of Azov and then fired on those vessels. I don't see what Ukraine has done that could be conceived as provocation."

Despite the "deep concern" that the White House said President Donald Trump and Turkish President Recep Tayyip Erdogan each expressed during a phone call on Wednesday, Volker said he was not worried about the prospect of the situation spiraling out of control: "I don't see any desire by anybody to fight against Russia to retake the territory [Crimea]. The Ukrainians cannot and should not do that, there is no desire in the West to do that. But what we need to do is to deter further Russian advances as being too costly and too useless for them, in order to create conditions to establish peace and restore the territory."

24 Ukrainian sailors were taken into custody during Sunday's incident; with three being hospitalized for injuries. All of them will face trial in a court in the Russian-controlled Crimean capital Simferopol.