Kurt Volker: ′We disagree over very substantial things′ | Europe | News and current affairs from around the continent | DW | 12.09.2018

In an interview with DW, US Special Representative for Ukraine Negotiations Kurt Volker blamed Russia for the stalemate in talks. He also reaffirmed the US's readiness to supply additional lethal weapons to Kyiv. 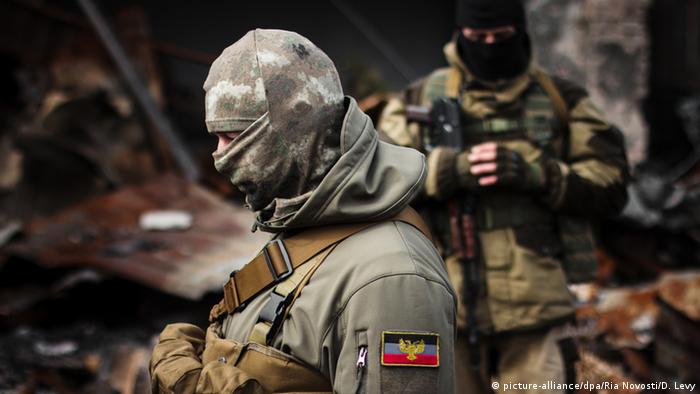 US Special Representative for Ukraine Negotiations Kurt Volker is scheduled to arrive in Kyiv on September 13. Ahead of his visit, Volker, a former ambassador to NATO, briefed DW on his ongoing efforts to resolve a stalemate in the negotiations with Russia.

DW: Ambassador Volker, some believe that a new round of sanctions is looming for Russia as a result of the latest developments in the Skripal case, with four allies backing the UK's findings on the Kremlin's role in the poisoning of the former Russian intelligence agent and his daughter. Could that have an impact on your mission?

Kurt Volker: I suppose indirectly it creates parts of the context to the atmosphere that we are all trying to address — challenges that Russia is posing. So, in a broad context, yes, it is out there. What I try to do is to focus on the very narrow issue of Russia's illegal occupation of parts of Ukraine and try to create conditions where Russia decides that it wants to stop doing that. I try to focus on those things and I don't see that the Skripal case changes that. Just as you've said, it is in the background.

Eastern Ukraine has also been in the headlines since the separatists' leader, Alexander Zakharchenko, was killed in a bomb attack in Donetsk. A new interim leader was named, and the separatists have announced elections in November. Is this a breach of the Minsk accords?

Yes. The assassination is just another indicator (as if we needed one) that there is a need for peace and security in eastern Ukraine. The presence of the Russian forces, the ongoing conflict, has created a tremendous hardship for millions of people. Not just one person being assassinated, but over 10,000 have been killed, over a million and a half displaced persons, and those that are there are suffering tremendous humanitarian consequences as a result of the conflict. In terms of Minsk, yes, several problems with this: One of them is that this is an occupied territory. So, you can't effectively have elections in the area where there is no basic security.

In addition to that, entities that we're talking about — the so-called people's republics in Donetsk and Luhansk — have no place under the Minsk agreements. They have no place in Ukraine's constitutional order. If you follow the logic of the Minsk agreements and the restoration of this territory to Ukrainian control, then these entities go away. So, holding elections: Not a legitimate exercise in itself given the security conditions, and also because these are not entities that should exist. When there is security, there should be elections for the mayors, oblast [regional] administration and so forward. 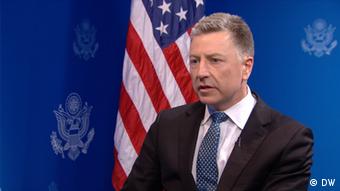 Volker is a US diplomat

Are the negotiations of the Normandy format countries —Germany, France, Ukraine and Russia — facing full stalemate now? Officials in Moscow say they are avoiding the talks because of Zakharchenko's death ...

I wouldn't say that. I've been in contact with my Russian counterpart. We disagree over very substantial things, but nevertheless we've been in touch. The French and Germans, I know, have been in touch as well. The Russian side is basically not prepared to move — and that's the problem. They have not really done anything in the past several years to try to bring about peace and security. And they seek to continue to blame Ukraine for that. Remember that this conflict is happening inside Ukrainian territory. It's not Ukraine inside Russia, it's Russia inside the Ukrainian territory. I think the Russians have apparently decided that they're not going to be making new efforts for peace right now; they'd rather wait it out and see the results of elections in Ukraine next year. As a result of that, we're not seeing anything new, just this talk of blaming others and walking away from negotiations.

In a recent interview with The Guardian, you signaled the US's willingness to supply additional lethal weapons to Ukraine. Does it have to do with rising tensions in the Sea of Azov, locked between two countries, where Ukrainian vessels have been effectively blocked by the Russian navy?

It starts really with the fundamental decision that was made last year to lift the ban on arms sales to Ukraine that has been in place during the Obama administration. The Trump administration has lifted that ban. That led to the provision of the anti-tank systems, anti-sniper systems, which are very helpful for Ukraine in defending itself. Anti-tank weapons especially, to deter any new aggression by Russia. And the US Congress has now approved a new package of funding to support for Ukraine's defense capabilities. You mentioned the Sea of Azov, and that is indeed a serious concern: Russia has dramatically increased its naval presence by surrounding ships going in and out of the sea in a much more aggressive way than before. So that's just an additional concern. But there is a rationale; we are prepared to continue to help Ukraine strengthen its defense capabilities.

Discussions about a possible peacekeeping mission in the Donbass have been going for almost a year now. How robust should be the mandate of an UN-led mission?

It needs to be robust enough to actually control security throughout the contested area. The right thing to have happen would be a staged deployment of a peacekeeping force that would grow to be able to control security throughout the entire area. I don't have a number to throw at you, but it would have to be robust enough to be able to handle that.When you look at the past year or so of our diplomatic efforts, even though Russia has not been willing to move at all, we have clearly shown Russia's responsibility for the conflict. We have increased sanctions, we have increased our support to Ukraine, and we've done all of this together as a trans-Atlantic community, with close coordination with France and Germany, which lead the Normandy format, as well as Canada, the UK, Sweden and many others.