The US president has said he might pull out of talks set to take place on the sidelines of the G20 summit in Buenos Aires. Putin has dismissed recent confrontations with Ukraine as electioneering from Kyiv. 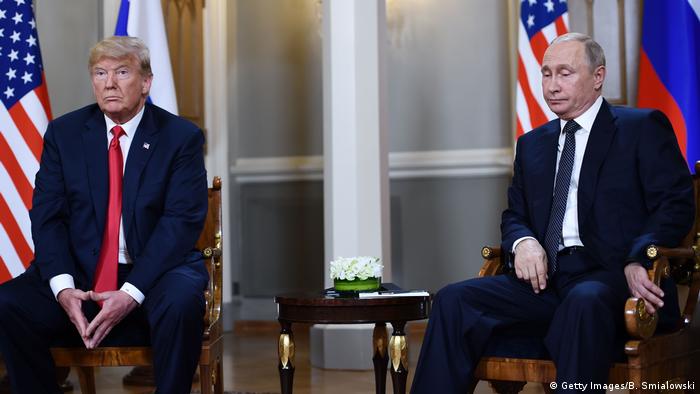 US President Donald Trump told the press late on Tuesday that he may cancel his much-touted summit with Russian President Vladimir Putin over a recent confrontation between Russia and Ukraine in the Sea of Azov.

"Maybe I won't even have the meeting," Trump told the Washington Post. He is due to meet Putin on the sidelines of the G20 conference in Argentina later this week.

The two leaders' last meeting in Finland in July ended in a bizarre press conference in which Trump appeared to accept Putin's denials of Russian interference in US elections, prompting widespread criticism from across the political spectrum back home and increased scrutiny on the upcoming talks in Buenos Aires.

Kremlin spokesman Dmitry Peskov said Russia expected the meeting to go ahead as planned after receiving no indication from US officials about a possible cancellation.

Later on Wednesday, Putin said during a press conference: "I hope I can talk to Trump in Argentina."

The Russian president said that he and his US counterpart also had to discuss "trade barriers," and that he believed Trump was still "positively inclined" to meet him.

'Ukraine is under threat'

On Sunday, Russian forces seized three Ukrainian ships off the coast of the Crimean peninsula, which was annexed by Moscow in 2014. They captured 24 Ukrainian sailors, three of whom are in the hospital and 12 of whom are sitting in pre-trial detention. The remaining sailors are due in court on Wednesday.

The incident was the first maritime confrontation between the two countries in a long-running conflict that has left more than 10,000 people dead.

Kyiv has moved to declare martial law, which Putin dismissed as an attempt to influence popular sentiment in Ukraine ahead of the country's elections in March 2019.

Speaking with German Chancellor Angela Merkel on Tuesday, Putin said he hoped Berlin could speak with officials in Kyiv "to dissuade them from further reckless acts."

Austria, which currently holds the rotating EU presidency, has said the bloc will consider further sanctions against the Kremlin at an upcoming meeting.

A Crimean court has ordered that several Ukrainian sailors be detained for two months pending trial after a flare-up with Russia’s coastguard. They face charges that could eventually carry a 6-year jail sentence. (27.11.2018)

Argentina arrests 12 'anarchists' in bomb attacks ahead of G20

The arrests came after one bomb exploded in Buenos Aires and another was thrown at a judge's home. Authorities say security is at "maximum alert" in order to avoid disturbances to the upcoming G20 summit. (15.11.2018)