The six-month sanctions extension hits Russia's financial, energy and defense industries and comes amid heightened tensions with Ukraine. NATO has also pledged its support for Ukraine. 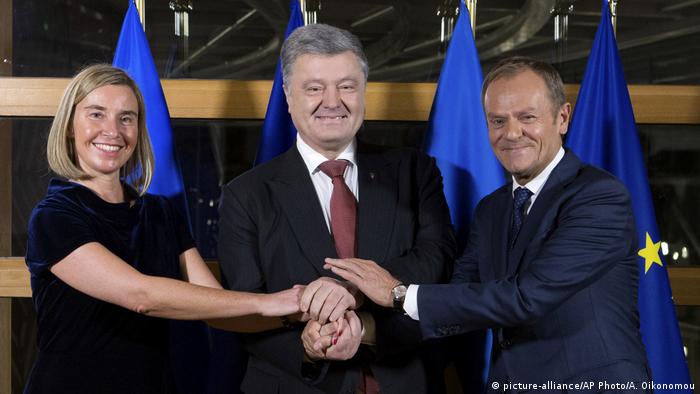 The Minsk agreement, which Russia  signed with Ukraine, Germany and France, calls for an unconditional ceasefire and for both Russia and Ukraine to withdraw heavy artillery from the front line in eastern Ukraine. Both sides have repeatedly broken the terms of the ceasefire.

The EU sanctions were originally adopted in July 2014, in response to Russia's annexation of Crimea and its support for separatists in eastern Ukraine. The sanctions target Russia's financial, energy and defense sectors; blocking Russian banks' access to EU markets and limiting EU imports to the country.

Europe has grown increasingly impatient with Russia, most recently when Russian coast guard vessels fired upon and captured Ukrainian naval vessels and crew members off the Crimean coast two weeks ago.

In a separate statement, NATO Secretary General Jens Stoltenberg announced that the military alliance had been "supporting Ukraine to improve its naval capabilities, logistics and cyber defense."

Stoltenberg assured Ukrainian President Petro Poroshenko that NATO would provide secure communications equipment before the end of the year.

Commenting on the fact that Russia continues to hold Ukrainian crew members in detention before they are to be put on trial in January, Stoltenberg said, "Russia must immediately release the sailors and ships they seized and allow freedom of navigation including free access to Ukrainian ports in the Sea of Azov."

The incident in question revolved around disputes as to whether Ukrainian ships were in international waters, as they claim, or within waters currently under the control of Russia, as Moscow claims.

The Kerch Strait, where the incident took place, connects the Sea of Azov and the Black Sea.

Stoltenberg said that Russia's actions in Ukraine were part of its "destabilizing behavior." He also decried Russia's harassment of Organization for Security and Cooperation in Europe (OSCE) monitors in Ukraine. He said monitors, "are regularly prevented from moving freely and their observation drones are regularly jammed and shot down."

Ukrainian President Poroshenko called the Ukrainian sailors "prisoners of war," adding, "Russia has no jurisdiction over 24 Ukrainian soldiers. This is confirmed by the Geneva convention."

The United Nations estimates that at least 10,000 people have been killed in the ongoing conflict.