Russia looked isolated at a UN Security Council meeting that addressed eastern Ukraine rebels' planned elections. The US, EU and a top UN official said the November 11 polls would violate the Minsk agreements. 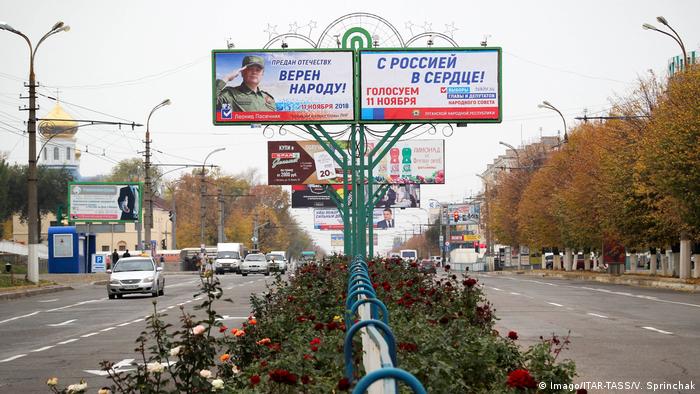 European nations and the United States labeled planned elections in Russian-backed separatist regions of eastern Ukraine illegal, in a UN Security Council meeting on Tuesday that left Moscow isolated on the issue.

The self-proclaimed Donetsk and Luhansk republics in eastern Ukraine have scheduled elections for November 11. Moscow and the breakaway regions argue the vote is necessary following the August 31 murder of Donetsk separatist leader Alexander Zakharchenko.

Ahead of the Security Council meeting, eight European powers said the elections would be "illegitimate" and "contravene commitments" made under the 2015 Minsk agreements.

The joint statement issued by council members Britain, France, Poland, the Netherlands and Sweden, urged "the separatists to abandon the plans for 'elections.'"

It also called on Russia to "bring its considerable influence to bear to stop the so-called 'elections' from taking place."

Italy, which held a rotating seat in the UN's highest body last year, as well as Belgium and Germany, which will sit on the council starting in January, also signed onto the statement.

The 2015 Minsk agreement, which was unanimously adopted by the Council at the time, has helped to reduce violence, but "there has been little progress in talks to end the fighting," UN political chief Rosemary DiCarlo told the Security Council.

"The conflict in eastern Ukraine, now in its fifth year, remains an active threat to international peace and security," she said, adding that there are regular cease-fire violations.

Under Minsk, which was agreed to by Ukraine, Russia, France and Germany, any elections must held in line with Ukrainian law and be monitored by the Organization for Security and Cooperation in Europe (OSCE).

DiCarlo said any election decisions "taken outside Ukraine's constitutional and legal framework would be incompatible with the Minsk agreements."

US deputy ambassador Jonathan Cohen accused Russia of staging "sham elections" in violation of the Minsk agreements with the aim of bolstering the separatist regions.

"Both entities are inseparable from the illegal armed groups controlled by Moscow," he said.

Russian Ambassador Vassily Nebenzia argued that the elections do not fall under the Minsk agreements because they are municipal and that "sabotage by Kyiv of its political commitments" made the vote necessary.

There is a need to "to fill the vacuum in power" left by the murder of Donetsk separatist leader Zakharchenko, the Russian ambassador said.

Moscow and rebels accuse Kyiv of orchestrating the assassination of Zakharchenko in a Donetsk cafe bombing. Ukraine has linked the bombing to infighting in eastern Ukraine and Moscow's desire to exert greater control over the separatist enclave.

More than 10,000 people have been killed in nearly four years of fighting between Ukrainian forces and rebels. The conflict has left 3.4 million people in need of humanitarian assistance and 1.5 million internally displaced.

Nearly 50,000 troops are joining NATO war games in Norway to test alliance defenses against a "fictitious aggressor." Germany is the second largest participant as it prepares to head NATO's rapid response force. (25.10.2018)