Nearly 50,000 troops are joining NATO war games in Norway to test alliance defenses against a "fictitious aggressor." Germany is the second largest participant as it prepares to head NATO's rapid response force. 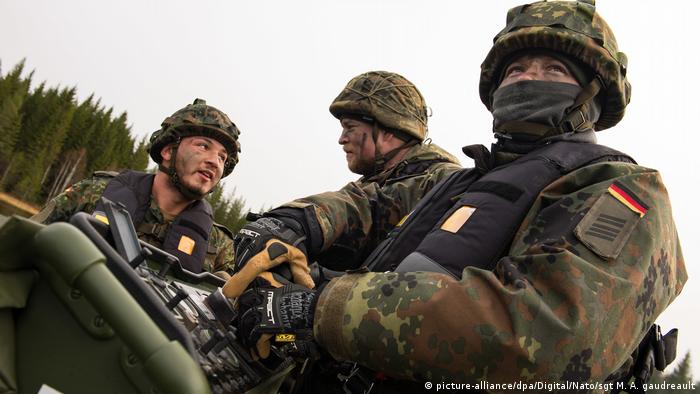 NATO launched its biggest exercises since the end of the Cold War on Thursday in Norway.

The Trident Juncture war games involve around 50,000 troops, 10,000 vehicles, 250 aircraft and 65 ships from all 29 alliance members, plus Sweden and Finland. The maneuvers will take place for two weeks in Norway and the air and sea spaces around the country.

The goal of the exercises is to test and train NATO's Very High Readiness Joint Task Force and follow-on forces. The rapid reaction force is designed to spearhead a defense against an attack on an alliance member within days and is a component of the NATO Response Force.

The Very High Readiness Joint Task Force was established by the alliance in 2014 as a deterrent in response to Russia's annexation of the Crimean Peninsula from Ukraine and Moscow's support for separatists there.

US Navy Admiral James Foggo, head of NATO's Allied Joint Force Command, told reporters in Oslo that the US commitment to the Article 5 mutual defense clause which requires all NATO member states to come to the aid of another was "rock solid."

Russia, which borders Norway, has been invited to monitor the war games but has issued a condemnation.

Moscow denounced Trident Juncture as an "anti-Russian" exercise: "Such activity... comes across as provocative, even if you try to justify it as being of a purely defensive nature," the Russian embassy in Oslo said on Thursday.

Russia regularly carries out war games of its own.

Some German politicians objected to the exercise as well, with the co-leader of the Left party in parliament slamming the move as "ludicrous, dangerous and provocative towards Russia."

"The threat of war is greater than it has been for a long time. The US president threatens nuclear armament against Russia and China and is cancelling nuclear disarmament treaties," Dietmar Bartsch told German newspaper Neue Osnabrücker Zeitung.

In Trident Juncture, alliance forces will test their readiness to restore sovereignty to Norway following an attack by a "fictitious aggressor."

The German military is participating in the maneuvers with around 10,000 troops and 4,000 vehicles, as well as Tornado and Eurofighter jets and three ships. That makes it the second largest participant after the United States.

At the beginning of 2019, Germany will take over command of the Very High Readiness Joint Task Force for a year.

NATO says its 40,000-troop "Trident Juncture" exercises to be spearheaded by a German brigade, will proceed in Norway in October. Russia was briefed about the maneuvers near its border by NATO ambassadors last May. (17.08.2018)

NATO declines to push for a diplomatic solution over dissolution, blaming Russian violations for the US move. Could a new summit between Donald Trump and Vladimir Putin offer a last chance to save the INF? (24.10.2018)

Fort Trump: Is a new US military base in Poland a realistic option?

US President Donald Trump has said he is "seriously considering" a Polish request that Washington build a new military base in the country. DW spoke with two security experts to determine the viability of such a plan. (19.09.2018)