Ukraine has signed an agreement with pro-Russia separatists allowing for local elections to be held in separatist-controlled territory in eastern Ukraine. It could pave the way for further peace talks. 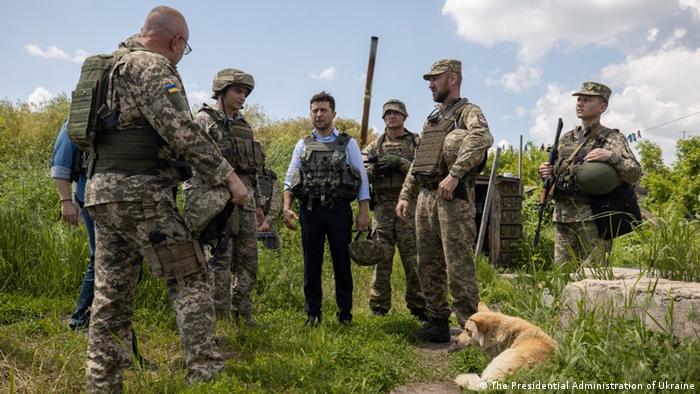 The Ukrainian government signed an agreement Tuesday with pro-Russia separatists, Russia and European monitors that will allow a local election to be held in separatist-controlled regions in eastern Ukraine.

The agreement was signed after the parties met in the Belarusian capital of Minsk, and is seen as a major step by the new Ukrainian government under President Volodymyr Zelenskiy toward resolution of the conflict in eastern Ukraine between Kyiv and pro-Russia separatists.

In preparation for the election, the Ukrainian government and separatist leaders said they would withdraw troops from two locations in the Donetsk and Luhansk regions next week.

No election 'under the gun'

President Zelenskiy told reporters in Kyiv that Ukraine agreed to a local election only when Ukraine regains control of its borders with Russia. The president has faced criticism that Ukraine is giving concessions to Moscow and for following a policy of appeasement with Russia.

The government of Ukraine and the separatists agreed that the election will be valid if European observers from Organization for Security and Cooperation in Europe (OSCE) determined that they were conducted freely and fairly.

Pro-Russia separatists are seeking a special status allowing for self-governance in the Donbass region of eastern Ukraine, large parts of which have been under separatist control since April 2014.

If the OSCE declares the elections as valid, the Moscow-backed separatists said they expect to be given long-term special status.

The election agreement has been seen as paving the way for a summit between Zelenskiy, Russian President Vladimir Putin, and the leaders of France and Germany. Russia had previously refused such a meeting, unless Ukraine agreed to hold a local election in the Donbass region.

After the agreement was signed, Zelenskiy said that nothing should stand in the way of the summit, and that a date would be announced soon. On Tuesday, French President Emmanuel Macron said he expected the summit in the coming weeks.

There were reports on Tuesday of hundreds of Ukrainian nationalists protesting the development on Kyiv's Maidan square, which symbolizes Ukraine's resistance to Russian influence over the country.