Why Putin wants to make ′new Russians′ out of Ukrainians | Europe | News and current affairs from around the continent | DW | 31.05.2019 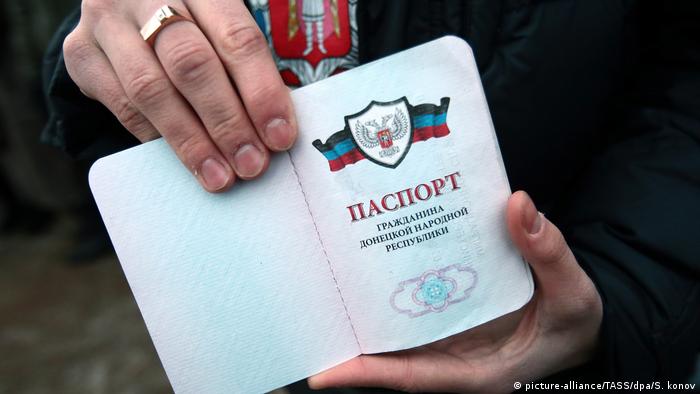 Russia desperately needs Ukrainians. At least that's the impression arising from Moscow's attempts to bring them into the country.

It all began in late April with a decree from Russian President Vladimir Putin. Since then — with Moscow's support —it has become easier for the people in the eastern Donbass region, or the "People's Republics of Donetsk and Luhansk" to get a Russian passport.

A further decree stipulates that Ukrainians who have already left regions in the Donbass, the annexed Crimea, or who are already legally resident in Russia, can be fast-tracked to Russian citizenship.

In addition, the Russian Duma is currently reviewing a law to simplify issuing foreigners in Russia with permanent residence status. Political observers suspect this law is also aimed at Ukrainians. The Kremlin insists that this is being done solely for humanitarian reasons. However, experts surmise that Russia is trying to solve its demographic problems.

Margarita Simonyan, editor-in-chief of the state-controlled broadcaster RT, posted on Facebook that if nothing is done, the population would change so much that by 2040 Russia will be a "Muslim country."

She added that people from the Donbass regions, as well as other migrants, could help maintain the "fragile status quo of the dominance of Russian Orthodox Christianity."

Anatoly Vishnevsky of the Institute of Demography in Moscow does not believe that Orthodox Russians could become a minority in their own country: "We have always had a Muslim populace, but they are no longer growing rapidly," he said. Even in some of the North Caucasus republics, he added, the high birthrates are declining.

But Rostislav Ishchenko, a political scientist who moved to Moscow in 2014 after the change of government in Kyiv, refuses to rule out the possibility that indigenous Russians could become an "ethnic minority."

However, he argues, the annexation of Crimea has brought Russia two million new citizens, plus one million refugees from the Donbass —  some of whom now have Russian passports.

As early as spring 2014, just a few days before the annexation of Crimea, Russian political theorist Alexander Borodai declared on YouTube that Russia needed Russian-speaking people to solve its demographic problems.

Borodai, who went on to become prime minister of the self-proclaimed "Donetsk People's Republic" said: "We really need Ukraine. Russia's main problem is not the economy — it is demography."

In February, Putin made a rare admission to parliament that Russia has demographic problems. According to predictions made by the Russian Federal State Statistics Service in October, a worst-case scenario would see the Russian population shrink from its current 146.9 million to 138.8 million by 2035. Even with more favorable calculations, the decline would still be around two million.

A positive development, on the other hand, could lead to a population growth of six million people. However, this would only be possible if there were more births than deaths in Russia from 2023 onwards.

But this scenario requires a significant increase in the influx of migrants; one of about half a million people per year.

How many Ukrainians could become Russians?

Ukrainian Foreign Minister Pavlo Klimki said last year that Russia was home to around three million Ukranian refugees and migrant workers. But Oleksiy Posnjak of the Institute of Demography of the Academy of Sciences of Ukraine, says the actual figure is far lower.

According to Posnjak, about 300,000 Ukrainians travel regularly to Russia. But the offer of a Russian passport will not change much: "We do not expect a large exodus of Ukrainians to Russia," he said.

But not everyone agrees. Vladimir Kipen of the Institute for Social Research in Vinnytsia in Ukraine thinks that Russia could gain up to two million Ukrainians with its passport offer, half of them being migrant workers.

"Putin's decrees are aimed at those who work in Russia, as well as those who live in the areas of Donbass no longer controlled by Kyiv and who no longer feel they have any prospects," he said. At the same time, he points out that that from a young person's perspective; a Ukrainian passport offers more freedom to travel, including visa-free entry into the EU.

But Russia also faces stiff competition: Many Ukrainians would prefer to emigrate to Poland and Western Europe,  says Anatoliy Vishnevsky from the Department of Demography of the Higher Business School in Moscow

Moreover, he believes that most people from Donbass would bring burdens with them to Russia too: "There are many pensioners."

According to Vishnevsky, the birth rate among immigrants from Donbass is even lower than the Russian average. In this sense, he argues, they would not contribute to solving Russia's demographic problems.