Volodymyr Zelenskiy has offered to grant Ukrainian citizenship to Russians, responding to a similar move by Russia. However, he coupled the offer with a dig at the situation in the neighboring country. 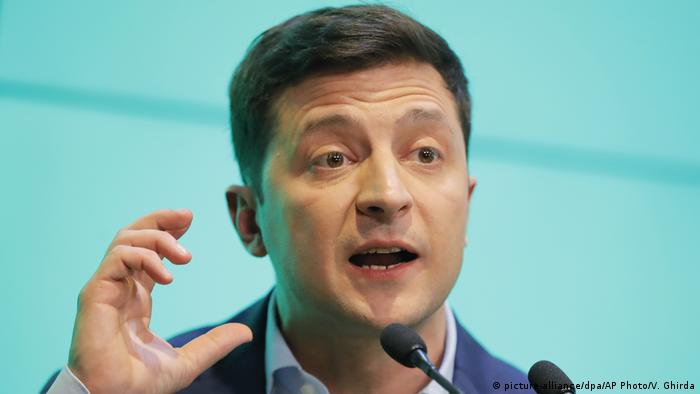 President-elect Volodymyr Zelenskiy has offered Ukrainian citizenship to Russians, but combined the proposal with criticism of the Kremlin.

"We will provide Ukrainian citizenship to representatives of all peoples who suffer from authoritarian and corrupt regimes. In the first place — the Russians, who today suffer probably the most," Zelenskiy wrote on Facebook on Sunday.

Zelenskiy's offer came in response to a Kremlin decree last week that would fast-track Russian passports for residents of eastern Ukraine, with Russian President Vladimir Putin even saying on Saturday he was considering giving all Ukrainians easier access to Russian citizenship if they wanted it.

Zelenskiy said Putin should not expect many Ukrainians to take up the offer, saying they had "freedom of speech in our country, free media and internet," in contrast with Russia.

Moscow's move has angered many politicians in Kyiv, which has been at war with Russian-backed separatists in the Donbass region in eastern Ukraine since 2014. The conflict, which began after the ouster of pro-Russian President Viktor Yanukovych, has so far killed 13,000 people.

The European Union also condemned the move, with European Commission spokeswoman Maja Kocijancic describing it as "another attack on Ukraine's sovereignty by Russia."

'New conditions' for living together

Zelenskiy, who won the second round of presidential elections a week ago, on Sunday also expressed a willingness to discuss the conflict in eastern Ukraine with Moscow. But he warned the Kremlin not to use "the language of threats [and] military and economic pressure."

"This is not the best path to ceasefire and unblocking the Minsk process," he said, referring to a peace deal sealed in the Belarusian capital in 2015 that has so far failed to bring about an end to the conflict.

"We are prepared to discuss the new conditions for how Ukraine and Russia can live together," he said, but stressed that normalizing ties depended on Russia ceasing its occupation of both Donbass and the Crimean Peninsula, which it annexed in 2014.

Zelenskiy, who is likely to be inaugurated in early June, is a newcomer to politics, having previously only played a president in a comedy on television.