How Volodymyr Zelenskiy beat Petro Poroshenko in Ukraine | Europe | News and current affairs from around the continent | DW | 22.04.2019 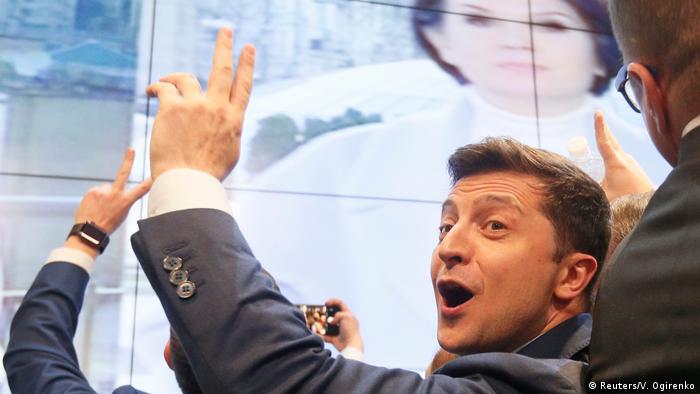 Ukraine's presidential runoff has set several records. For one, the showman Volodymyr Zelenskiy won an unprecedented share of the vote. In the 30 years since Ukraine gained its independence, the country has never seen anything like it. Less than a quarter of the electorate voted for the incumbent, Petro Poroshenko.

Another record is the speed with which Zelenskiy has arrived at the top of Ukrainian politics. He announced his candidacy on New Year's Eve and won the first round of the presidential election at the end of March — with 30% of the vote. Then three weeks after that, in last Sunday's runoff, he more than doubled that percentage. It's also a novelty for Ukraine that the election has been won not by a career politician, but by an actor. In the popular TV series Servant of the People, Zelenskiy played a school teacher who was elected president.

Pollsters have documented widespread political disillusionment in Ukraine for years. At the same time, though, they're keen to see a new type of politician.

Long before he announced his candidacy, Zelenskiy was the frontrunner. On a list of 30 people in an April 2018 poll conducted by the Kiev International Institute for Sociology (KIIS), Zelenskiy scored highest in terms of popular appeal. Forty percent of respondents rated him positively, and 40% were neutral; only 11% gave him a negative rating. By contrast, only 10% rated Poroshenko positively, while 13% were neutral and over 70% viewed him negatively.

Zelenskiy's victory is the result of deep disappointment, verging on anger, with the departing president. At the presidential public debate — which was held, at Zelenskiy's suggestion, in Kyiv's Olympic stadium — he told Poroshenko: "I am not your opponent; I am your judgment."

It seems that Ukrainians don't like to give their heads of state a second chance. It has had five presidents to date, and only Leonid Kuchma succeeded in getting himself re-elected. Commentators say Poroshenko underestimated the populace's desire for change, while also overestimating the impact of his foreign policy successes. These include visa-free travel in the Schengen zone, and the Association Agreement with the EU.

People became increasingly dissatisfied — first with the imposition of the pro-Ukraine cultural policies that followed Russia's annexation of Crimea, then with the renaming of towns, villages and streets that had Soviet names and designations, then with rising gas prices, and then with accusations of corruption in the president's inner circle. Poroshenko was also unsuccessful in his attempt to present himself as the commander-in-chief in the war in the Donbass region. His efforts to establish a Ukrainian national Orthodox church, independent of Russia, didn't help his popularity, either.

Poroshenko's election campaign was weak and lacked new ideas. Meanwhile, his opponent avoided giving interviews. Instead, Zelenskiy focused on reaching out to young voters via social networks — with great success.

The president lost support in the heartland, the central regions of the country, which became statistically more important following the loss of Crimea and parts of the Donbass. The same is true of the most densely populated region, Dnipropetrovsk. Perhaps Zelenskiy's election success is also related to the fact that he's from Kryvyi Rih, the second-largest industrial town in the region. Zelenskiy scored highest in the Russian-speaking regions in southern and eastern Ukraine, which previously voted for candidates who campaigned for a closer relationship with Russia.

One of the most important tests of his presidency will be what kind of attitude Zelenskiy adopts toward Russia. Right now he's still saying little, just that he remains committed to the current course of European integration. However, observers expect that he will be more open to compromise in talks with the Kremlin, as he himself has already indicated. One of the most important issues here will be the fate of the Minsk Agreements on reintegrating the separatist regions of Donetsk and Luhansk into Ukraine. At the moment, the process is effectively frozen.

In order to overcome the gridlock in the peace process and implement the changes he has promised, Zelenskiy needs a majority in parliament. Parliamentary elections are not due till the fall. His newly established party, Servant of the People, currently leads in polls — but a lot depends on the new president's first few months in office, and the people he decides to appoint. This is all still open. Poroshenko has already announced that he'll be staying in politics in order to defend his achievements. "The new president will have a strong opposition," he said.

One of the biggest risks for Ukraine in the aftermath of Zelenskiy's victory is the danger of fresh political divisions. The election highlighted, once again, the old split into two camps: one relatively pro-Western, and one pro-Russian. Now, though, there's a new line of division, as the pro-Western camp includes both supporters and opponents of Zelenskiy.

Another danger is that the new president's political inexperience will allow oligarchs to gain even more influence. After the first round of voting, Poroshenko claimed that Zelenskiy was a puppet of the media mogul Ihor Kolomoyskyi. Zelenskiy denies having any political connection whatsoever to the businessman, who currently lives abroad.

High hopes and expectations will prove another major challenge for the new president. However, Zelenskiy does have one advantage over his predecessors: He has promised that he will only serve one term in office.