The EU's Donald Tusk and Jean-Claude Juncker pledged to continue their "steadfast support" for Ukraine's sovereignty. Russia's Dmitry Medvedev told the new president that there was still a chance to improve relations. 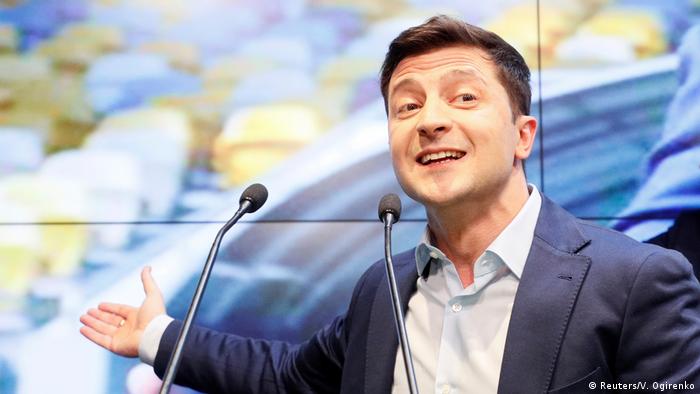 Ukraine's president-elect, Volodymyr Zelenskiy, was greeted and courted by both the European Union and Russia on Monday, following his landslide victory. The new president will now be caught in the geopolitical struggle that has shaped his nation for more than five years.

Zelenskiy, who campaigned to unify Ukraine, is said to have won in both the country's west and east, which have been traditionally divided on the question of national identity and the choice between closer ties with Europe or Russia.

Caught between Moscow and Brussels

Kyiv's pursuit of closer ties with the West and the EU was the trigger for Ukraine's ongoing conflict with Russia, which developed into a war along the border that led to Moscow's annexation of the Crimean Peninsula, as well as its incursion into Ukraine's separatist eastern provinces, in 2014.

The EU imposed sanctions on Moscow as a result. But Germany and France also led the way in negotiating the Minsk agreements between Russia and Ukraine that pushed for provisions such as a cease-fire, the withdrawal of heavy weaponry, prisoner exchanges and amnesty for separatists.

Ukraine's new president will inherit the EU's demands for full implementation of the agreement, as well as calls to rein in corruption.

German Chancellor Angela Merkel hinted as much in a congratulatory statement to Zelenskiy, while extending the 41-year-old president-elect an invitation to Berlin.

"The stabilization of Ukraine and peaceful conflict resolution are as important to me as the implementation of centralized judicial reforms, decentralization and the fight against corruption," Merkel said.

"Since the Revolution of Dignity, relations between our countries have intensified to a gratifying degree — politically as well as economically, socially and culturally," the German chancellor emphasized.

"Allow us to express our appreciation for the strong attachment to democracy and the rule of law that the people of Ukraine have demonstrated throughout the electoral process," Juncker and Tusk said.

"You can count on the EU's strong support to Ukraine's reform path," both EU leaders said, which included goals such as consolidating the rule of law, fighting corruption and economic stability.

But they also stressed that the EU "strongly believed" in the full implementation of the free trade agreement with Ukraine, which came into effect in 2016 and fueled tensions with Russia.

Kremlin spokesman Dmitry Peskov said it was too soon to say whether Russia could work with Zelenskiy in the future.

"It's too early to talk about President Putin congratulating Mr Zelenskiy, or about the possibility of working together. It will only be possible to judge based on real actions," Peskov said.

Medvedev addressed the fact that Zelenskiy was no friend to Moscow. The Russian prime minister said he harbored "no illusions" about a change in rhetoric from Zelenskiy's campaign of "repeating the same ideological tenets we know all too well, targeted at various social groups."

Nonetheless, Medvedev said there was still a chance for both countries to improve their relations and wished the new government "common sense." He highlighted the "inherent value" of relations between both nations which, in his view, "transcend all momentary political considerations."

Television actor and satirist Volodymyr Zelenskiy will be the next president of Ukraine. His election campaign lacked substance — but was both aggressive and successful. So what are his plans for the country? (22.04.2019)

After mostly slamming politicians for years, comedian Volodymyr Zelenskiy has taken a surprise political turn: Now, the young upstart might just be Ukraine's next president. What are his chances? (23.03.2019)