Ukraine: Zelenskiy outshined Poroshenko on way to victory | Europe | News and current affairs from around the continent | DW | 21.04.2019

Television actor and satirist Volodymyr Zelenskiy will be the next president of Ukraine. His election campaign lacked substance — but was both aggressive and successful. So what are his plans for the country? 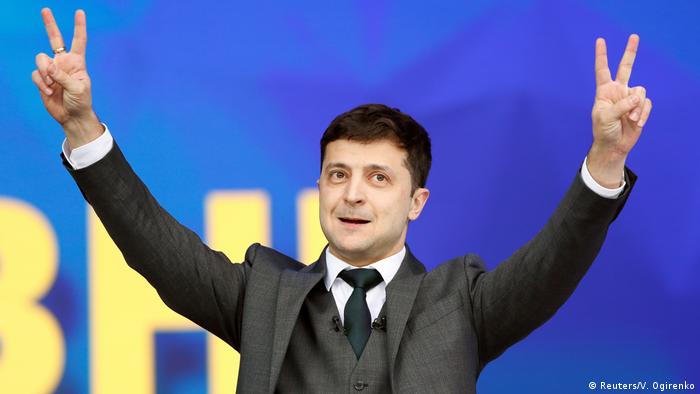 The saying "He who laughs last, laughs longest" may turn out to be doubly applicable to Volodymyr Zelenskiy. Making people laugh has been his main occupation for years — and it looks like now he has had the last laugh in his improbable landslide victory in the runoff of Ukraine's presidential election.
In the first round, on March 31, Zelenskiy got about 30%, almost twice as many votes as the incumbent, Petro Poroshenko, whom he faced again on Sunday. Exit polls indicated he garnered 73% of the vote, with the incumbent eking out a mere 25%.

Zelenskiy has been sworn in as president of the former Soviet republic once before — on film. As the leading actor in the popular TV comedy series Servant of the People, Zelenskiy played a history teacher who becomes president through a series of unusual events. Many observers say the series has a great deal to do with Zelenskiy's real-life political success: It plays on political corruption and Ukrainians' desire to fight back against the establishment, promising a fresh start thanks to a political newcomer. This is exactly how Zelenskiy positioned himself in the election.

At 41, Zelenskiy is set to become Ukraine's youngest-ever president. He's a short, exuberant man with a distinctive, pleasantly rough voice. The son of a university professor from Kryvyi Rih, the heart of the iron ore industrial region in southeastern Ukraine, he's probably the best-known and most successful comedian in the country. Zelenskiy and a group of other satirists have been lampooning the country's top politicians for almost 20 years, producing TV specials, feature films and comedy series.

Critics don't see Zelenskiy as an independent political figure; they suspect an alliance between the comedian and Ihor Kolomoyskyi, a once-influential businessman from Dnipro, the former Dnipropetrovsk. This alleged alliance, they say, aims to prevent another mandate for Poroshenko. Both men have vehemently denied any such collaboration.

It wasn't just Zelenskiy's candidacy that was unusual; his election campaign was, too. There were hardly any of the classic appearances in the town square; instead, he toured the country with his show in the run-up to the first vote, while Kolomoyskyi's TV station broadcast various comedy programs that featured the candidate.

Zelenskiy gave hardly any interviews; for the most part, he spoke only to media outlets that favored him and communicated with his supporters through video messages on social networks. By using creative election slogans and youthful idioms, he succeeded in mobilizing young Ukrainians in the east of the country, who usually tend to be politically apathetic.

Before the second ballot, his messages became increasingly aggressive in tone when talking about the incumbent president. Zelenskiy came across like a hunter chasing an injured animal. At the same time, he avoided every opportunity to answer critical questions about his nebulous political ideas, sending his advisers onto talk shows in his stead. Zelenskiy did agree to a television duel with Poroshenko, but only under specific conditions: that it should take place in a stadium rather than a TV studio.

Zelenskiy's election manifesto only hints at what the country can expect. He is promising people the Ukraine of their dreams: a country without corruption, with high salaries and pensions, fast internet and good roads. There should be more "power for the people," he argues — more referendums, more justice and more security. The war in eastern Ukraine should come to an end, Zelenskiy says, without going into detail about how exactly this can be done. His strategy is clearly to try to please as many voters as possible.

But clever media strategy alone doesn't explain his success: the Ukrainian political landscape has had a disastrous image for decades. Poroshenko, who is disliked or even hated by large sections of the population, also has to ask himself whether he made a correct assessment of his chances of reelection.

The Ukrainians who were the driving force behind the change of power in 2014 and who consider themselves pro-Western patriots regard Zelenskiy's success with a mixture of worry and despair. On social networks they point out that, firstly, he is a Russian-speaking comedian who has caricatured Ukrainian patriotism. Since Moscow's annexation of Crimea in early 2014, the rejection of both Russia and the Russian language has been a focus of Ukrainian politics.

Secondly, they say, Zelenskiy has no political experience; they fear he could lead the country into crisis. Some warn there could be a stealthy return of forces close to former President Viktor Yanukovych, who fled to Russia following his ouster.

One of the big unknowns is how independent a President Zelenskiy would be, or how much influence his advisers, and oligarchs, would have over him. In any event, victory in the presidential election would not, on its own, allow him to govern the country. Parliamentary elections are set for autumn, and there's speculation in Kyiv that Zelenskiy might bring these forward in order to get his own party — which until now has more or less only existed on paper — into parliament. It's named after his TV show, Servant of the People, and its chances of success are good.

Many Ukrainians are tired of corruption and yearning for a fresh face. That's why they're pinning their hopes on comedian and political neophyte Volodymyr Zelenskiy. Incumbent Petro Poroshenko looks unlikely to win. (20.04.2019)

Merkel meets Ukraine's Poroshenko, but not his election rival

While Angela Merkel met only with Ukrainian President Petro Poroshenko, France's president also met his election rival. Merkel came under criticism for not meeting with the novice politician, who is tipped to win. (12.04.2019)