Ukraine election: Can a comedian unite a divided country? | Europe | News and current affairs from around the continent | DW | 20.04.2019

Many Ukrainians are tired of corruption and yearning for a fresh face. That's why they're pinning their hopes on comedian and political neophyte Volodymyr Zelenskiy. Incumbent Petro Poroshenko looks unlikely to win. 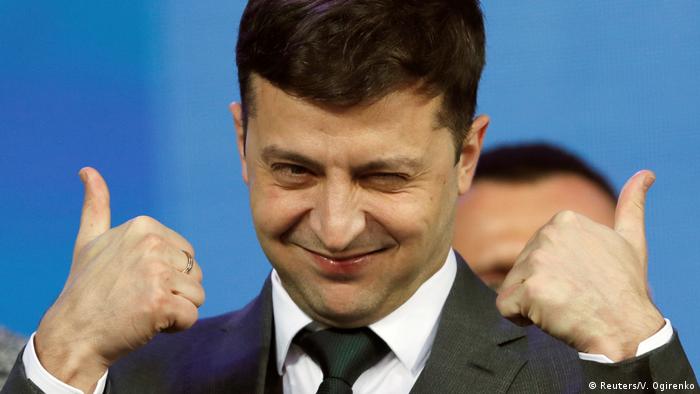 Ukrainians head to the polls on Sunday to pick a new president. Five years after the protests that transformed the country, the country remains divided. Ahead of the runoff election, a bitter debate is raging over whether to reelect incumbent President Petro Poroshenko or opt for his challenger, television comedian Volodymyr Zelenskiy.

The latest polls indicate Zelenskiy could win as much as 60% of the vote; Poroshenko is projected to take roughly half that amount. Zelenskiy won the first round of voting on March 31 by a similarly wide margin.

The first vote showed Zelenskiy has supporters across the entire country. A political newcomer, he won the majority of the votes in nearly every region — a rare achievement in Ukrainian politics.

Zelenskiy launched his candidacy with a surprise New Year's Eve announcement and soon gained a strong following of hopeful voters. He enjoys his strongest support in eastern and southern Ukraine, where many people speak Russian and feel the Ukrainian language and culture has been imposed on them under Poroshenko. Zelenskiy himself was born in this region, speaks Russian and is seen by many Russian-speaking Ukrainians as one of them. He also has support in central and select western regions.

Many voters are drawn to Zelenskiy because of his popularity as a comedian, and because he is untarnished by the world of Ukrainian politics. After decades of political instability and corruption, Ukrainians are yearning for a fresh start, so much so that they appear willing to entrust the presidency to a political newbie.

Zelenskiy's image has in part been shaped by the popular television show Servant of the People, in which he plays a teacher who becomes president and weeds out corruption. His TV character, who rails against "corrupt and greedy" politicians, expresses what many disgruntled Ukrainians feel today.

Read more: Is this Ukrainian comedian winning votes because of his political sitcom?

Poroshenko: Back against the wall

After a strong showing in the first round of voting, Zelenskiy has largely stopped campaigning and giving interviews, expressing confidence he will enjoy similar success in Sunday's runoff. Occasionally, he has addressed supporters with ironic video messages on social media. For days, users joked about whether presidential candidates should take drug and alcohol tests, as demanded by Zelenskiy. Concrete policies, however, have rarely been discussed, aside from a debate at Kyiv's 70,000-seater Olympic Stadium on Friday. 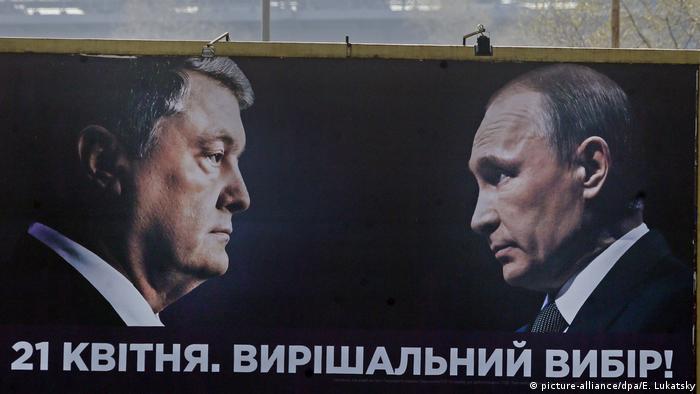 Poroshenko has been feeling the pressure of Zelenskiy's rise, giving in to almost all of his demands and even trying to copy some of his challenger's unconventional campaign tricks. He attempted to appeal to young voters by offering Poroshenko-themed stickers for the Telegram messenger app, but the effort came off as uninspired and stale compared to Zelenskiy's stickers. Poroshenko has just 53,000 Telegram followers, while Zelenskiy has almost three times that amount.

In the face of an increasingly likely Zelenskiy victory, Poroshenko tried to portray his challenger as a pawn of Russian President Vladimir Putin. But the move backfired, and Poroshenko was asked to account for a controversial campaign poster featuring Putin's image.

After five years in power, Poroshenko is gradually coming to realize that the populace is more concerned about growing poverty and rising gas prices than his foreign policy achievements, such as earning Ukrainians visa-free entry to the European Union. The president and his aides have also been accused of corruption, and few political parties still support him. Most assume Zelenskiy will win.

Zelenskiy's lack of a concrete policy vision has raised questions about how exactly his potential presidency will take shape. If he abandons Ukraine's pro-Western orientation and instead turns toward Russia, it's difficult to predict how the populace would react.

A decision by former President Viktor Yanukovych to spurn closer ties with Brussels in favor of Moscow helped fuel the violent street protests that ultimately led to his ouster in 2014. Zelenskiy, for his part, has vowed to maintain close ties to the EU, but he has also indicated a willingness to compromise with Russia.