Ukraine elections: A third of voters dare to experiment | Europe| News and current affairs from around the continent | DW | 01.04.2019

Ukraine elections: A third of voters dare to experiment

A triumph for Zelenskiy, a slap in the face for Poroshenko and deja vu for Tymoshenko: The results of the first round in Ukraine's presidential election point to a harsh battle before the runoff ballot in three weeks. 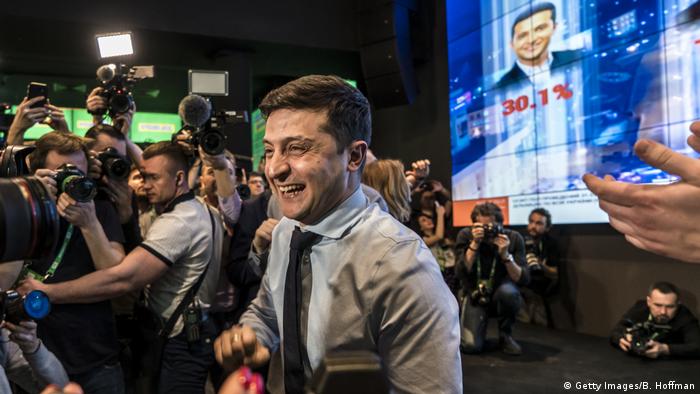 It took Volodymyr Zelenskiy exactly three months to go from announcing his presidential run on New Year's Day to placing first among the almost 40 candidates in the first round of Ukraine's election. The results of post-vote surveys conducted by three highly regarded polling institutes are without precedent in the country's history.

According to the polls, the TV comedian and political newcomer Zelenskiy garnered about 30 percent of the votes. President Petro Poroshenko came in second with 18 percent. Former Prime Minister Yulia Tymoshenko was in third place, with 14 percent. The first preliminary results that were released paint a very similar picture.

Poroshenko puts on a happy face

Front-runner Zelenskiy could indeed expect a win in the runoff election on April 21. The 41-year-old comedic actor, who made an appearance with his wife in Kyiv to see his campaign team last night, smiled a lot and was expressly polite with journalists. But he held back on explanations.

Poroshenko also smiled a lot, although this seemed strange in view of his results. After the polling stations closed, the 53-year-old president, at his headquarters, looked like a man whose worst fears had not materialized. Apparently, he was seriously expecting to miss the runoff. This is the only way to explain his joy at the results of the first round, which are like a slap in the face. 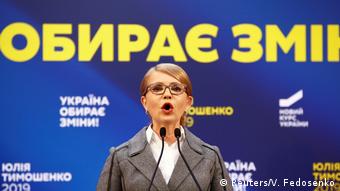 Two-time former PM and repeat presidential candidate Tymoshenko has repeatedly decried "corrupt" pollsters, though she is no stranger to being accused of corruption

Tymoshenko stood in front of the press with a petrified face. Only a few weeks ago, the former prime minister was regarded as one of the leading opposition politicians and a favorite. Now she is apparently out of the race, even though she has indicated that she may not recognize the election result. She described the pollsters as "corrupt" and referred to her own surveys, according to which she came in second with about 20 percent of the votes.

Many Ukrainians thought her performance was like deja vu. In 2010, when she lost the runoff to then-opposition politician Viktor Yanukovych by about three percent, she initially refused to recognize the result. She spoke of falsification. At the time Tymoshenko said she would go to court, but would not call for protests on Maidan, the independence square in Kiev. How she will behave this time remains to be seen.

One result is the fact that about a third of Ukrainians are willing to experiment by taking a man from show business, who for years made fun of the country's politicians, and elevating him to the presidency. A highlight of Zelenskiy's acting career was the TV series "Servant of the People," in which he plays a history teacher who becomes president.

He has succeeded in generating hype among a large part of the population, especially young people in the eastern and southern parts of the country and inspiring those fed up with systemic dysfunction and corruption. And this, despite espousing very few actual policies in his platform. 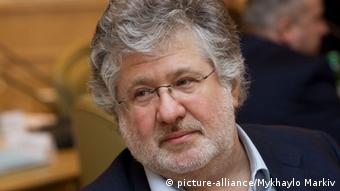 Business magnate Ihor Kolomoyskyi: Comedian Zelenskiy's business partner, but rumors persist that they may be in cahoots to prevent Poroshenko's re-election

The popular TV channel "1+1" of Ukrainian businessman Ihor Kolomoyskyi played a decisive role in this. Officially, he and Zelenskiy are only business partners. But critics suspect that they have resolved to prevent Poroshenko from being re-elected. Before the elections, the station constantly showed films and shows with Zelenskiy in which reality and fiction were mixed.

Another result is the fact that Poroshenko either overestimated his popularity or simply risked running for a second term despite knowing the truth. The low turnout of Ukrainians in the west of the country, on whose patriotism Poroshenko had counted, is an unpleasant surprise for him. Dissatisfaction with corruption and a low standard of living outweighed and eclipsed the president's foreign policy achievements, in particular his rapprochement with the EU and his role in creating an Orthodox national church independent of Moscow.

What to expect in the runoff

Poroshenko acknowledged voters' dissatisfaction, saying he had "heard" the people who had voted for his opponents. In view of the danger that time could be turned back, he called for unity. Judging by his speech on election night, he wants to turn the runoff into a referendum on independence and Ukraine's path to NATO and the EU. His apparent motto: Without me, Ukraine will be thrown back and the "aggressor" ― Russia, according to Ukrainian authorities ― will triumph.

But this rhetoric did not bring Poroshenko victory in the first round of elections. For a breakthrough he will have to offer Ukrainians something else.

Even before the polling stations closed, there was speculation about a possible alliance between Zelenskiy and Tymoshenko. She herself neither confirmed nor denied this. Tymoshenko merely said that she would not hold any talks before the end of the vote count.

Before the vote, compromising material about the candidates was disseminated. Zelenskiy was dragged through the mud on social networks; the same happened to Poroshenko on TV. He said he would sue Kolomoyskyi's TV station for a report according to which Poroshenko was allegedly responsible for the death of his brother.

The fight for victory in the runoff promises to become even more bitter. But even after that, all candidates, including Tymoshenko, will have to be reckoned with. In autumn, parliamentary elections will take place in Ukraine, which are formally even more important than the presidential election. Since the change of power in 2014, the constitution has been in force again, according to which the government has more power than the president. All those who lose out in the presidential election will thus have another chance in six months' time.

Amid corruption woes and conflict, voters in Ukraine are set to choose their next president. A TV comedian is currently leading the polls, but his victory is not a given. DW breaks down the election. (31.03.2019)