Crisis-hit Ukraine desperate for savior in presidential election | Europe| News and current affairs from around the continent | DW | 31.03.2019

Amid corruption woes and conflict, voters in Ukraine are set to choose their next president. A TV comedian is currently leading the polls, but his victory is not a given. DW breaks down the election.

Seldom has the outcome of a presidential election in Ukraine been as unpredictable. The country has gone to the polls in what is the first regular election for the head of state since May 2014, when an early vote was triggered by the ouster of then-President Viktor Yanukovych. In the wake of violent demonstrations in Kyiv, known as the Euromaidan revolution, he went into exile in Russia.

Incumbent President Petro Poroshenko, a 53-year-old businessman who made a surprise foray into politics, won in 2014. This time he has reason to fear for his chances for re-election as he battles another outsider enjoying a similarly fast ride to the top.

Around 36 million eligible voters can choose between 38 candidates. Most of them, however, have no hope of winning. Surveys show that three names stand the best chance of reaching the second ballot, which is scheduled for April 21. 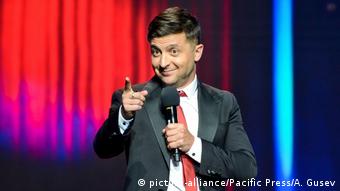 Zelenskiy has become the unexpected front-runner

Popular television personality Volodymyr Zelenskiy is considered the favorite. Depending on which poll you choose, the 41-year-old comedian's support ranges from 20 to almost 30 percent. This means Zelenskiy enjoys a clear lead over Poroshenko and former Prime Minister Yulia Tymoshenko, both of whom are sitting at around 17 percent.

Zelenskiy is known for several satire shows and a comedy series in which he plays a schoolteacher who becomes president. The third season went to air just days before the vote.

Zelenskiy has campaigned as a newcomer to the political game who scores points with young voters. Poroshenko and Tymoshenko, on the other hand, are viewed as representatives of the old, ineffective political establishment.

Zelenskiy is seen as a fresh face who can solve the country's myriad of problems, many of which have worsened under Poroshenko. The incumbent is outright hated or at least unpopular with many voters in the country, and also appears to be beleaguered by recent revelations of corruption in the state arms industry. Poroshenko's foreign policy successes, such as visa-free travel to the European Union, have not been able to offset the disapproval fueled by inflation and cronyism. 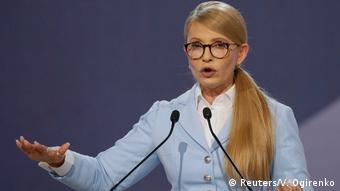 Tymoshenko has her best shot yet of becoming president

Tymoshenko, 58, has the best shot of her career thus far to become the first female president of Ukraine. Nevertheless, she remains deeply divisive in the country. Her critics view her as unscrupulous and power-hungry. Tymoshenko's biggest disadvantage may be that she has been a continuous presence on the Ukrainian political stage for more than two decades.

Despite question marks surrounding his two main challengers, Zelenskiy's victory is not a given. His support appears to be limited to the Russian-speaking population in eastern and southern Ukraine. Zelenskiy's critics also accuse him of being a puppet of powerful oligarch Ihor Kolomoisky.

The key topics defining the campaign

To patriotic Ukrainians, Poroshenko has the most appeal. The president presents himself as commander-in-chief in the war against pro-Russian separatists in eastern Ukraine and accuses his strongest opponents of being Moscow's fifth column. Poroshenko is campaigning on his foreign policy record; he wants to continue Ukraine's move away from Russia and towards the West.

Tymoshenko, meanwhile, has focused on domestic politics, promising a fresh start for the country and pushing for a change to the constitution in favor of a purely parliamentary democracy. With a promise of lower gas prices, she is hoping to score points with poorer voters. Tymoshenko has also said she wants to lead Ukraine into the EU and NATO.

Zelenskiy's electoral platform is mostly made up of vague, populist-like promises. Among other things, he wants to introduce more direct democracy by holding referendums. He has also railed against corruption, low wages and pensions, and increasing labor migration.

What is the risk of fraud?

In the past, allegations of fraud and manipulation have overshadowed elections in Ukraine, including during the Orange Revolution in 2004. Recently, election observers from the Organization for Security and Co-operation in Europe (OSCE) have attested to comparatively fair elections, but again there are many warning signs of manipulation. An interim report by OSCE observers states that "many accusations of vote buying have been received throughout the country."

Challenges for the future president

Apart from the war in eastern Ukraine and the need to modernize the army, the new president will face numerous challenges, corruption being chief among them. There are calls to reform the judiciary, police and health care system, among other sectors. There is also the possibility that Russian gas will stop flowing through the country on its way to Western Europe starting in 2020, which will significantly weaken Ukraine financially and make it more vulnerable to destabilization attempts by Moscow.

Whoever wins, reforms are unlikely to come in the immediate aftermath of the vote. A new parliament is due to be elected in the fall, after which a government coalition must be formed. Only then will it be clear who is in charge of the country.