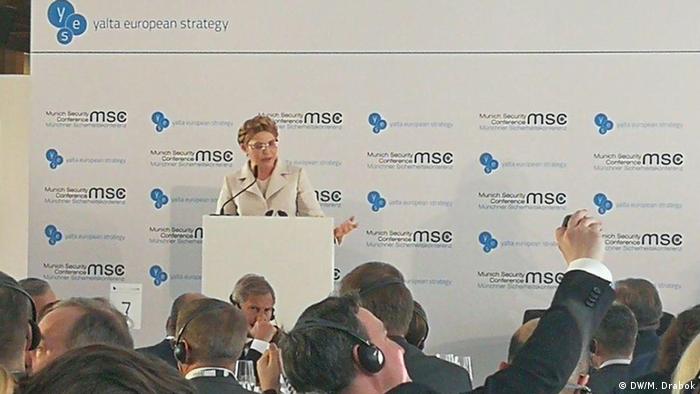 With presidential elections in Ukraine coming up in March, the country is set to see changes at the top, Ukraine's former prime minister Yulia Tymoshenko told DW on the sidelines of the Munich Security Conference.

"Ukraine is in for a reset of government," Tymoshenko told DW's Maxim Drabok. "I am sure of it."

Tymoshenko is one of the key candidates ahead of the March 31 poll, alongside current President Petro Poroshenko. While both of them are currently trailing behind political outsider Volodymyr Zelensky, analysts still believe the 41-year-old comedian is unlikely to triumph against Poroshenko or Tymoshenko in a runoff vote.

Both President Poroshenko and Tymoshenko have pledged to bring Ukraine into NATO and the EU. However, Tymoshenko told DW that there are some obvious differences between her and the current president.

"It is not enough to simply declare (in favor of) joining the EU and NATO, the president needs to be the main agent of transformation in the country," Tymoshenko said.

"We need deep, real change based on the values of EU and NATO," the 58-year-old Ukrainian said. "But right now, unfortunately, the government is not sticking to these principles and is not turning them into reality."

Speaking to DW, Tymoshenko also commented on the controversial Nord Stream 2 project to deliver gas from Russia directly to Germany. Ukraine opposes the project for fear of losing its role as a gas transit nation. With the project completed, Russia would be able to shut off the pipelines passing through Ukraine and deny Kyiv lucrative gas fees, without jeopardizing its buyers in Germany.

In Munich, Tymoshenko said that Nord Stream 2 was unnecessary and ran against Ukraine's interests in terms of its energy economics.

"Ukraine can provide transport for all gas needed for Europe without any problem. That is why it is very regrettable that everything is being decided without consulting Ukraine," she said.

From prime minister to prisoner

Ukraine's association agreement with the EU repeatedly states that Kyiv should be consulted over such issues, according to Tymoshenko.

"This is why we hope that all necessary decision would be made to not build political 'streams' and instead follow economic goals and partnerships," the former prime minister added.

Tymoshenko first grabbed international headlines as one of the leaders of Ukraine's 2005 Orange revolution, before serving as the country's first female prime minister between 2007 and 2010.

Tymoshenko ran for president in 2010, losing to pro-Russian leader Viktor Yanukovych. She was subsequently sentenced for abuse of power in a trial that, in the West, is seen as politically motivated.

The politician was released from prison in the final days of the 2014 Maidan uprising, as Yanukovych fled the country. She then ran for president in the same year, but lost to Poroshenko.