After mostly slamming politicians for years, comedian Volodymyr Zelenskiy has taken a surprise political turn: Now, the young upstart might just be Ukraine's next president. What are his chances? 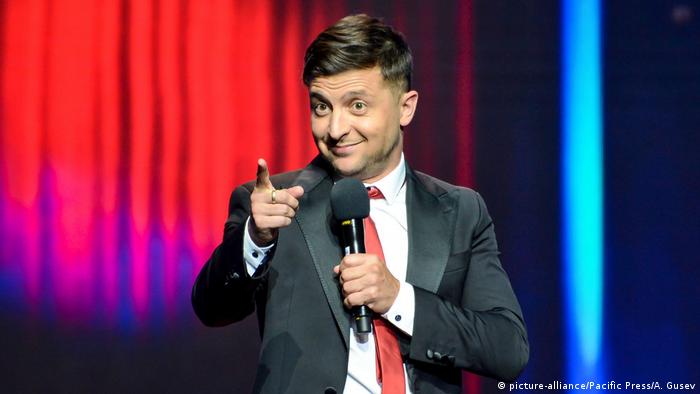 The presidential election in Ukraine is scheduled for March 31 — coincidentally, the day before April Fool's Day, on which the results are announced. For one of the candidates, that's great: "April 1 is a fantastic date for me to win. After all, I am a clown, aren't I?" comedian-turned-candidate Volodymyr Zelenskiy said in an interview with the online newspaper Ukrayinska Pravda.

In just a few months, and with clever plays on words, irony and a twinkle in his eye, the popular television comedian has become one of the favorites in the race. Zelenskiy has a 20 to 25 percent share of the vote, ahead of incumbent Petro Poroshenko and opposition candidate and former Prime Minister Yulia Tymoshenko, according to opinion polls. His entry into the runoff seems very likely. How did he do it?

From jokester to contender

The lively 41-year-old has a distinctive, slightly hoarse yet pleasant voice. The son of a university professor from Kryvyi Rih, a city in the heart of the iron ore industry region in southeastern Ukraine, he was the talented class clown who rose to become perhaps the country's most famous and most successful comedian. Political satire is his game.

Under the name Studio Kvartal 95, Zelenskiy and a group of other cabaret artists have been touring Ukraine for almost 20 years, lampooning the country's top politicians. They produce TV shows, feature films and comedy series, including the "Servants of the People" series in which Zelenskiy plays a history teacher who is elected president. Accordingly, that is what he named his new party, which was more or less unknown until recently.

Critics do not see Zelenskiy as an independent political figure; they suspect an alliance between the comedian and Ihor Kolomoyskyi, a once-influential businessman from Dnipro, the former Dnipropetrovsk. The alleged alliance, they say, aims to prevent another mandate for Poroshenko. Zelenskiy announced his candidacy on New Year's Eve from Kolomoyskyi's "1+1" TV station, which also features the comedian's shows and films. The president's New Year's Day speech was postponed for his brief video message — a clear snub against the incumbent.

In fact, Poroshenko and Kolomoyskyi have faced off more than once in the past, mainly concerning differing points of view on the oil industry and the banking sector. Zelenskiy and the Ukrainian business oligarch have dismissed the notion of any kind of political cooperation in the presidential election.

Read more: Ukraine's presidential hopefuls: What you need to know

Just a few years ago, no one would have expected Zelenskiy to run for president — perhaps not even the comedian himself. Politics is a complicated business he doesn't fully understand, the comedian once said in an interview with the Ukrainian offshoot of the Russian Komsomolskaya Pravda tabloid. His business, he argued, is show business. "When well-known personalities outside politics promise you the moon, that is pure populism," he said at the time.

Apparently, Zelenskiy has changed his mind. Today he does exactly what opponents and observers describe as pure populism. In his electoral program, which is peppered with humorous twists and turns, Zelenskiy promises people the Ukraine of their dreams: a country without corruption, with high salaries and pensions, a fast internet and good roads.

There should be more "power for the people," he argues — more referendums, more justice and more security. The war in Eastern Ukraine should be ended, Zelenskiy says, though without going into detail about how exactly this can happen. In a rare TV appearance, he merely said negotiations are necessary. Some observers in Kyiv, however, suspect that Ukraine's most popular presidential candidate avoids talk shows so as not to have to admit to a lack of expert knowledge. 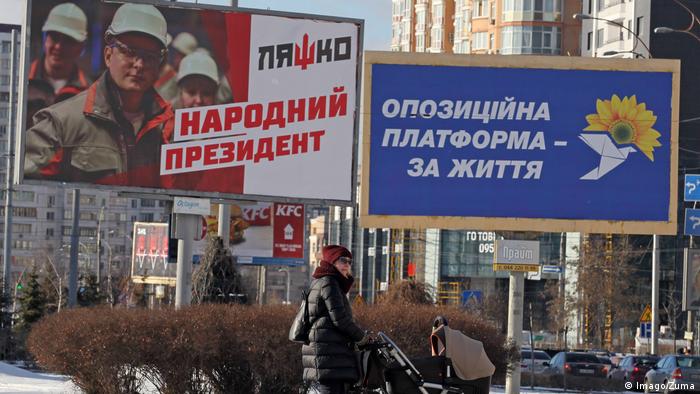 Zelenskiy's success comes as a surprise also because on some key issues, he represents the opposite of Ukraine's most recent mainstream politics: He usually speaks Russian, and for the most part, he represents the Russian-speaking population in eastern and southern Ukraine.

For years, the comedian used his shows to rail on pro-Western politicians like then-President Viktor Yushchenko, while the pro-Russian Viktor Yanukovych was mostly handled with kid gloves. Zelenskiy also caricatured Ukrainian patriotism, if rather subtly and inconspicuously.

Observers explain Zelenskiy's success with many Ukrainians' longing for fresh faces in politics. The candidate aims primarily at younger voters who know him and find him funny — people like Andriy, a 31-year-old IT expert from a provincial town in eastern Ukraine. "He seems to be the only candidate who can do better," says Andriy, who is disappointed with Poroshenko and does not trust Tymoshenko. Corruption has recently become "even worse," he says.

Despite high poll numbers, Zelenskiy's victory in the presidential election seems unlikely: He is simply too polarizing. But he may well make re-election more difficult for Poroshenko, who is probably at least somewhat worried about the prospect of a runoff. The most likely beneficiary of such a scenario would be perpetual also-ran Tymoshenko, who is currently in second place in the polls and could better draw in disappointed Poroshenko supporters into a runoff than could Zelenskiy. But even if the comedian does not succeed, getting name recognition on the ballot is already a victory, given that he is simultaneously warming up for the autumn 2019 parliamentary elections. His party is ahead in parliamentary polling and could be one of the big winners.

With two elections next year, Ukraine is facing upheaval on the domestic front. Russia, meanwhile, is shaking up its foreign policy, particularly with the United States, after withdrawing from the INF treaty. (24.12.2018)

According to a draft bill, Russian observers will be excluded from all future elections in Ukraine. The OSCE has misgivings, experts are torn between appreciation and criticism – and have offered a solution. (08.02.2019)