It's official: An independent Orthodox Church of Ukraine has been born with the blessing of Patriarch Bartholomew I. Ukraine's President Petro Poroshenko heralded the split from Russia, but Moscow is less than pleased. 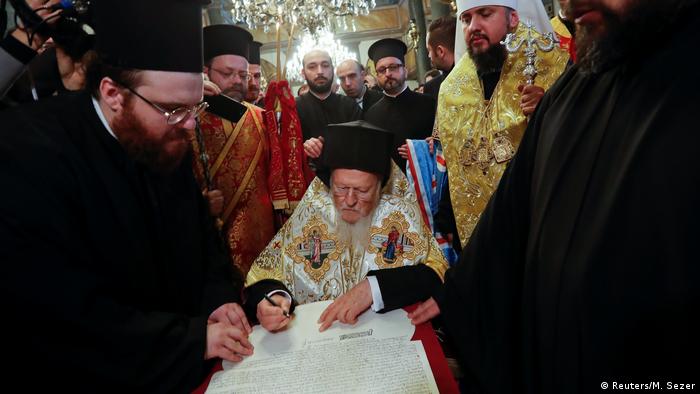 The Orthodox Church of Ukraine was formally granted independence at a ceremony in Istanbul on Saturday, completing a historic split from Russian religious control that had been ongoing since 1868.

Ukrainian leaders see an independent church as a crucial bulwark against Russian interference, but Russia strongly opposes the split, comparing it to the Great Schism of 1054 that divided Christianity into the Eastern Orthodox churches, with leadership based in present-day Istanbul, and the Catholic Church, with its seat in Rome.

In a solemn ceremony filled with liturgical singing, the leader of the Orthodox Church, Patriarch Bartholomew I, signed a decree known as a "tomos" that grants autocephaly, or independent national religious authority, to the Ukrainian church.

"The pious Ukrainian people have awaited this blessed day for seven entire centuries," Bartholomew I said in his address. Ukrainians can now enjoy "the sacred gift of emancipation, independence and self-governance, becoming free from every external reliance and intervention," he added.

The patriarch first endorsed Ukraine's entreaties for an independent church in October. Infuriated, the Russian church broke ties with the patriarchy in Istanbul, the center of the Orthodox belief for some 300 million Christians worldwide. In November, Ukrainian President Petro Poroshenko and Bartholomew signed a cooperation agreement. 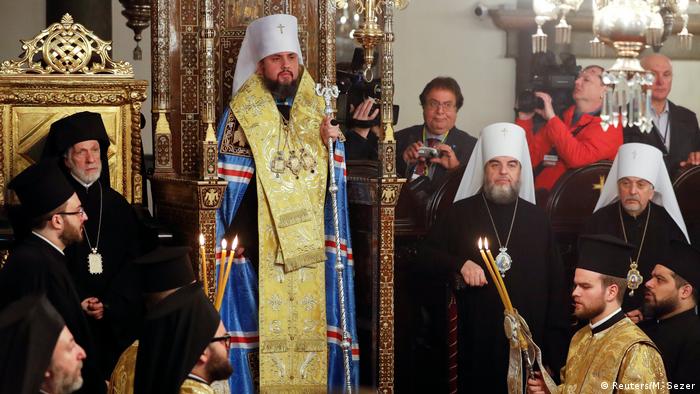 Poroshenko and the leader of the new Ukrainian church, Metropolitan Epifaniy, were also in attendance at Saturday's ceremony.

Relations between Ukraine and Russia devolved into hostilities in 2014 after Russia annexed Ukraine's Crimean Peninsula and violent conflict broke out in eastern Ukraine between pro-Russian rebels and the Ukrainian government. In the latest standoff in November, Ukraine imposed martial law after Russia captured three Ukrainian vessels in the Kerch Strait near Crimea.

The head of the Russian Orthodox Church's media relations, Vladimir Legoida, dismissed the Istanbul decree-signing ceremony. It "is just a paper, the result of restless political and personal ambitions. It was signed in breach of canonicity and this is why it has no power," he said in a Telegram message, according to Reuters news agency.

The political row between Kyiv and Moscow has been brewing on a number of fronts — including the church. Against the Moscow Patriarchate's will, Ukraine is now set to open its own national Orthodox church. (14.12.2018)

The Moscow branch of Ukraine's Orthodox Church has until now formally pledged allegiance to Russia's Patriarch Kirill, who has expressed clear support for President Vladimir Putin's offensive in Ukraine.