Russia's Orthodox Church has severed ties with the Constantinople Patriarchate, the leader of the worldwide Orthodox community. The move comes after it granted independence to the Ukrainian Orthodox Church from Moscow. 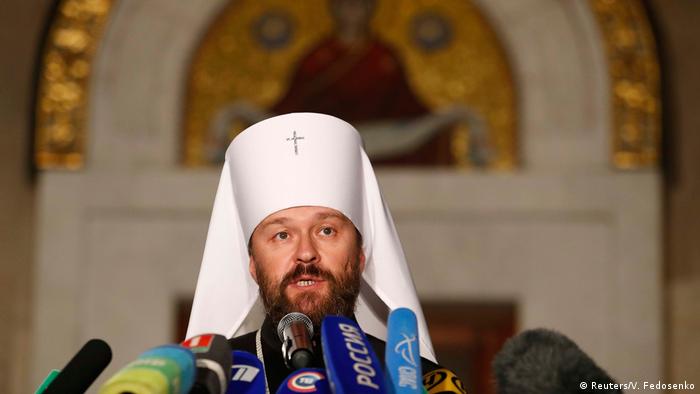 Metropolitan Hilarion of Volokolamsk, the bishop in charge of the Russian Orthodox Church's diplomacy, told journalists in Minsk on Monday that "a decision has been made to break the Eucharistic communion with the Constantinople Patriarchate."

The move means priests from the two churches cannot serve together while worshippers of one cannot take communion in the other.

It follows the Patriarchate of Constantinople's endorsement last week of Ukraine's request for an "autocephalous" (independent) church.

A spokesman for Patriarch Kirill, the head of the Russian Orthodox Church, said he hopes the dispute over churches in Ukraine will not lead to conflicts and clashes.

Last week, Hilarion warned that parishioners will not hand over churches to a new Orthodox institution willingly, according to Russian news agencies cited by France's AFP agency. "Of course, people will take to streets and protect their sacred sites."

In September, Istanbul-based Patriarch Bartholomew I of Constantinople sent two bishops to Ukraine in what was said to be a step towards the formal recognition of an independent church there. The move will likely lead to two parallel Orthodox churches, one under the auspices of the Moscow church and the other under Constantinople.

The Ukraine Orthodox Church has been part of the Moscow Patriarchate's orbit for hundreds of years. However, since Moscow's 2014 annexation of the Crimean peninsula from Ukraine, many Ukrainian parishes have rejected the Kremlin-backed Moscow Patriarchate. Ukraine formed a separate church and had been pushing for its recognition.

Ukrainian President Petro Poroshenko is expected to make independence from the Russian Orthodox Church a key issue as he plans a re-election bid in the 2019 Ukrainian presidential vote.