The Russian Orthodox Church has downgraded "diplomatic relations" with Istanbul-based Patriarch Bartholomew of Constantinople. Bartholomew I has been accused of "anti-canonical activities" for sending bishops to Ukraine. 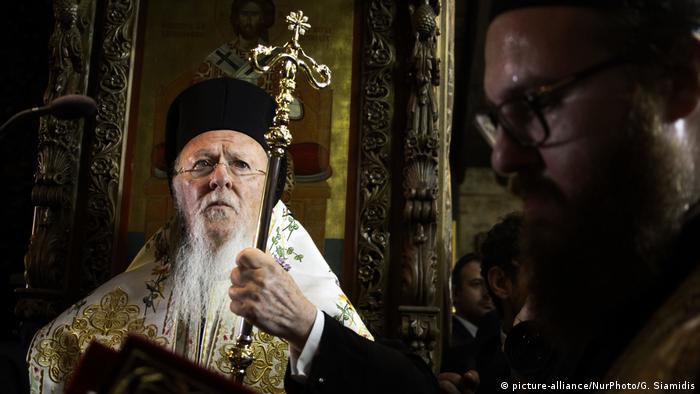 Russia's Orthodox Church said on Friday it had suspended relations with Patriarch Bartholomew I of Constantinople. The ruling body of the Russian church said it would no longer take part in structures chaired by Bartholomew, who is accused of sending two bishops to Ukraine in what is said to be a step towards formal recognition of an independent church there.

The Ukraine Orthodox Church has been part of the Moscow Patriarchate's orbit for hundreds of years. However, since Moscow's 2014 annexation of the Crimean peninsula from Ukraine, many Ukrainian parishes have rejected the Moscow Patriarchate. They have formed a separate church and have been pushing for its recognition.

Ukrainian pro-Western President Petro Poroshenko has called for Ukrainian Orthodox clerics to be granted full ecclesiastical independence from Moscow. Kyiv considers the Russian Orthodox Church a tool for the Kremlin to wield influence. The Moscow Patriarchate, meanwhile, sees itself as the only legitimate Orthodox Church in Ukraine.

Russian President Vladimir Putin's spokesman, Dmitry Peskov, said on Friday that the state can't interfere in the church's affairs, but that "preservation of the Orthodox unity is the only preferable scenario for Moscow, as well as for the entire Orthodox world."

Bartholomew I's title, Archbishop of Constantinople, refers to the old Greek name for Istanbul, Turkey's largest city. The city fell to the Muslim Turks in 1453 but has remained the historic seat of Orthodoxy.

Russia has, however, long been home to the world's largest Orthodox Christian Church and is currently the most powerful with the largest number of worshippers.

Protests in Ukraine have highlighted the division between the country's two main Orthodox churches. One has an independent streak and is protecting demonstrators from police. The other is subordinate to Moscow. (14.12.2013)