Ukraine should have its own Orthodox church, independent from Moscow, the Istanbul-based Ecumenical Patriarchate has ruled in a bitter row. Representatives of Russia's Patriarch Kirill slammed the move as "catastrophic." 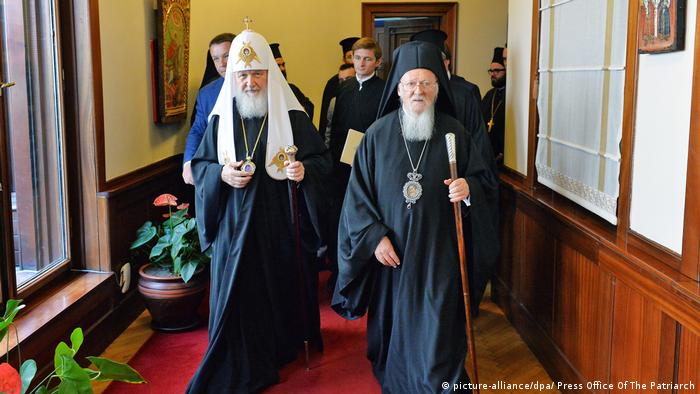 In a historic move on Thursday, Ecumenical Patriarch Bartholomew gave a green light to the request for full ecclesial independence filed by Orthodox clerics from Ukraine. The move prompted a harsh response from the Russian Orthodox Church, which has for centuries claimed jurisdiction over Orthodox believers in Ukraine.

The Istanbul-based Synod presided by Bartholomew "revoked the legal power of the Synodic letter from 1686 which granted the Moscow Patriarch the right (…) to name Metropolitan Bishops of Kyiv."

Patriarch Bartholomew also annulled the excommunication of the Kyiv-based religious leader Filaret, who spearheaded the push to cut ties with Moscow. Filaret's rank of patriarch has been "canonically reinstated" in a move sure to anger Russia's Patriarch Kirill.

Responding the decision, a spokesman for Kirill said that Bartholomew's Constantinople Patriarchate "crossed a red line" and made "catastrophic decisions for the entire Orthodox world."

Orthodox Christians in Ukraine are currently divided between a semi-autonomous branch loyal to Moscow and Kirill, the one lead by the Filaret, and third church which emerged in the 1920s as a response to Soviet repression. With Russia's annexation of Crimea in 2014 and the fighting in the east, the Ukrainian government and lawmakers joined the calls for ecclesial independence from Moscow.

"This is a victory of good over evil, light over darkness," he said in televised remarks.

The victory for Kyiv could boost Poroshenko's reelection bid ahead of March 2019 elections.

While there is no equivalent of the Catholic pope among Orthodox Christians, the Constantinople patriarch is often regarded as "first among equals" and wields a measure of traditional authority among other patriarchs.

This position has often put the Istanbul-based religious leader at odds with the patriarch of Russia, who has direct control of the biggest patriarchate in the Orthodox world. Currently, Russia's Orthodox Church boasts some 150 million believers, or roughly one half of all Orthodox Christians.

During the independence row, representatives of Moscow Patriarchate warned the resulting conflict could be comparable with the Great Schism from 1054, which split the Christian church into Catholics in the West and Orthodox Christians in the East.

Speaking to Rossiya-24 TV channel, senior Moscow Patriarchate official Igor Yakmichuk said the Moscow-based church will decide on its countermeasures after a Synod meeting set for next Monday.

"The response will be very decisive and harsh, it will be adequate to the situation that had developed," he said.