The Ukrainian president, in Istanbul for a state visit, met with the leader of the Orthodox Church in an effort to secure religious freedom from Russia. The head of the Moscow church called the accord "catastrophic." 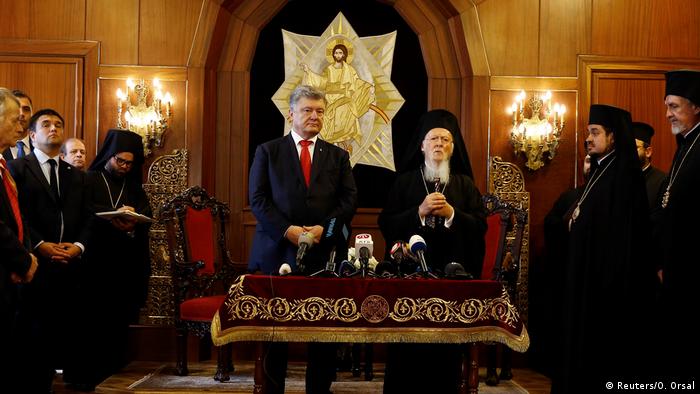 Ukrainian President Petro Poroshenko met with Ecumenical Patriarch Bartholomew I in Istanbul Saturday, where the two signed an accord paving the way for the independence of the Ukrainian Orthodox Church.

Bartholomew is seen as the "first among equals" of the patriarchs of the Orthodox Church. As such, he enjoys great authority, and on October 11 he agreed to recognize the Ukrainian church's independence from the Moscow Patriarchate.

The signing of Saturday's accord sets out the formal steps that the Tomos, as the Ukrainian Orthodox Church is known, will need to undertake to become independent of Moscow.

"Open the road to God for the Ukrainian nation"

"On behalf of the Ukrainian people, I am very grateful to His Holiness and to all the bishops of the Ecumenical Patriarchy for the extremely important and wise decision to open the road to God for the Ukrainian nation and its church," Poroshenko said after the meeting.

Observers see the move as a key to Poroshenko's reelection campaign. He has made the independence of the Tomos one of the cornerstones of the campaign ahead of elections to be held in March 2019.

Reactions from Patriarchate of Moscow, which sees itself as the rightful authority over the Ukrainian church, were predictably harsh. The Moscow church, which has close ties to the Kremlin, called the accord "catastrophic," claiming that Bartholomew was acting "outside the canonical domain" and in an "exclusively political" manner.

Moscow has warned the move threatens a global rift in the Orthodox Church. Although the Ukrainian church has been under the authority of the Moscow Patriarchate since 1686, the ongoing crisis between Kyiv and Moscow over Russian support for anti-government forces in eastern Ukraine has made that situation untenable to many in Kyiv.