Just as Ukraine is set for a new leader, Russia has offered passports to millions of Ukrainians. Experts say Moscow wants to cement power over occupied areas and stop population decline — but the move is a powder keg. 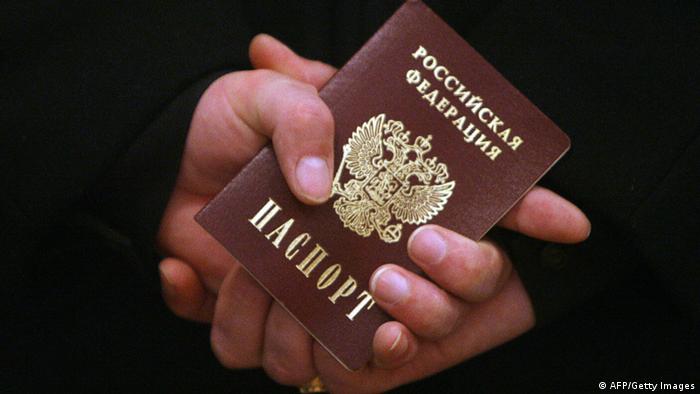 Russian President Vladimir Putin is in a hurry: Within the space of a week, he signed two decrees for accelerated naturalization of Ukrainian citizens, the most recent being on May 1.

Sharply criticized by Kyiv and its allies, the initiatives come at a time of uncertainty in Ukraine as defeated President Petro Poroshenko spends the last weeks of his term in office before his successor, Volodymyr Zelenskiy, takes the reigns.

With Putin's first advance on April 24, citizens in the eastern Ukrainian separatist regions of Donetsk and Luhansk were in his sights. Moscow justified the initiative citing "humanitarian reasons" such as making it easier for Ukrainians with expired passports to travel.

The second move significantly widened the target group: in the future, people born in Crimea but who left before Russia's annexation of the peninsula will be able to apply for a Russian passport by way of a "simplified procedure." The same applies to their relatives.

The offer is also aimed at all Ukrainians who lived in the areas of eastern Ukraine before war broke out in April 2014 and who now live elsewhere. In this sense it would include refugees and legal Ukrainian guest workers in Russia as well as internally displaced people in Ukraine.

Putin has defended his decree as justified by "the protection of human rights and freedoms." But it differs from Russian migration policy in that those who accept the offer are not required to renounce their Ukrainian citizenship in order to be naturalized as Russian, which would normally be the case.

Under the new, simplified application procedure, all of these qualifying Ukrainians could theoretically obtain Russian passports within three months. But there are millions of people who could be considered eligible under Putin's decrees.

The largest affected group would be those Ukrainians who lived in, stayed in or fled the Donbass coal-mining district before the outbreak of the war. In 2014, according to Ukrainian estimates, around 4 million people lived in the territories that Kyiv classified as being occupied by Russia. No more recent official figures are available.

The second-largest population group would be legal Ukrainian guest workers or refugees registered in Russia; a large portion of these people are likely to be from the Donbass region.

In 2018, Ukrainian Foreign Minister Pavlo Klimkin estimated the total number of Ukrainian citizens in Russia at around 3 million. If the figure were to also include Ukrainians born in Crimea, their children and relatives, then the number of potential candidates for a Russian passport is likely to be between 5 and 10 million. 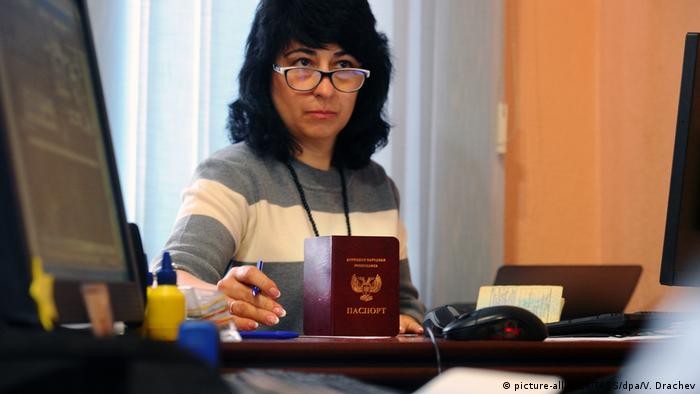 Prior to the recent decrees, people in the separatist provinces of Ukraine could not receive Russian passports — only those issued by the Luhansk or Donetsk People's Republic

Russia, however, does not appear to be preparing itself for an onslaught of applicants: Only two naturalization centers began test operations at the end of April in the Rostov-on-Don region near the eastern Ukrainian border.

But it seems Putin wants to go one step further: At the end of April, he said that he was considering extending the offer of Russian citizenship to all Ukrainians — some 40 million people.

While the timing of the offensive seems particularly favorable for Russia, Kyiv is speculating about the underlying motives. Ukrainian policy experts, such as Wilfried Jilge from the German Council on Foreign Relations, suspect that Moscow could be paving the way for military intervention, such as the one carried out in the breakaway Georgian region of South Ossetia in 2008.

"Vladimir Putin is continuing his policy of Russian expansionism in Ukraine," Jilge told DW, adding that the Russian strongman is "trying to stake his claim to the people in the occupied territories." 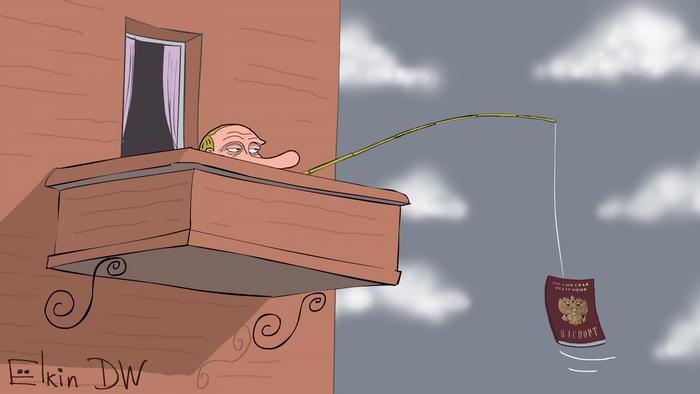 Jilge points out that the Kremlin would then be able to "protect" these Ukrainians with Russian passports "in emergencies, against the government in Kyiv." The expert warns that this provision of diplomatic rights could be a powder keg in Ukrainian-Russian relations.

A further clue about the Kremlin's motivation for the move could lie in Russia's demographics: The country's population is on the decline. In 2018, according to Rosstat, the federal statistics office, the population shrank nationwide for the first time in ten years — by around 100,000. The outlook for the coming years points to a continuing downward trend.

With Russian passports being issued not only for eastern Ukrainians but also with large-scale naturalizations, this downward population trend could be stopped, according to Margarita Simonyan, head of the international service of the Russian state international broadcaster RT.

Simonyan posted on Facebook that "all Russians" should be "brought home" from abroad, saying that this meant not only ethnic Russians who have been living in former Soviet republics since the collapse of the USSR but also people who feel connected to Russia.

In an interview with DW, US Special Representative for Ukraine Negotiations Kurt Volker blamed Russia for the stalemate in talks. He also reaffirmed the US's readiness to supply additional lethal weapons to Kyiv. (12.09.2018)