Thus far, the West has been reluctant to criticize the Ukrainian comedian-turned-president. But, with some reforms he has instigated appearing anti-democratic, a clear response is now needed, Roman Goncharenko writes. 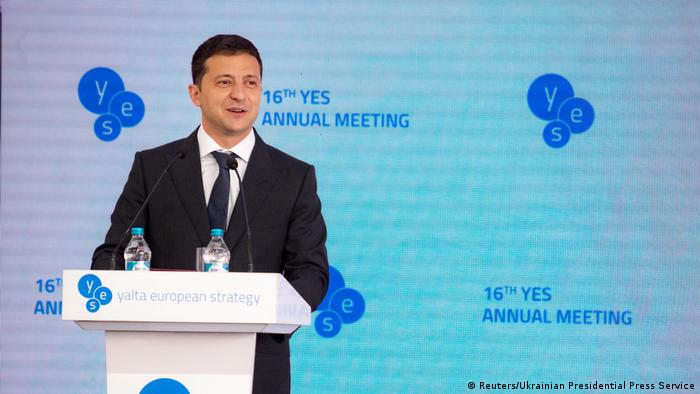 "Implement reforms at breakneck speed, without further delays" — that was what Volodymyr Zelenskiy pledged when he became Ukraine's president. Thus far, observers at home and abroad have applauded his approach, but now there are signals that the West no longer accepts each and every one of Zelenskiy's moves.

This week, for example, EU and Canadian ambassadors criticized a draft bill in which Zelenskiy proposed to halve the number of Supreme Court judges, namely from the current maximum of 200 to 100. Such a proposal should normally be preceded by a thorough analysis, the ambassadors wrote in a letter addressed to the parliamentary committees in charge — and they were right.

The Supreme Court is one of Ukraine's few relatively independent institutions, which saw its finest hour during the "Orange Revolution" of 2004 when it ruled that the rigged presidential election had to be repeated. The winner at the time was Viktor Yushchenko. When the defeated candidate, Viktor Yanukovych, became president later, he took his revenge on the Court by stripping it of its powers. Under his successor, Petro Poroshenko, it was re-established, and additional judges were installed. Zelenskiy now wants to get rid of half of them — which will weaken the Supreme Court.

Selection of judges as control tool

Western diplomats have also criticized the president's moves in regards to a key judicial selection commission. Zelenskiy proposes to apply a similar law to that commission's members, as well as various other judges who held office during the tenure of his predecessor, Poroshenko. For some judges, this would mean dismissal and an occupational ban. Zelenskiy has failed to provide a satisfactory justification for the move.

The "Lustration Law" of 2014 targets officials who held office during Yanukovych's tenure. Its ostensible purpose is "authority cleansing." In summer, Zelenskiy proposed to apply the law to all high-ranking civil servants of the Poroshenko era, thereby stripping them of their power as well, despite many criticisms. The new regulation comes across as Zelenskiy's attempt at gradually implementing the controversial concept all the same. The bill was approved on Thursday.

The president expands his power

In Ukraine, the never-ending spate of draft bills continues a trend that comes disguised as the will of the people but is, at its core, authoritarian. The most recent example is the premature dismissal of the electoral commission, approved by parliament on Friday. It is likely that the new personnel will be more well-disposed towards Zelenskiy's plans, including referendums, which were announced by the new president during his election campaign.

Changes to the constitution are of particular concern. Parliament is to be downsized from 450 to 300 delegates, which means it would be easier to control; lawmakers will become susceptible to blackmail, for example via abolition of immunity (which was already passed) or the proposed removal of the mandate from those who skip parliamentary sessions. At the same time, the president aims at obtaining the right to appoint and dismiss the heads of the State Bureau of Investigation and the National Anti-Corruption Bureau. Zelenskiy's draft bill on the ouster of the president put him on an equal footing with lawmakers only on a superficial level. Those who look at the issue with scrutiny will find that the opposite is the case, because an already difficult impeachment procedure is now virtually impossible.

Looking at something with scrutiny, however, is currently an arduous task in Ukraine. The multitude of draft laws on highly complex issues makes it difficult even for experts to stay on top of things. To an even higher degree, this also affects lawmakers, most of whom — like the president himself — until recently were relatively clueless regarding political activity. This could actually be one of the reasons why the presidential majority in Ukraine's parliament approves the flood of legislation at top speed. As opposition politicians are few and far between, they hardly have a chance of meeting the requirements of their supervisory role.

As Ukraine's most important financial backer, the West has a lot of leverage over the country, but it's facing a dilemma. It's hard to criticize someone like Zelenskiy, who received 73% of the vote in the presidential election and whose compatriots trust him to a degree that is without precedent. More importantly, there seems to be hope in the West that, with Zelenskiy at the helm, a solution to the conflict with Russia could be found. The recent exchange of prisoners between Moscow and Kyiv has strengthened those hopes. It's possible that the West, in the event of a rapprochement between Russia and Ukraine, will be tempted to turn a blind eye to aberrations in Ukraine's domestic politics. This would be understandable, yet short-sighted.

One is left with increasing suspicion that Zelenskiy is expanding his power at the expense of democracy. If Western countries tolerate his approach, they will lose credibility. In addition, they run the risk — in the medium term — of having to tackle the consequences of a new uprising in their immediate vicinity. Hitherto muted criticism should become more vociferous. Ukraine needs a clear message, not only from western diplomats. Political heavyweights in Europe and in North America alike should position themselves. Zelenskiy's grace period is over.

Ukraine's new parliament meets for the first time, appointing Oleksiy Honcharuk as PM. The former activist and lawyer, who has only three months' government experience, pledged to end corruption and boost the economy. (29.08.2019)

Ukraine's new president swept to power by vowing to fight corruption. On the heels of Volodymyr Zelenskiy's election success, his predecessor and the high-profile mayor of Kyiv are now in the anti-graft crosshairs. (30.07.2019)

Opinion: In Russia, cornered Alexei Navalny fights back 18h ago