Germany's top diplomat Heiko Maas said the war in eastern Ukraine "must be stopped." while meeting his Russian colleague Sergey Lavrov in Moscow. The two diplomats clashed on the issue of media freedom. 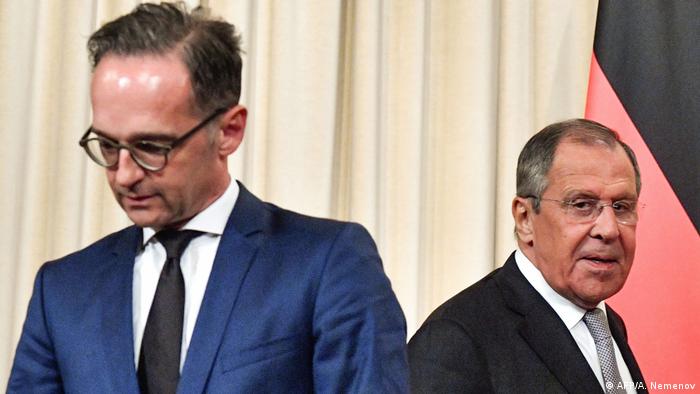 Germany's foreign minister, Heiko Maas, called for top diplomats from Russia and Ukraine to meet for a renewed push to end the conflict in eastern Ukraine.

"There should not be another victim in this war," Heiko Maas said after talks in Moscow with his Russian counterpart, Sergey Lavrov on Wednesday. "This must be stopped," he added.

The conflict, in which more than 13,000 people have been killed, has been going on for five years between pro-Russian rebels and the Ukrainian military near the Russian border.

Eastern Ukraine – hopes that peace could be within reach

The peace effort, initially brokered by Germany and France in 2015, has gained new momentum thanks to Ukraine's newly elected President Volodymyr Zelenskiy, Maas said in Moscow.

Zelenskiy, who took office in May of this year, has been pushing for renewed talks with Russia and a new summit in Minsk, which would also be brokered by Germany and France.

"There is, in terms of the ceasefire, separation of forces and implementation of the Minsk agreement, finally again hope for a light at the end of the tunnel," Maas said, in reference to a 2015 peace deal signed in Belarus.

Germany and France as peace brokers

French President Emmanuel Macron has been supportive of the initiative during talks with Russian President Vladimir Putin this week. Macron said he wanted to attend a summit with the leaders of Ukraine, Russia and Germany — the so-called Normandy format — soon to try and resolve the conflict.

"There is a real opportunity to put an end to the conflict that has been going on for five years," he told reporters, saying there had been "real changes" since Zelenskiy came to office.

Putin, in turn, said there were "grounds for cautious optimism" regarding chances of peace in eastern Ukraine.

During his press conference with Lavrov, Maas called for the release of the Ukrainian sailors who were detained by Russia near the Kerch Strait in November 2018, saying that would be "substantial progress."

The two diplomats argued over allegations by the Russian Foreign Ministry, which blamed western media for interfering with Russia internal affairs during the recent series of anti-government protests.

Several thousand people have been detained over the marches, including some journalists working for international news outlets. A DW correspondent was also briefly detained.

On Wednesday, Maas rejected the Kremlin claims, saying it was "not realistic — neither now nor in the future — to believe that Germany or German media want to exert influence on or even instigate internal political developments."

German Foreign Minister Heiko Maas has underlined Berlin's support for Kyiv on his first visit to the front line in eastern Ukraine. He also announced a new round of peace talks aimed at ending the conflict there. (01.06.2018)