The French and Russian leaders have said the change of power in Ukraine has boosted chances of peace in its east. But they were less in agreement over Syria — and how to deal with protests.

French President Emmanuel Macron and his Russian counterpart, Vladimir Putin, both expressed hope on Monday that the election of Volodymyr Zelenskiy as Ukrainian leader had boosted chances of ending a long-running conflict in eastern Ukraine — a conflict Macron described as an "irritant" in EU-Russia relations.

Speaking at a press conference at his summer residence in southern France, Macron said he wanted to attend a summit with the leaders of Ukraine, Russia and Germany — the so-called Normandy format — soon to try and resolve the conflict in which more than 13,000 people have died.

"There is a real opportunity to put an end to the conflict that has been going on for five years," he told reporters, saying there had been "real changes" since Zelenskiy came to office in May.

Putin, in turn, said there were "grounds for cautious optimism" regarding chances of peace in eastern Ukraine.

Moscow has come under frequent criticism from the EU and other international entities for its involvement in the conflict. Russia denies any direct participation.

Willing to return to G8

Russia was thrown out of what was the Group of Eight (G8) leading economies in 2014 after Moscow annexed Ukraine's peninsula of Crimea in an internationally condemned move that came shortly before the conflict pitting Russian-backed forces against government troops in Ukraine's Donbass region.

Putin indicated on Monday that Russia would be prepared to rejoin if invited.

"We would not refuse, he said, adding that "any contacts with our partners, in any format, are useful."

Macron said, however, that "a return to the Group of Eight as well as a return to fully normalized relations with the European Union requires a solution to the Ukraine question."

The two leaders were less in agreement over Syria, with Putin defending Moscow-backed Syrian military action against what he called "terrorists" in Idlib province, while Macron spoke of children being killed by bombs.

The Idlib region, home to some 3 million people, has experienced airstrikes and shelling by the government and Russian troops since April, with hundreds of people killed, many of them civilians. The area is the last major jihadi-run holdout in the country, which has been embroiled in civil conflict since 2011. 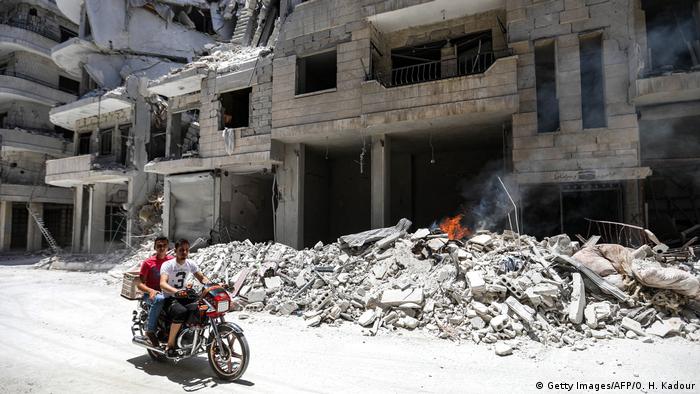 Idlib, the last major jihadi-run bastion in Syria, has been targeted by frequent bomb attacks since April

Putin also bristled at Macron's urging him to respect democratic principles in Russia after weeks of anti-government protests in Moscow. Russian police have faced accusations of brutally suppressing the rallies.

In response to a question on the protests, Putin said that Russian authorities had dealt with them in accordance with the law and that he didn't want a situation like the French "yellow vests" to occur in the Russian capital. 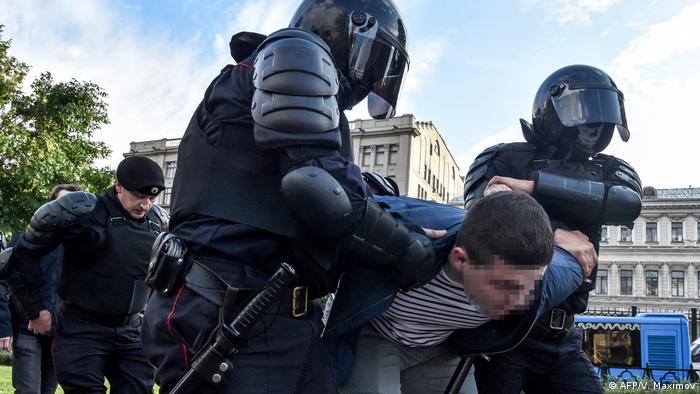 "We all know about the events linked to the so-called yellow vests during which, according to our calculations, 11 people were killed and 2,500 injured," he said.

"We wouldn't want such events to take place in the Russian capital and will do all we can to ensure our domestic political situation evolves strictly in the framework of the law," he added.

Macron responded that in France, people could "express themselves freely and demonstrate freely ... but they cannot disturb public order." 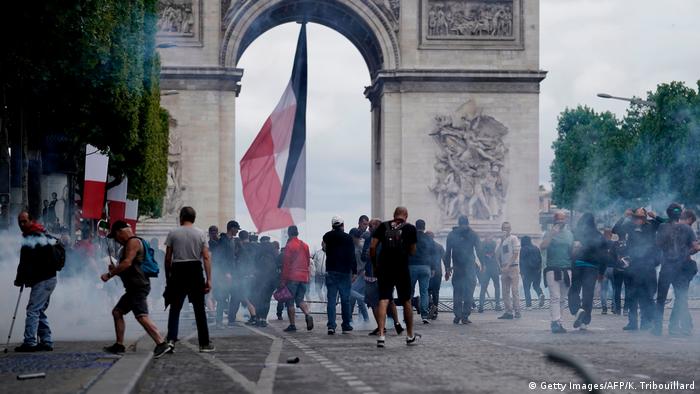 The yellow vest protests, named after the high-visibility motorists' jackets donned by the participants, began in November as rallies against rises in fuel taxes but developed into sometimes violent demonstrations against the government fueled by a more general discontent with the political class.

The protests in Moscow were triggered by authorities barring opposition candidates from running in an election for the city's legislature in September.

The meeting in Fort Bregancon represents an attempt by Macron at a rapprochement with Moscow, which has frequently been at odds with the international community, and more particularly the EU, in past years over several issues, including its involvement in the conflicts in Ukraine and Syria.